The impeccably dressed men and women didn’t look like they belonged in Israel. They strolled in promptly at 8am and quietly sipped tea or coffee while chatting politely in languages like Danish and Nepalese But in fact, not only do they belong here, they are some of Israel’s most distinguished residents, albeit temporarily.

Some 400 Ambassadors and Military Attaches, nearly Israel’s entire diplomatic community, gathered at the Jerusalem Waldorf Astoria last Wednesday for the Fourth Annual Jerusalem Post Diplomatic Conference. A stellar list of Israeli Statesmen, including Prime Minister Benjamin Netanyahu, had been lined up by Jeruslaem Post Editor-in-Chief (and MC for the day) Steve Linde, to address the diplomats on urgent issues facing Israel today. “The aim of the conference is to present Israel’s case from a variety of perspectives”, explained Linde in the days leading up to the event, “to strengthen public relations between the State of Israel and the diplomats who reside here, and through them, hopefully with their countries as well.”

“The diplomatic community looks forward to this event every year, it instills a sense of unity among the diplomats and between them and the Israelis too, but since the start of the ‘situation’ it’s almost all people talk about. They feel a sense of unity with Israeli people and are very concerned”, said Ambassador Yitzchak Eldan, President of the Ambassador’s Club of Israel, referencing the recent spate of terror attacks in Israel, “This is a real chance to explain things from the Israeli point of view and our diplomats are eager to listen.”

A worthwhile objective under any circumstances, but especially timely at the moment. With almost daily terror attacks being perpetrated against Israelis, and the world still stunned by the horror that unfolded in Paris last week, there was a sense of solidarity in the room that was palpable even before people found their seats. That was fortunate, as the solidarity theme took a hit off the bat with the first speaker of the day, opposition leader Isaac Herzog, took the mike and promised to do everything in his power to topple the government, as fast as possible.

Solidarity got its mojo back later in the morning, when Prime Minister Netanyahu climbed on the stage shoulder to shoulder with a tall, dark, handsome man who looked like he hadn’t slept for a week. His name didn’t appear in the original program because until last Friday, Ambassador Patrick Maisonnave of Paris was supposed to be an audience member.

A moment of silence observed in memory of the French victims. At its conclusion Netanyahu said, “In Jerusalem, today, we stand with the people of Paris”.

“Terrorism is terrorism”, said Ambasador Maisonnave, “Not only when it affects us on such a horrendous scale, also when it hits Israel. And let me take this opportunity to have a thought for all the victims of the last few weeks, their beloved ones and the injured.”

Off to the side, Ambassador Dan Shapiro exchanged some banter with JewishPress.com Editor-in-Chief Stephen Leavitt.

“During these difficult days, when Israel is combating murderous terrorism, it’s inconceivable for it also to have to fight for its place in the world and against efforts to enforce an economic and diplomatic boycott against it. An event such as this carries immense importance for public diplomacy.” 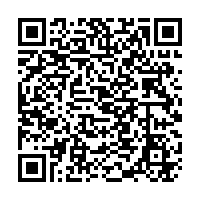