The logo for the new US Space Force has a spiffy design, one that represents the newest branch of America’s military’s mission to “boldly go where no man has gone before.”

Trump just announced the new logo for the Space Force. The other is Star Trek Starfleet Command. pic.twitter.com/S7NeYdjR4C

Though not everyone on Twitter agreed there was a connection:

For those excitedly tweeting that Trump stole the Star Trek logo!!!!, the patch on the left was the existing Air Force Command logo.

The same one I wore as a Lieutenant in 2005. pic.twitter.com/mYb60YioBP

In fact, the emblem does bear a remarkable resemblance to the one force that has, indeed, done just that; at least, in the minds of the millions of viewers who even today stop at nothing to watch the latest form of Star Trek’s incarnations via internet, cable and anywhere else it’s available.

And it’s clear that President Donald Trump is a fan.

After consultation with our Great Military Leaders, designers, and others, I am pleased to present the new logo for the United States Space Force, the Sixth Branch of our Magnificent Military! pic.twitter.com/TC8pT4yHFT

By the way, did you know there is a Wikipedia page devoted to the Space Force? (Me either.)

There is also an official SpaceForce fan club, believe it or not, “representing the spirit of the US Space Force.” You can find those folks on Twitter, and also on Facebook. 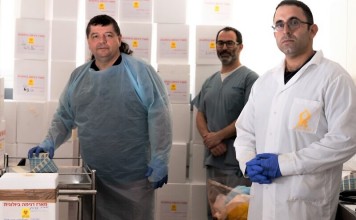