European officials have recently sent messages to Palestinian Authority (PA) head Mahmoud Abbas’ office demanding that he first publish an election decree and publicize the date for the elections before they intervene and pressure Israel into allowing the PA to hold the elections in Jerusalem, a senior source told TPS.

Abbas asked the Europeans to act to pressure Israel to approve ballots in Jerusalem for the pending PA elections. Abbas himself has announced that he PA will hold elections after almost 14 years but has yet to publish an official decree or announce a date for elections.

He has reportedly requested from Israel to allow voting for the PA in Jerusalem, but his request has been ignored.

According to the PA source, various elements in Europe are not at all sure of Abbas’ intention to go through with the elections and therefore want to avoid an embarrassment and a clash with Israel in the absence of a formal order calling for elections in the PA.

Abbas is disappointed with the European position and now fears that the publication of the order under the current Israeli government will put him in a difficult position and force him to fold under public pressure to go to elections, without holding them in Jerusalem.

It is widely believed in Ramallah that Abbas is conditioning the elections on the placement of the ballots in Jerusalem so that he can later explain their cancellation, in light of Fatah’s fear of failure and a loss to Hamas.

It is further estimated that even if Israel approves the placing of the polls in Jerusalem, Abbas will seek another excuse not to hold the elections.

However, messages sent from Ramallah to Israeli officials indicate that if the Blue and White party wins the upcoming Israeli elections in March and Benny Gantz becomes prime minister, Abbas will try to coordinate with them in advance the placement of polling stations in eastern Jerusalem and Abbas will publish a date for the PA elections.

The PA source estimates that if the elections are held, they will be postponed at least until July, as the PA’s Election Commission asked to hold them after the Muslim month of Ramadan and after the high school exams are held in June since most polling stations will be placed in schools. 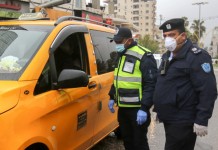