Deviating from its focus on the global response to the coronavirus pandemic, the annual assembly of the United Nation’s World Health Organization yesterday held a four-hour session focused on Israel, which was condemned in speeches by some 30 delegations, including Iran, Syria, North Korea, Cuba, Malaysia, Lebanon and Venezuela, for allegedly violating the health rights of Palestinians and Syrians in the Golan Heights.

The session concluded with a vote of 78 to 14, with 32 abstentions, to adopt a resolution, co-sponsored by Syria, Cuba, Turkey, Qatar and the Palestinian delegation, requiring the WHO to hold the same anti-Israel debate at next year’s assembly, and to prepare another report on the “Health conditions in the occupied Palestinian territory, including east Jerusalem, and in the occupied Syrian Golan.”


Iran accused Israel of an “inhuman blockade” which it said had a “profound impact on the health sector.”

In a powerful speech to the WHO session, Israeli Ambassador Meirav Eilon Shahar recalled how, in 2017, the WHO buried its own expert report on the health conditions in the Golan—because it was favorable to Israel. The report, which the WHO declined to publish under Syrian pressure, found that, “There were no significant barriers for residents to access primary, secondary or tertiary care, even for the most vulnerable members of the community.”

Exposing Cynical Politics of World Health Organization
UN Watch, the first organization to break the news and respond, condemned the cynical politicization of the world’s top health agency at the expense of focusing on the COVID-19 pandemic and other vital global health priorities and emergencies.

WHO Singles Out Israel, Ignores Syria, Yemen, Venezuela
Out of 23 items on the current world health assembly’s Agenda, only one, Item 17 targeting Israel, focused on a specific country.

There was no agenda item or resolution on any other country, conflict, civil war or political impasse—not on Syria, where hospitals and other medical infrastructure are repeatedly and deliberately bombed by Syrian and Russian forces; not on war-torn Yemen, where 14 million are in dire need of health assistance; and not on Venezuela, where the health system is in a state of collapse and 7 million people are in need of humanitarian assistance.

Session Falsely Accused Israel of Violating PA & Syrian Health Rights
Thursday’s four-hour assault on Israel at the WHO promoted the lie that Israel is harming Palestinian health rights. Yet the opposite is true.

Despite the conflict, Israel grants entry to tens of thousands of Palestinians who receive top-level medical care at Israeli hospitals. Even the UN’s own Middle East peace envoy hailed Israel’s ‘excellent’ coordination and cooperation with Palestinians amid the coronavirus pandemic.

Moreover, it’s particularly absurd for the WHO to enact a resolution effectively accusing Israel of violating the health rights of Syrians in the Golan, when in reality Israeli hospitals have provided life-saving treatment to Syrians fleeing to the Golan from the Assad regime’s barbaric attacks.

France, Belgium, Ireland in EU Minority Supporting Biased Resolution
The vote was 78 to 14 on the resolution, with 32 abstentions and 56 absent.

UN Watch applauded numerous countries which this year shifted their votes from Yes to Abstain, including Sweden, Norway, Cyprus, Finland, Greece, Iceland, and Uruguay. Norway explained that the WHO was not a forum for political matters. There were 32 abstentions this year, 11 more than in 2019.

However, amid a global pandemic, the minority of EU member states and other democracies who voted for the resolution should be ashamed, including France, Spain, Belgium, Switzerland, Ireland, Poland, Portugal, Japan, India, New Zealand, Luxembourg and Monaco.

These countries have now encouraged the continued hijacking of the world’s health priorities, and the diversion of precious time, money, and resources to fight global disease, in order to wage a political prosecution of Israel.

Anyone who has ever walked into an Israeli hospital or clinic knows that they provide world-class health care to thousands of Palestinian Arabs—including over the past month to Palestinian negotiator Saeb Erekat—as well as to Syrians fleeing Assad.

Those that voted no like last year were the US, UK, Australia, Brazil, Canada, Czech Republic, Germany, Honduras, Hungary, and Israel, while those that changed their votes to no this year were Slovenia, Cameroon, Eswatini and Micronesia.

In addition to voting against the resolution, the US, the UK and Canada took the floor to object to the politicization of the forum.

Resolution Mandates Renewed Report & Debate on Israel
The resolution mandates the WHO director-general to prepare another report next year, to be submitted to the 74th World Health Assembly in 2021, thereby ensuring another day devoted to vitriolic accusations against Israel by Iran, Syria, Venezuela and others.

By enacting the resolution, the assembly also adopted a WHO report which claims that “Palestinians living under chronic occupation are exposed to high levels of violence.” Hamas and Islamic Jihad were nowhere mentioned.

The report accused Israel of “violence towards demonstrators,” yet completely ignored the role of Hamas and other terrorist groups in orchestrating violence and encouraging demonstrators to approach the hostile area of the Gaza-Israel border.

The WHO’s report lauded UNRWA’s role in training 2,000 staff members in providing mental health services, but omitted the role of UNRWA teachers’ incitement to terrorism and violence on the mental health of Palestinian children. 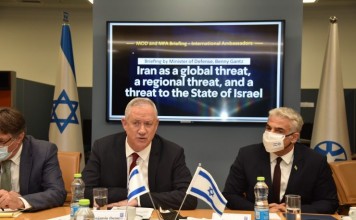