The All-Party Parliamentary Group against Anti-Semitism has complained to Amazon that its electronic home-device assistant, Alexa, was giving anti-Semitic answers to questions about Jews, Israel, and the Holocaust.

Non-Jewish MPs found that, in answer to a query on whether Jews controlled the media, Alexa replied, “Jew Watch claims that Jews control the world’s financial systems and media.”

Amazon has launched an inquiry into the matter.

Prime Minister Boris Johnson’s chief adviser, Dominic Cummings, who left last month after a power struggle in 10 Downing Street, has been succeeded by the chairman of World Jewish Relief.

The new chief of staff, Daniel Rosenfield was educated in Manchester and went on to work at the Treasury under former Chancellors Alistair Darling and George Osbourne. He subsequently had a successful career in the financial sector.

A member of the Jewish Leadership Council, Rosenfield has described Judaism as “pretty central” to his life.

Shiva services will be allowed in United Synagogue shuls as the UK emerges this week from lockdown and adopts a tier system to fight the Covid-19 pandemic.

During the pandemic, services have not been allowed in homes. The new shul shiva services can be either part of a regular service or a separate service once a day with a maximum of 15 attendees, plus the rabbi, for up to an hour. Attendees will not be allowed to sit with the mourners, but can pass by at a safe distance to show respect.

In tier 2 areas like London, socially-distanced shiurim, support groups, and meetings with the rabbi or welfare team, may now take place in shuls. These cannot take place in tier 3 areas like Manchester.

Funder Of Arutz Sheva Passes Away

Yankel Plitnick – a supporter of Israeli settlements and early funder of Arutz Sheva – passed away last month at the age of 97. He was the son of Rabbi Zalman Plitnick, Liverpool’s communal rabbi.

After running a Liverpool kosher wine shop, Plitnick left for London where he became a successful property developer. In Hendon, he funded the youth minyan at Hendon Adath Yisroel Congregation.

The shul’s former leader, Rabbi Pinchas Roberts, told The Jewish Press, “He was very charitable. He never married, but he had a sister Esther Shlomowitz in Lakewood. I heard that whenever one of her children married and needed a house or a flat, he would buy it. He did things very quietly.”

Likud-Herut UK chairman Zalmi Unsdorfer said, “At that time, Israel’s left-wing establishment had all three major Hebrew newspapers in their hands, as well as the two main television channels and almost all of the radio stations. The only dissenting voice for the right and the promotion of Greater Israel was being broadcast from the MV Eretz Hatzvi [ship] anchored just outside Israel’s territorial waters. From such choppy beginnings Arutz Sheva grew into the formidable media presence it is today.”

Plitnick also funded institutions all across Israel. He was buried in Bet Shemesh. 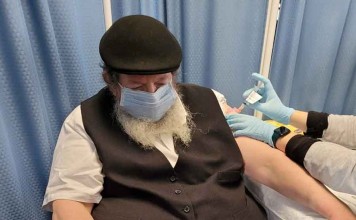