650 Israel-loving businessmen from 50 countries, including the US, Europe, China, and India, will come to Israel to seek business opportunities at a conference on “Israeli Innovation for Humanity” to be held by ARISE (Alliance to Reinforce Israel’s Security & Economy) on December 4, 2019, in Rishon Lezion.

The conference will connect businessmen from all over the world to businesses in Israel and to showcase the marvels of the Israeli economy, technology, innovation and startups, especially those that improve the quality of life and that offer practical solutions to current challenges in the field of health, agriculture, education, transport and more.

Attorney Calev Myers, Founder and President of the organization, has been at the forefront of the fight against BDS for years, said similar conferences held by the organization in the past have led to many millions of dollars worth of business collaborations between Israelis and foreign businessmen. According to him, the appropriate Zionist response to the BDS movement is to promote trade and commerce with Israel.

The conference is held in cooperation with the Israel Export Institute, the Israel Federation of Bi-National Chambers of Commerce, the Israel Manufacturers Association and the Israel Innovation Institute.

Myers emphasized that ARISE and its team are making great efforts to bring business delegations to Israel. So far, 650 businessmen, including members of the International Christian Chamber of Commerce (ICCC) from 50 countries, a delegation of American businessmen from the OCEAN network in Cincinnati, a delegation of businessmen from the Karunya network in India, a delegation of corporate executives from the CEO Forum, and others, have promised to attend the conference. Most of the participants are Israel-loving Christians who run small, medium, large and very large businesses. Some manage huge companies with billions in annual revenues and see the conference as an opportunity for potential investment in Israeli companies, businesses and technologies.

Among the attendees this year will be Los Angeles Angels MLB team’s designated hitter Albert Pujols and his wife Deidre. Pujols, 39, a native of the Dominican Republic, has spent most of his life in Los Angeles and as a businessman and successful entrepreneur was a founding partner of ARISE.

A shark-tank business competition will take place at the conference, during which a number of Israeli companies and businesses will present their products for 5 minutes, followed by another 5 minutes questions and answers by a panel of judges consisting of experienced and successful business people.

Following the presentation of the products by the competing companies, a crowd vote will be held (through a crowd-voting app) and the product chosen by the majority will receive a $10,000 grant from ARISE. The participating businesses will showcase their products at stands in the lobby.

According to attorney Nir Kimhi, who is one of the organizers, most of the participants in the conference are Evangelical Christians, who will also tour the country. 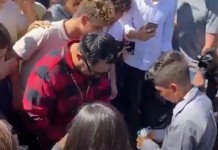