Music icon Lionel Richie snubbed the women’s anti-war group Code Pink after the organization, which is active in the anti-Israel boycott campaign, launched a petition urging the singer to cancel his upcoming show in Israel.

CodePink: Women for Peace penned an open letter claiming that Richie’s scheduled Sept. 12 concert in Tel Aviv, as part of his “Hello” tour, “will act as an endorsement of Israel’s brutal systems of military occupation and apartheid,” and asked the artist, “Please act now for freedom, dignity, and equality for all in Israel/Palestine. Please cancel your concert in Israel.”

Not long afterwards, CodePink’s national co-director, Ariel Gold, attacked the singer, saying, “Don’t be such a snowflake. You closing your eyes to what is happening to Palestinians won’t stop it from happening or you from being complicit if you perform in Israel.”

His September show will be Richie’s first performance in Israel. The “Hello” singer and songwriter has been a longtime supporter of Israel, and in 2013 he entertained guests at a fundraiser in Los Angeles for the Friends of the IDF, according to The Jerusalem Post.

This is not the first time that CodePink has launched a campaign aimed at convincing artists to cancel their concerts in Israel. The group attempted to do the same with pop icon Jennifer Lopez, but to no avail; she performed on Thursday night in Tel Aviv to a sold-out crowd of nearly 50,000 in Tel Aviv. 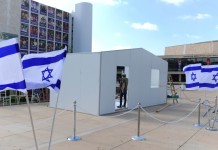