A total of 27 IDF soldiers died over the course of 2019, compared to 43 in 2018, according to data published by the IDF’s Manpower Directorate on Wednesday.

Of these, two soldiers were killed in combat operations, one in a terrorist attack, five in car accidents, 12 in suicide, two died of disease and three in unspecified “other circumstances.”

The figure on soldiers killed in combat included Sgt. First-Class Zachary Baumel, who was killed in 1982 in the First Lebanon War but was returned to Israel and buried in Jerusalem only this year.

Sgt. Gal Keidan​, 19, was stabbed to death by an Arab terrorist in March while securing the Ariel Junction in Samaria.

Dvir Sorek, considered officially enlisted in the IDF, was stabbed to death outside his yeshiva in Migdal Oz in August.

The past year also saw the lowest number of “seriously injured” casualties in the past decade, with 35 soldiers sustaining severe wounds as opposed to 41 in 2018.

The IDF emphasized that the number of deaths in suspected suicide incidents over the past decade is declining.

The IDF has set into motion a comprehensive process to investigate and learn from every such incident with the objective of minimizing them.

The IDF has also initialized several programs to combat car accidents and improving infrastructure inside and outside camps.

Brigadier General Michel Yanko, head of the Manpower Directorate, noted that 2019 was the year with the lowest number of casualties since the IDF was established, but “at the same time, it is important to say – every casualty is one too many.”

The IDF will continue “to explore and investigate” these issues “from the chief of staff level to the last of the commanders. We will make every effort to reduce the number of casualties each year,” he stated. 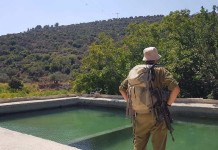