Israeli President Shimon Peres used his speech to the AIPAC Policy Conference to declare that Iran “will be stopped” and insist that Israel has “a friend in the White House.”

In a wide-ranging speech, Peres also spoke of Israel’s unremitting duty to continue pursuing “a peace based on a Two State Solution,” despite the fact that the Middle East was being rocked by a “storm” of change. He said that the principle of the “The Two State solution” was “a paramount Israeli interest.”

The dovish President also peppered his speech with harsh words about Iran, continuing the rhetorical battle that has picked up frequency and intensity in recent months. He spoke of “Iran’s ambition is to control the Middle East, so it can control a major part of the world’s economy.”

“Peace is always our first option,” he continued. “But, if we are forced to fight, trust me, We shall prevail…The United States and Israel share the same goal – to prevent Iran from developing a nuclear weapon. There is NO space between us. Our message is clear: Iran will not develop a nuclear weapon.”

Peres also spoke reassuringly about US President Obama, saying that his “commitment to Israel is deep and profound.” To the audience, Peres insisted: “We have a friend in the White House.”

On a personal note, the Israeli president reminisced about his grandfather, Rabbi Tzvi Melzer, who had accompanied Peres to the train station on his way to Israel. Peres said that his grandfather “whispered in my ear only three words, ‘Shimon…. stay Jewish.'” Not long after, his grandfather and the remaining Jews were murdered by the Nazis.

“What remained was my Grandfather’s legacy, His last words to me ‘Stay Jewish.'” 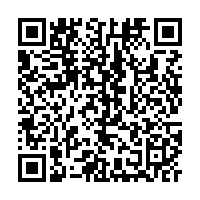