Rabbi Rafi Goodwin was attacked in the Limes Estate area in Chigwell by two young men, near his synagogue in Essex this weekend.

The rabbi, in his 30s, was taken to King George’s Hospital with cuts to his head and one eye, according to the British Jewish News outlet.


“Antisemitic language was used during the assault by two youths,” the Jewish News reported.

“It is believed that two teenagers stepped out in front of the victim’s vehicle while he was driving; they shouted at him and spoke in a derogatory way about his religion before going on to damage his car,” said Essex police in a statement. “When he got out of his car to confront them, he was attacked with an unknown object, causing him to require hospital treatment.

“During the attack the victim’s phone was also stolen. The two boys, believed to be aged between 15 and 18, are believed to have left the scene on foot.” Police said the two suspects were described “as being of Asian ethnicity… Both wore black jackets and [one] wore grey tracksuit bottoms.

“We know this incident may be concerning for those in the local area and we are working quickly to identify those responsible and to liaise with community leaders for any further support for those impacted,” police said.

“It is thought he wasn’t targeted as a rabbi or Jew,” the Jewish News wrote, adding “there was no indication of motivation linked to the Middle East – but that it was sparked by a road rage incident.”

The security officer of the community underlined that members should not walk to and from synagogue alone.

It’s not clear why a news outlet would believe a rabbi — attacked by two ‘youths’ yelling antisemitic slurs — was not “targeted as a rabbi or Jew,” especially after synagogue members are warned not to walk alone to and from prayers.

Rabbi Moshe Freedman, rabbi of the West End Synagogue, asked the public to pray for his “dear friend and colleague” Rabbi Rafi Goodwin “who has been brutally attacked this morning near to his synagogue in Chigwell.’

Please pray for my dear friend and colleague Rabbi Rafi Goodwin who has been brutally attacked this morning near to his synagogue in Chigwell. His Hebrew name is Harav Yirmiyahu Pesach ben Kreina Deborah.

There has been an “upsurge in antisemitism” on the streets of London since the start of Operation Guardian of the Walls between Israel and Hamas, the Jewish News noted.

“This behavior was utterly shocking and will not be tolerated. I understand that this would have caused considerable concern within the community and we have arranged extra patrols in the St John’s Wood and Golders Green areas this evening,” said Police Superintendent Jo Edwards.

“Hate crimes are inexcusable and have no place in our city,” tweeted London Mayor Sadiq Khan. “Londoners can expect to see high visibility police patrols and the Met Police have been working closely with the Community Security Trust.”

Anti-Semitic Convoy and Demonstrations of Threats and Hate
Anti-Semites drove a convoy of vehicles flying Palestinian Authority flags through the north London Jewish community of Finchley, shouting “F*** the Jews … F*** all of them. F*** their mothers, f*** their daughters and show your support for Palestine. Rape their daughters … Please do it for the poor children in Gaza.”

Four arrests were made by Metropolitan Police in connection with the anti-Semitic convoy. According to police, “Four men were arrested on suspicion of racially aggravated public order offenses. They were taken into custody at a west London police station where they remain,” police said.

“The blatant and open anti-Semitism on display today, deliberately targeting areas with large Jewish populations, is nothing short of incitement and I have urgently raised the matter with the Home Secretary, Commissioner and Mayor,” said the MP for Finchley and Golders Green, Mike Freer.

Gideon Falter, Chief Executive of the Campaign Against Antisemitism told MailOnline, “This convoy and demonstration were utterly predictable and preventable. They have been advertised for a week.

“Jews have had to witness the shocking reality that in 2021, people can drive through the capital of our country calling for our daughters to be raped, with nobody in sight to protect us or take action,” said Falter.

There is no place for antisemitism in our society. Ahead of Shavuot, I stand with Britain’s Jews who should not have to endure the type of shameful racism we have seen today.

British Prime Minister Boris Johnson wrote in a tweet following the events, “There is no place for antisemitism in our society. Ahead of Shavuot, I stand with Britain’s Jews who should not have to endure the type of shameful racism we have seen today.”

Mobs of rioters scaled buildings and climbed the gates of Kensington Palace, demanding “immediate action” by the UK government to end the “brutal violence against Palestinians,” according to MailOnline.

Thousands marched through the British capital to the gates of the Israeli Embassy in Hyde Park during the Sabbath, and pro-Palestinian Authority protests were reported elsewhere across the UK and Ireland. Nine British police officers were hurt and nine arrests were made in the clash between “protesters” and police outside the Israeli Embassy.

Former Labor leader Jeremy Corbyn was featured as a speaker in the “Speak up for Palestine” protest in Oxford described as “peaceful” in British news media.

“There must be an immediate police crackdown on those responsible for these acts of Jew-hatred, and an inquiry into why the Metropolitan Police Service permitted these protests to go ahead without proper measures in place to stop this criminality, in full knowledge that today’s scenes were likely to the point of certainty,” said Falter. 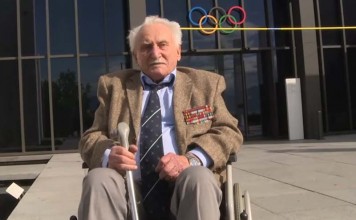