The official Syrian Arab News Agency (SANA) reported that Israel’s military fired a number of missiles at southern Quneitra province, towards the western Dara’a district overlooking the Golan Heights, where Tal al-Hara, a border town, is considered a strategic position.


According to the report, some of the missiles reached their target, causing damage but no casualties. “In its aggression, the Israeli enemy used a system of electronic jamming on the air defense radar,” SANA reported.

The Israel Defense Force has made no comment on the report.

According to an article published last year by the Hezbollah-linked Al-Manar news outlet, the targeted site is of “great strategic importance” because it is one of the highest hills in Dara’a, at a height of 1,075 meters.

The site is 12 kilometers away from Quneitra and 55 kilometers from Dara’a city. . . overlooking the southern and western regions of the Damascus countryside as well as the northern region of Dara’a and Quneitra. The hill is also about 12 kilometers away from the border strip in the area of Israeli side of the Golan Heights and “reveals the Jordanian city of Irbid, as well as an important Israeli air defense battalion,” according to Hezbollah. 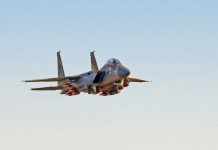