An IDF unit successfully intercepted and captured a terror cell on Tuesday night that attempted to cross the security barrier from the Hebron area toward the area of the city of Beer Sheva.

The IDF stated that during an ambush that took place on the “Seam Line” near the Meitar crossing in the south of the Hebron area, the unit identified a suspicious vehicle attempting to cross the security barrier.


The soldiers stopped the vehicle with four suspects inside who were in the possession of ammunition, IDF military uniforms, surveillance devices, and approximately NIS 80,000.

The arrested terrorists, the weapons, and the confiscated funds were handed over to the security forces for further investigation.

The IDF has in recent months bolstered its forces along the Seam Line surrounding the Judea and Samaria region and the security barrier, a high wall at some areas and a tall fence at others, following a series of deadly attacks carried out in Israeli cities by terrorists who infiltrated through the Seam Line.

In June, the IDF announced it has established a new headquarters that is focused on commanding the forces at the Seam Line and will be comprised of officials in the operational and intelligence fields like the other regional divisions operating in Judea and Samaria.

The new division has two battalions and 10 companies at its command. 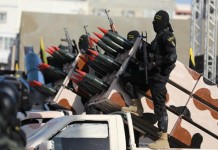