A Palestinian Authority terrorist armed with a knife was shot and killed on Tuesday after he attempted to stab IDF soldiers at a checkpoint in Hebron, according to local sources.

The attack took place at Beit Ha’Shalom, near the Cave of the Patriarchs.

“Following the report of an attempted stabbing attack in the city of Hebron, IDF soldiers identified a terrorist armed with a knife running towards them, the fighter fired at the terrorist who had run to a nearby civilian building armed with a knife,” the IDF Spokesperson told reporters in a statement.

According to eyewitnesses at the scene, the terrorist had entered the Beit HaShalom apartment building in which Jewish families are living. One of the residents saw the terrorist and notified Israeli security forces, who were summoned to the building.

The terrorist was shot and killed before he could harm anyone. No injuries were reported among the IDF soldiers.

A large knife was seen on the floor several feet away from the attacker in the entrance hall to the building (see photo). 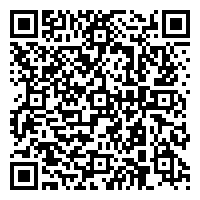