An Arab terrorist on Saturday night rammed his car into a group of soldiers operating near the Arab town of Hizmeh, north of Jerusalem, injuring five of them. The terrorist was captured several hours later.

The IDF soldiers were in the area during an operational mission when they were hit by a vehicle driven by an Arab. The terrorist fled the scene. Two of the wounded soldiers sustained moderate injuries while the rest sustained light injuries.

The victims were evacuated to hospitals in Jerusalem. Shaare Zedek hospital stated Sunday morning that one of the victims, who sustained injuries to his lower body, would undergo surgery later in the day.

A female soldier, in her early 20s, sustained moderate injuries and is still hospitalized.

Israeli forces launched a quick investigation into the attack and arrested the terrorist early Sunday morning. The terrorist’s father was arrested as well.

“An initial investigation of the incident revealed that it was a terrorist attack, during which the terrorist identified the soldiers who were at a roadside point during an operational mission and ran them over,” the IDF stated.

Hizmeh has been the site of previous attacks.

Earlier on Saturday night, an Arab terrorist attempted to run over a police officer who pulled over a vehicle for security check at the Tzofim roundabout in Samaria.

Troops responded at the scene by firing at the vehicle, which drove away. No injuries were reported in the incident. Police and IDF units launched a manhunt for the terrorist. 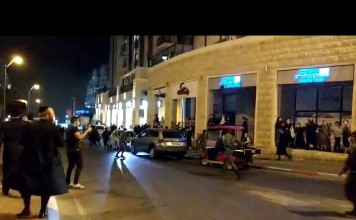