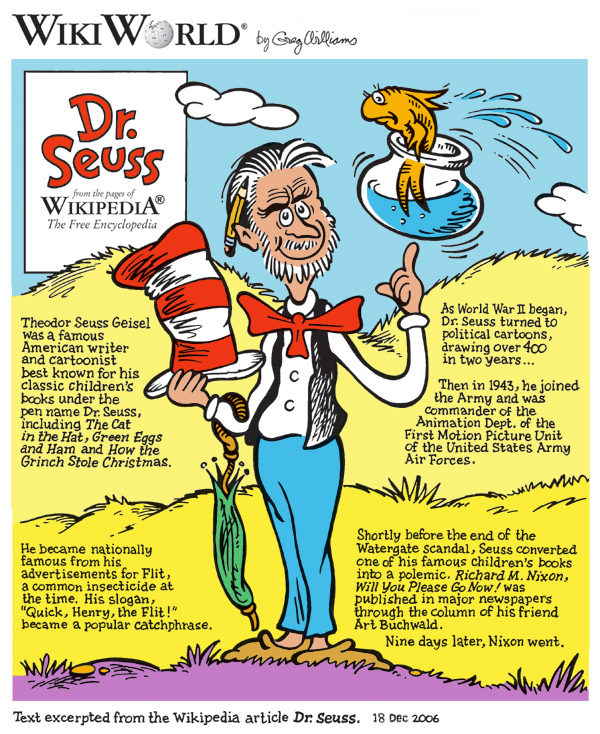 It’s not such a great birthday present, even if you’re dead. This Tuesday was the 117th birthday of Dr. Seuss, and it was also Read Across America Day. It should have been a happy day. However.

The company that protects and promotes the legacy of the late great Dr. Seuss, aka Theodor Seuss Geisel, has announced that six of his books will no longer be published because they “portray people in ways that are hurtful and wrong.”

“We are committed to action. To that end, Dr. Seuss Enterprises, working with a panel of experts, including educators, reviewed our catalog of titles and made the decision last year to cease publication and licensing of the following titles: And to Think That I Saw It on Mulberry Street, If I Ran the Zoo, McElligot’s Pool, On Beyond Zebra!, Scrambled Eggs Super!, and The Cat’s Quizzer. These books portray people in ways that are hurtful and wrong.

“Ceasing sales of these books is only part of our commitment and our broader plan to ensure Dr. Seuss Enterprises’s catalog represents and supports all communities and families.”

Cancel Dr. Seuss in Read Across America Day
Among the books to be banned was the very first children’s book written under the pen name of Dr. Seuss, “And to Think That I Saw It on Mulberry Street,” written in 1937.

Theodor Seuss Geisel’s stories have been translated into myriad languages and are known and loved as much for their positive values as they are for the engaging way in which they capture the hearts of children around the world.

However, the insidious mutterings of “woke” society keep rising as activists search for more targets once current victims become subdued.

Dr. Seuss has become a convenient target, having been particularly prominent each year on his birthday when his books took center stage for Read Across America.

Activists began to scrutinize his work, eventually determining that lo and behold, his children’s books were “racist” and “problematic” and contained “stereotyped characters.”

Read Across America, founded by the National Education Association in 1998 to celebrate reading, for many years might have been called simply Dr. Seuss Day. Even today, many teachers still use Dr. Seuss books to help small children begin to tread the path of the written word. But officially, things have changed.

This year, President Joe Biden took the lead in the woke effort to cancel Dr. Seuss.

Biden “erased” any mention of Dr. Seuss from the Read Across America Day events, said Fox News, and from his presidential proclamation as well, unlike former Presidents Barack Obama and Donald Trump, who both mentioned the children’s author.

In the final year of his presidency, Obama said in his 2016 proclamation: “Theodor Seuss Geisel—or Dr. Seuss—used his incredible talent to instill in his most impressionable readers universal values we all hold dear.

“Through a prolific collection of stories, he made children see that reading is fun, and in the process, he emphasized respect for all; pushed us to accept ourselves for who we are; challenged preconceived notions and encouraged trying new things; and by example, taught us that we are limited by nothing but the range of our aspirations and the vibrancy of our imaginations.

“And for older lovers of literature, he reminded us not to take ourselves too seriously, creating wacky and wild characters and envisioning creative and colorful places.”

Like Obama, President Trump said in his 2020 proclamation: “On this Read Across America Day, we recall the motivational words of Dr. Seuss — an American icon of literature — and impart his wisdom on our Nation’s young people: ‘You’re off to Great Places! Today is your day! Your mountain is waiting, so…get on your way!'”

That was then. This year, President Joe Biden erased Dr. Seuss.

“The key to developing young learners into engaged, active, and innovative thinkers is instilling in them a love of reading at an early age. Reading is the gateway to countless skills and possibilities—it sets children on the path to a lifetime of discovery,” Biden’s proclamation said.

“On this Read Across America Day, we celebrate the parents, educators, librarians, and other champions of reading who help launch our Nation’s children on that critical path.”

What could have prompted such a move? Surely Biden must have read these stories to his own children when they were small? Possibly even to his grandchildren?

Dr. Seuss, who died in 1991, is known for having revolutionizing the teaching of reading, but also for his skills as a cartoonist, according to book critic Ron Charles, writing in The Washington Post.

Charles also writes, however, “it’s long been known that early in his career Geisel drew propaganda cartoons that reflected anti-Black and anti-Japanese tropes. Some of those ugly motifs leached into his children’s books like toxic mold in the basement – easy but dangerous to ignore.”

Charles does not give specific examples of what the “ugly motifs” are, nor does he show any of the anti-Black or anti-Japanese tropes. He contends that his concerns are “not new or – despite mockery from the right – part of some trendy cancel-culture hysteria” and commends Dr. Seuss Enterprises for having taken action.

“In ‘And To Think That I Saw It On Mulberry Street’, for example, a character described as Chinese has two lines for eyes, carries chopsticks and a bowl of rice, and wears traditional Japanese-style shoes. In If I Ran the Zoo, two men said to be from Africa are shown shirtless, shoeless and wearing grass skirts as they carry an exotic animal,” they say, pointing to these books as examples of stereotypical portrayals of people of color.

At least the folks at NPR can clarify what they are upset about.

Furthermore, Seuss “wrote an entire minstrel show in college and performed as the main character in full blackface.”

Horrors. The fact that all this took place more than 70 years ago — decades before blackface was ever linked to the word “racism” and way before cartoons to depict Asians or people of color were ever considered offensive — seems somehow to have escaped the “woke” world.

Research ‘Shows Racism Across Seuss Collection’
So in light of all this, the National Education Association decided in 2017 to back away from Seuss’ books and Seuss themed activities for Read Across America, NPR reported. Instead a new theme was introduced, to “celebrating a nation of diverse readers,” with its website highlighting works by and about people of color.”

In their February 2019 report, the two researchers write, “This study reveals how racism spans across the entire Seuss collection, while debunking myths about how books like Horton Hears a Who! And The Sneetches can be used to promote tolerance, anti-bias or anti-racism.

“Findings from this study promote awareness of the racism narratives and images in Dr. Seuss’ children’s books and implications to the formation and reinforcement of racial biases in children.

“Notably, every character of color is male. Males of color are only presented in subservient, exotified, or dehumanized roles,” the authors write as part of their findings. “This also remains true in their relation to White characters. Most startling is the complete invisibility and absence of women and girls of color across Seuss’ entire children’s book collection.”

The researchers are, however, attempting to accomplish the same task that occupied the Black Lives Matter “protesters” who became so busy pulling down historical statues all across the United States last summer, whether they realize it or not. They are doing their best to rewrite cultural and actual history as quickly and thoroughly as possible, and to erase whatever does not suit their values, needs or objectives.

It’s dangerous and scary. Wake up, America. The woke folks are marching.