Only a handful of people – including several members of Neturei Karta – showed up for the actual protest, which was organized by Linda Sarsour, co-chair of the 2019 Women’s March and the daughter of Palestinian-Arab immigrants.


The protest was called after Yeger tweeted, “There is no Palestine” on Wednesday. Numerous New York City officials condemned the tweet, including Mayor Bill de Blasio, Public Advocate Jumaane Williams (“To discount & dismiss an entire group of ppl is completely destructive”), and Comptroller Scott Stringer (“I condemn this irresponsible and divisive rhetoric unequivocally.”)

One of the few people who showed up to the protest told The Jewish Press, “I came to the protest because when somebody makes a statement that says that they want people to die, then it’s my obligation to stand up against that, particularly when that person is an elected representative in New York City.”

Asked to elaborate, she said, “What if I said, ‘You don’t exist’ – what does that mean?” She said it’s “not true” that Palestine doesn’t exist. “It does exist. It exists on many levels. It exists as a government, it exist as a people, it exists as a region, and it exists as a movement,” she said. She declined to give her name.

Dov Hikind, a former New York Assemblyman who organized the counter-protest, told The Jewish Press, “I just got back from Israel this morning, and as soon as I heard what was going on, I said, ‘My G-d, Linda Sarsour is telling people to come to Boro Park to protest? This anti-Semite who supports terrorism?'”

Hikind said it warmed his heart that the counter-protesters outnumbered the protesters by a factor of about 10 to 1. “We did this in literally an hour or two just reaching out to people.”

Councilman Yeger was not in his office at the time of the protest at the request of the police, but he told The Jewish Press that he was “very grateful” for the community’s support.

He also said he won’t apologize for his tweet as he did nothing wrong. “I never referred to Palestinian people. My reference was to a geographic reality – an international, legal reality. There is no entity by that name [Palestine]. That’s a fact.”

In reaction to claims that his tweet was not “helpful to the conversation,” Yeger said, “This is Twitter. I’m not having a university debate. Somebody tweeted at me. I replied. That’s the way Twitter works.” 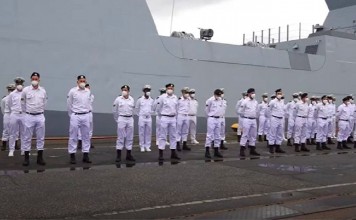