Last week, my son Adi bravely reported for his first day of Gan Chova (the Israeli equivalent of kindergarten). After two months of “Mommy school,” my son was eager to get back to the classroom.

I, on the other hand, was nervous. Would he make friends easily? Would he be able to follow along in a class taught in Hebrew? On top of that, I had concerns for his health. Was it too soon to be returning to school?


While I was torn on the last question, I didn’t have much of a choice. Unless, please G-d, we discover a vaccine, I can’t be sure attending school will ever be safe.

The school had been thoroughly cleaned, and a strict safety protocol had been instituted. Rather than the usual 27 students in the class (yes, classes in Israel are very big!), the class would be split into two, with each half going to school for three days a week.

The half-class would be split further into red and blue groups, each of which was restricted to using the bathrooms, tables, and toys marked with a sticker of their group’s color. With these measures in place, kids would be able to attend school while maintaining safe distances from one another.

An unexpected advantage of this protocol was that my son was able to start school in a less overwhelming setting than usual. In anticipation of the first day of school, I reached out to the class’s WhatsApp group and asked whether there were any English-speaking children in my son’s group that we could speak with before school began.

We immediately had several eager responses. Our first playdate was with a boy from his class. Though his parents were Israeli, they had lived in New York for a couple of years. The boys quickly bonded while kicking a soccer ball and enjoying the freedom of being outside, all while maintaining a safe distance from each other. 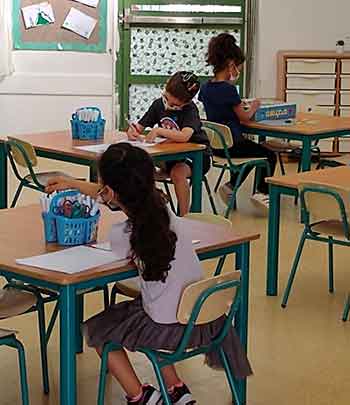 Our second playdate was virtual and was with an Israeli-born daughter of American olim. The girl was so friendly that my son found himself happily chatting about what to expect in class and their common appreciation for sequin flip shirts. While it is always hard to make new friends (let alone with a language gap), I was optimistic that with kids as welcoming as these, my son would quickly settle in.

All too soon for me, my son’s assigned school day arrived. I packed his backpack with an aruchat eser (the 10:00 brunch meal that consists of a sandwich and a fruit) and cold water. I filled out the necessary paperwork and helped him put on his mask. With nothing left to do, we left the house, ready to face this new challenge.

We were greeted at the gan by my son’s masked, but smiling gannenot (teachers). One teacher whisked him inside and showed him the stations with the blue stickers where he would be allowed to play while the other teacher gave me instructions regarding pickup.

As I turned to say goodbye, I saw my son already busy at work, coloring at one of the tables. I smiled and took a quick picture, glad to capture this moment of a normal childhood experience in the midst of the world’s craziness.

I spent the rest of the day wondering how he was doing. When I arrived for pickup, I was relieved to see his smiling face. He reported that he had enjoyed school, even if he didn’t understand everything. His only complaint was that the playground was in a giant sandbox and that he didn’t want to get sand in his sneakers.

Grateful that this was the only problem, I assured him we would solve it right away. The next day, clad in brand new sandals, he happily joined the messy sandbox games along with his new friends.

On Sunday, we reported for our second week – this time with all 27 kids in the class. Despite this increase, I felt oddly calm. My son was settling in. He was meeting new kids and eagerly learning from his new teachers. Times may be uncertain and integration a slow process, but my six-year-old was boldly leading the way for us all.

Of course, all sense of calm quickly dissipated Sunday night when I received a WhatsApp message from the school warning us that the “third maka” had been reported in the class. It took a moment for me to register what the message meant – lice!

Admittedly, I freaked out a bit. But as I checked my son’s hair with a flashlight and comb, I realized that, just like coloring and playing in sandboxes, this too was part of the normal gan experience.

I can only hope that the next part of the experience doesn’t involve administering lice treatments.