Rav Breuer was born in 1882, in Papa, Hungary. His father was Rav Shlomo Breuer, a talmid of the Ksav Sofer, who married Tzipora (Sophie), a daughter of Rav Samson Raphael Hirsch, the rav in Frankfurt am Main. The young Joseph once traveled to Frankfurt to meet his grandfather, who told him to look at him and remember him well. Rav Breuer – who became the leading proponent of Rav Hirsch’s derech in the United States – heeded this directive his whole life.


After Rav Hirsch’s petirah in 1888, Rav Shlomo Breuer was named his successor and, in 1890, moved to Frankfurt with his family. There he established the Frankfurt Yeshiva for intensive, post high-school limud haTorah, in which Joseph Breuer became a star talmid.

In 1903, Rav Breuer received semicha from his father and from Rav Koppel Reich, the rav in Budapest. Rav Breuer also attended the University of Strasbourg, from which he received a doctorate in philosophy.

Rav Breuer became a faculty member in the Hirsch Realschule in Frankfurt, where he taught many subjects to upper-level classes, including Gemara, Mishnayos, history, and German literature. His many students fondly remembered his classes in Yeshayah, Yirmiyah, and Yechezkel. Well into his 90s, he gave a weekly shiur in navi in the kehilla. Participants in these shiurim testify that they could hear the navi speaking when Rav Breuer presented the text in its historical setting. 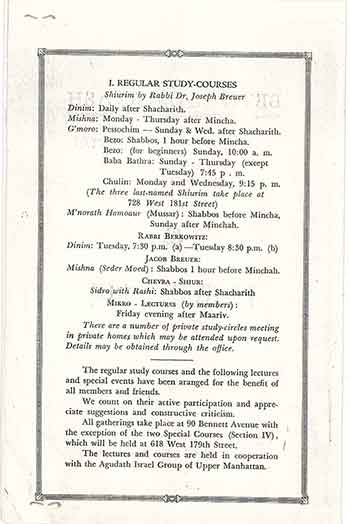 These sefarim, written in German, are now available in English thanks to the heroic efforts of Rav Breuer’s children and, especially, his grandson, Dr. Elliott Bondi, who is the senior editor for the Rabbi Dr. Joseph Breuer Foundation.

(Over the last four decades, the Foundation has also published translations of dozens of works by Rav Hirsch and his descendants in accordance with the wish Rav Breuer expressed on the day before he passed away.)

In 1906, Rav Breuer began teaching in the Frankfurt Yeshiva as well, and in 1911, he married Rika Eisenmann from Antwerp. Her father, Jacob, had been a talmid of Rav Hirsch and was a successful businessman and communal leader.

In 1919, in addition to his teaching duties, Rav Breuer became rav of the Klaus, a small shul that consisted primarily of baalei batim who spent much of their time learning. In the early 1920s, Rav Breuer became more involved in the Frankfurt Yeshiva and, when his father passed away in 1926, assumed the position of rosh yeshiva.

Accounts from talmidim of that time abound with admiration for his derech halimud, which was the Hungarian yeshiva style of an unending search for the truth in peshat and an emphasis on understanding the hava amina and maskana of each sugya. His fatherly manner of receiving, and maintaining a connection with, the many students who came from across Europe left a lifelong impression on them.

Upon the rise of the Nazis, Rav Breuer sought to save his yeshiva and in 1933 relocated for a few months to Fiume, Italy, with an eye to eventually moving to Eretz Yisrael. The financial backing for this venture, however, was inadequate and he moved back to Frankfurt where he witnessed the destruction of the institutions in which he was raised and thrived.

Jacob Samuel, a talmid of his who was living in New York, traveled to Antwerp (where Rav Breuer had been residing for a brief period) and convinced him to come to America. Rav Breuer, his wife, and three of his children arrived in New York in February 1939. They were housed in an apartment on the Upper East Side, but within a few days he was asked by a small group of German-Jewish immigrants to serve as their rav in Washington Heights.

Thus began the building of the kehilla, which eventually grew to include a large beis haknesses building, a mikveh, a kindergarten-through-beis medrash educational system, a kashrus organization, a chevra kadisha, and all other facilities needed for kehilla life.

I would like to call attention to the learning program of the kehilla during its early years. This was when its organizations were fledgling, when immigrants were still struggling to make a living, when many families were mourning the loss of loved ones in the Holocaust or waiting anxiously to hear from them, and when young kehilla men were in the U.S. Army overseas. Rav Breuer labored in those years to procure funds for a mikveh, establish reliable kashrus supervision, rebuild the yeshiva that existed in Frankfurt, and eventually build a permanent beis haknesses – all while caring for the individual needs of his growing membership. Considering all this, the scope and breadth of shiurim that Rav Breuer gave on a weekly basis is breathtaking.

Reproduced above is the “Beth Hamidrash” program of the kehilla from the winter of 1945-1946. In addition to a daily short halacha after Shacharis, Mishnayos between Mincha and Maariv, and Mussar twice weekly, Rav Breuer’s weekly schedule of shiurim included two in Maseches Pesachim, two in Maseches Beitzah, four in Maseches Bava Basra, and two in Maseches Chullin.

In other words, he was giving 10 Gemara shiurim a week – two of which only started at 9:15 p.m.! Who knows when he had time to prepare for these shiurim? In later years, I recall the family retiring for the night with my grandfather still bent over his large Shas volumes, a position he would maintain until the wee hours. It was supremely important for Rav Breuer that his baale batim remained always “in learning.”

Rav Breuer’s wife passed away in 1953, and shortly thereafter he moved in with his son-in-law and youngest daughter, Jerry and Meta Bechhofer – my parents. I was born a year after the Rebbetzin’s petirah.

After establishing and leading the kehilla for almost two decades, Rav Breuer invited Rav Shimon Schwab to join him in the kehilla rabbinate, which he did in 1958. As Rav Breuer reached old age, Rav Schwab took over most of the Rav’s duties. Rav Breuer’s last Shabbos morning drasha in shul was at my bar mitzvah, in 1967.

However, the Board of Education meetings of the yeshiva continued to be held in his study, as did meetings with rabbanim and roshei yeshiva, members of the kashrus committee, the shochtim, kehilla members who had halachic questions or needed advice, and every bar mitzvah boy and chassan and kallah.

When we were older and my mother, who served as the Rav’s secretary in addition to running a busy household, was occasionally out of the house, we were called on to usher in and announce visitors. I remember always being terrified that one of the visiting rabbanim would ask me what I was learning!

In 1974, when Rav Breuer was 92 years old, he lost most of his eyesight and the ability to read. As learning was his lifelong passion, it was a terrible blow. But he always relayed to visitors his novel explanation of the words in Pirkei Avos, “Eizehu ashir, ha’sameach be’chelko”: A rich person is someone who is happy with the portion (chelek) that is left him. Rav Breuer could no longer read, but his mind was clear.

A rotation of baale batim and family members was established to learn with Rav Breuer at different times of the day. When the schedule was not filled, he would listen to recordings of Mishnayos and Gemara on a cassette recorder.

I learned with him several times a week, in between attending Breuer’s yeshiva during the day and City College at night. From these sessions, I began to appreciate his clear approach to peshat and marveled at his recall of rishonim, especially in sugyos that had to do with issur ve’heter (e.g., the last perek in Maseches Avodah Zara).

I also was privileged to learn with him after davening on Shabbos morning, when we reviewed the haftara and I benefited from the Navi shiurium he had given 70 years earlier in Frankfurt.

In the summer of 1978, I was between undergraduate and graduate school, and so had the summer off. I spent July and August in Tannersville, where my parents have a summer home and where my grandfather spent many happy summers. We were learning Maseches Yoma at the time, and the daily learning schedule included sedarim from 11 a.m. to 1 p.m., and from 5 p.m. to 7 p.m.

This was a wonderful time, learning with the master for hours a day! (I also had the zechus that summer of learning with Rav Hershel Schachter from 3 p.m. to 5 p.m.. Yes, there was tennis here and there, as well.)

When my mother would come in at 1 p.m. to announce it was time for lunch, or at 7 p.m. to remind him that it was time for dinner, my grandfather would say, “Right away, right away,” and we would go on learning. This from a man who was 96 years old! His ahavas haTorah was boundless.

The Monday night before Rav Breuer’s petirah, on a Shabbos morning, he was still presiding – at age 98 – over the Monday-Wednesday night shiur (see schedule above), which he had been giving for 40 years. The shiur had a unique format, in which the baale batim, some of whom were accomplished talmidei chachamim, would take turns “saying” the Gemara, Rashi, Tosafos.

In the week of the shiva, Mr. Elias Slomovits (a longstanding shiur member) asked me to take over the shiur. Baruch Hashem, it still continues 40 years later, and is certainly one of the longest-running blatt shiurim in the world. The shiur still takes place in Rav Breuer’s study, thanks to my mother, Meta Bechhofer, who maintains the apartment.

May the memory of this leader in Klal Yisrael, who spent eight decades toiling in the spread of Torah, inspire us in these troubled times. Ze’chuso yagein a’leinu. 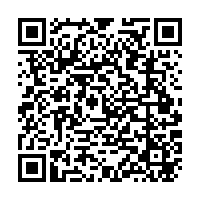