That’s not the same expression he has in My Father in the SubwayI, where Ferguson’s father is visible standing on the 28th Street subway platform through the train window. The viewer (and by association, the artist) presumably stands inside the No. 1 train. Ferguson’s father—dressed in a gray suit and carrying a black portfolio—looks tired, almost like Dustin Hoffman’s Willy Loman. As in some of Hopper’s works, the dynamic nature of the graffiti and other signage on the train directs the viewer’s attention away from the artist’s father, who is literally sliced horizontally by three of the subway window’s crossbars.

In My Father at Mount Sinai, Ferguson’s dad lies on a hospital bed, with a cannula (tube) under his nose. The curtain in the foreground is a tallit, which suggests that the arm bands on the figure’s right arm might be phylacteries. Despite the bands and tube, Ferguson’s father wears a watch (perhaps suggesting the passage of time to the artist, who is a fan of 17th Century Dutch art, and thus, by extension, momento mori), and appears to be mid-speech. His gaze is directed right at the viewer, who is both his son and those who view his son’s painting.


“‘Honor your father.’ It stares back in black and white from Exodus, and for good measure in Deuteronomy as well,” Ferguson writes in an artist’s statement about the series on his father. “I guess this is my way of honoring him.”

Menachem Wecker, who blogs on faith and art for the Houston Chronicle at http://blog.chron.com/iconia, welcomes comments at mwecker@gmail.com. 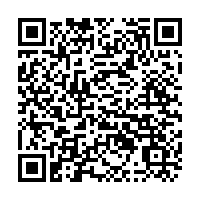