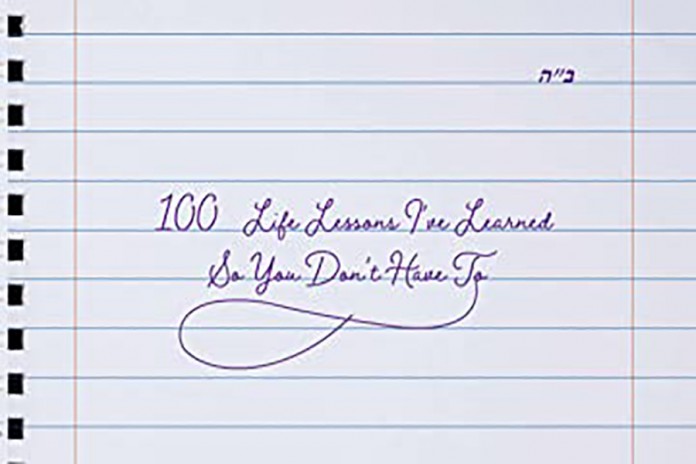 Title: 100 Life Lessons I’ve Learned So You Don’t Have To
By Rosally Saltsman, 399 pages


Rosally Saltsman is a keen observer of life and one of the most skilled and prolific Jewish writers out there. She has written and co-authored dozens of books and many articles that offer her idiosyncratic perspective on a range of subjects, including such widely divergent areas as finding a soulmate, performing acts of chesed, parenting and shemirat halashon – refraining from gossiping.

Saltsman’s latest work, 100 Life Lessons I’ve Learned So You Don’t Have To, is chock full of fascinating musings and thought-provoking observations about life in general, and life in Israel in particular. Most are based upon her own experiences and the valuable life lessons she harvested from them.

Saltsman is a deeply spiritual person and a perennial optimist. She gains insight – and often finds humor – in the most mundane experiences. There are no coincidences; there is meaning in everything that occurs:

Her son accompanies her to a charity bazaar, where he finds a set of ping pong rackets priced at two shekels, or 60 cents, for the pair. Overriding her protests that he doesn’t need them since he has a perfectly good set of rackets at home, he buys the pair, excited about his bargain. Upon their return home she searches for his ping pong rackets – and realizes that she had donated them to the charity bazaar . . .

Every chapter begins with a quotation uttered by a wide variety of personages, from Robert Louis Stevenson to Rabbi Yitzchak Hutner, from Ayn Rand to Rabbi Shlomo Carlebach, and from George Bernard Shaw to the Lubavitcher Rebbe.

Rosally Saltsman tells us: Be happy. She provides a Ten Commandments – she calls them ingredients – to get there:

Commune with G-d.
Commune with nature.
Give or receive love.
Help others.
Stimulate your mind.
Exercise – or pamper – your body.
Do something worthwhile.
Do something creative.
Be inspired.
Motivate others.
Now, that’s a pretty good formula for attaining happiness.

Get 100 Life Lessons. But be cautioned. This is not a work to be read in a single sitting, or even three or four. It should be opened at random and the selections savored, as if from a box of choice chocolates, a delicious few at a time.