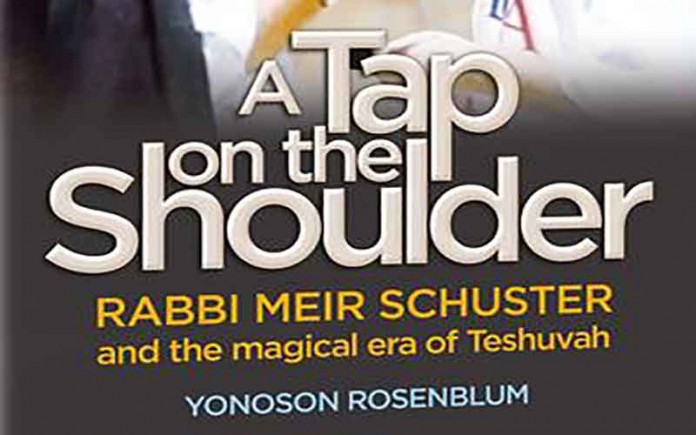 Title: A Tap on the Shoulder: Rabbi Meir Schuster and a magical era of Teshuvah
By Yonoson Rosenblum
Published by Artscroll/Mesorah, 368 pages

Although there are many famous people who were involved with kiruv on the grandest scale, one of the most famous is Rabbi Meir Schuster. The tens of thousands of people whom he brought back to Yiddishkeit, and the hundreds of thousands of their descendants and friends who were indirectly influenced by him, is the stuff of legend: the legend of The Man at the Wall.

Meir Schuster was a neshama collector, and he added every day to his collection by bringing these neshamot (he never saw the exterior of the person, just the neshama) closer to Hashem. A man with no outward charisma, introverted and shy, with no gift of gab, he made his life’s work gathering souls and elevating them. He could be found mostly at the Kotel, but sometimes at the bus station, or the university or wherever the backpacking and soul-searching youth were to be found in the 1970s, 80s and 90s. Sometimes his “clients” saw him on television or in the newspapers, thousands of miles away beckoning them to return. And beckon them he did. Although it was more of a tap on the shoulder. They felt his sincerity and followed him, the Pied Piper of the Kotel.

Day and night, Reb Schuster was at the Kotel, there at the right time to answer a young person’s heartfelt prayer for guidance. Whether it was offering to have them “talk to a wise man,” having a Shabbos meal or attending a class, the encounters would often turn out to be life-changing. Many of these men and women later joined Rabbi Schuster’s kiruv network either by hosting guests for Shabbos, becoming mentors at the yeshivas, working at Heritage House or starting their own kiruv franchise.

How did it begin? Chaim Kass, a friend of Schuster’s, told him a story about the Netziv, which encouraged him to literally go soul searching at the Kotel. And for the next four decades, Meir Schuster was The Man at the Wall. He picked up young people and brought them to Aish HaTorah, Ohr Sameyach, Neve Yerushalayim and Heritage House as well as to the homes of people who were allied with him in his mission and loyal to him for decades.

It would be impossible to calculate how many neshamot were drawn back to Jewish observance through his tap on the shoulder. Many of Rabbi Schuster’s targets have gone on to do kiruv in their own right, becoming rabbis, teachers, authors and heads of large-scale kiruv organizations. Some of these include Kalman Pakousz, Lori Palatnik and Gila Manolson. The world today would not be enjoying the spiritually unique and holy art of Yoram Raanan if Rabbi Schuster had not brought him to Ohr Sameyach and set him up with a Gemara study partner as well as a studio. And that goes for many artists, musicians and authors who joined their art to holiness after meeting Rabbi Schuster. He knew what each person needed on their spiritual journey and he made sure they got it. Whatever it took.

Siyata D’Shemaya (divine assistance) was a big factor in his success. That, his unrelenting sincerity, and the fact that Rabbi Schuster was unrelenting.

Yonoson Rosenblum has a track record of recounting the lives of great men and women in a way that inspires his audience, thereby spreading their influence exponentially. He has not disappointed in this newest tribute that shows us how each of us can make a difference independent of what we perceive as our limitations.

Esther Schuster, Meir Schuster’s wife, was an ezer knegdo and eshet chayil in every sense of the word. Many of the people whom Rabbi Schuster picked up at the Kotel had dinner with him and his family. Esther Schuster’s chicken soup was apparently unparalleled in the kiruv world, as was her warmth, positive nature, and willingness to keep the home fires burning when her husband worked 24/7, even on Yom Kippur, to be available for anyone’s spiritual quest, or when he went fundraising abroad to keep his kiruv projects afloat. (Her picture was not included in the book at her request for reasons of modesty and the self-effacing humility that she and her husband shared.)

A Tap on the Shoulder speaks at length about Heritage House, one of the many projects in Rabbi Schuster’s kiruv empire. Many of today’s famous kiruv personalities had their beginnings at Heritage House and the book reads as a Who’s Who in kiruv and the Torah world. A Tap on the Shoulder cannot encapsulate the tens of thousands of stories of Rabbi Meir Schuster’s impact, but it does feature a taste of its essence. And that’s all we can hope for.

In 2014 Rabbi Schuster returned his soul to Heaven after seven years of illness following 40 years of working for the klal. He was buried on Har HaZeitim overlooking the Temple Mount, the Old City of Jerusalem and his beloved “office.”

Though no book can properly do Rabbi Schuster’s story justice, Jonathan Rosenblum’s comes as close as any can. And we can be sure that in Heaven, Rabbi Schuster is smiling his “radiant smile,” nodding his head and enjoying the presence of all the neshamot that because of him are basking in the light of the Shechina. 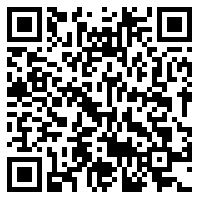