Viewers who read Daniel Weinstein’s list of artistic influences on his website will get the impression they are dealing with an unusual sort of Judaica, even before they see the art. The “menagerie of sights and sounds” in Weinstein’s work draws upon the sacred and the secular: Hallel, Tehillim (Psalms), Kohelet (Ecclesiastes), the Israeli city Tsfat (Safed), South Beach, Rabbi Shlomo Carlebach, the Breslov singer Yosef Karduner, Rastafarian reggae musician Bob Marley, American rock band Alice in Chains, Chassidut, Dr. Seuss, Israel-based Lubavitcher painter Baruch Nachshon, the 1998 comedy “The Big Lebowski,” and Weinstein’s wife Leah Malka and son Aron.

On his site, Weinstein explains his seemingly incongruous inspirations with a quote from Psalm 100: “Serve Hashem with gladness, come before him with joyous song.” In an interview, he elaborated. “The concept of living daily life from a Torah perspective means that you don’t need to separate from society,” Weinstein wrote in an e-mail. “On the contrary, we need to bring a piece of G-d down here to our everyday lives. We are all influenced by many different things. The key is to channel it all into a worthwhile direction.”

To make this channeling work, Weinstein added, artists must not be afraid of separating art and life, even Torah-based life. “If I wake up one morning and decide Metallica’s ‘For Whom the Bell Tolls’ would make a great soundtrack for a five-minute animation of Matan Torah, I’m going to roll with that idea and not worry about whether it is appropriate or not,” he said, “because in the end, those five minutes of guitars, flames, and lightning bolts will find its audience and open somebody’s mind to the intensity and awesomeness of that moment.”

Seventh Hakafa.
Image by and courtesy of Daniel Weinstein

By now it should be clear that Weinstein’s Jewish art is quite a different blend from Chagall’s or Moritz Oppenheim’s works. For one thing, Weinstein’s works are not paintings in the strict sense of the word. They are Gicleé prints (“spray” in French and pronounced Zhee-Clay), which use ink-jet printers, pixels, and archival ink instead of canvas, gesso, and turpentine.
They also use a very different palette from historical Jewish art. Take “Psychedelic Simchat Torah,” which shows 16 Chassidic men − each wearing a shtreimel (fur hat), prayer shawl, and sunglasses and carrying a Torah − flying through the air over a couple dozen skyscrapers colored in “highlighter” shades of purple, orange, yellow, red, pink, and blue.

Psychedelic Simchat Torah.
Image by and courtesy of Daniel Weinstein

Weinstein points to British writer Aldous Huxley, author of the Utopian novel and psychedelic drugs-influenced Brave New World and The Doors of Perception, to respond to the charge that his works are contradictory. “The Torah has so many twists and turns and can be understood on myriad levels,” he said. “Each door you open opens another door.”

Weinstein’s art then, is about “stripping away” layers of the mundane and getting to the truth, which exists in a different reality. “I strive to use Judaism as a vehicle to find an altered and more beautiful state of reality and translate that onto canvas,” he said. In the case of “Psychedelic Simchat Torah,” Weinstein’s flying men draw upon a saying of a wise Rebbe: “A true Chassid must have his head in the clouds, but keep his feet on the ground.”

Yirmiah 5:22.
Image by and courtesy of Daniel Weinstein

“Yirmiah 5:22” draws upon the biblical text, which tells of one of the many times Jeremiah is tasked by G-d to bear bad news to the Jews, though he is assured that they will ignore his accusations and predictions of the Temple’s imminent destruction. In chapter five, G-d sends the prophet to the house of Jacob and Judah to reproach the “nation of fools,” which has no heart and is blind and deaf despite its seemingly functional eyes and ears. “‘Do you not fear me?’ so says the Lord,” quotes Jeremiah in verse 22. “‘Will you not shake in front of my face; I placed the sand as a border to the sea, an eternal order which it cannot pass, and the waves throw themselves without lasting, and they cannot cross it.'”

Scavenging the text for visual elements to appropriate, a classical artist might show the prophet with a white beard, dressed in a biblical tunic, screaming at a chaotic mass of irreverent bystanders who turn their backs on him, mock him, and maybe even throw things at him. Perhaps a few believers in the crowd cover their faces in fear, or fall to the ground weeping.

But Daniel Weinstein’s “Yirmiah 5:22” shows a very different scene, which does not even include Jeremiah. In the print, three bearded Chassidim, wearing big white kippot over their flowing side curls, run not to synagogue but along the beach. They wear sunglasses and carry surfboards decorated with logos that evoke “Hot Wheels”.

Weinstein often includes poems or other texts alongside his works, and the text accompanying Yirmiah derives from the final scene of the 1991 movie Point Break (about surfers and bank robbers), in which the character Bodhi says, “Time to dance with the universe.” Over e-mail, he added, “The scene here is depicting how at times we live on the edge, almost challenging G-d. We were just assured another flood will never come. So here we are, ready to catch the next wave with no worries.”

Waiting for the Sun.
Image by and courtesy of Daniel Weinstein

In “Waiting for the Sun,” the Chassidim (this time donning tallitot and tefillin) wait for the sun to rise to begin the Morning Prayer. The figure in the foreground plays an electric guitar, whose headstock seems to lift up the rising sun. “Wake up the dawn! Fury is the night. Glory is the morn,” explains Weinstein’s poem. “Instead of snoring can you hum me a bar? Three… two… one nicotine caffeine MODEH ANI.” On a metaphorical level, the work also illustrates Psalm 97, in which the “upright in heart” await the Holy Light, which is “sown for the righteous.”

Daniel Weinstein’s prints are certainly an acquired taste, and some viewers will no doubt examine them quickly and decide that they are too mesmerizing and hypnotizing, too colorful and too funky. But the form and the content come together in “Seventh Hakafa,” wherein hundreds of Chassidim (who appear somewhat abstracted and inhuman) dance around in circles in a spiral that descends to the center of the painting. “‘On Simchat Torah,’ goes the Chassidic saying, ‘we rejoice in the Torah, and the Torah rejoices in us; the Torah, too, wants to dance, so we become the Torah’s dancing feet,'” writes Weinstein in the accompanying poem. “The choreographic style of traditional Hakafot − Revolutions − reminds us there is no beginning and no end.”

Indeed there is an eternal and dizzying aspect to the Jewish tradition and its holidays. Perhaps classical paintings, with their muted colors and naturalistic treatment, cannot arrive at the sort of Jewish experience Weinstein captures. If Hakafot are supposed to be passionate circular dances, why shouldn’t they be depicted as psychedelic?

MENACHEM WECKER welcomes comments at mwecker@gmail.com. He is a painter and writer, residing in Washington, DC. 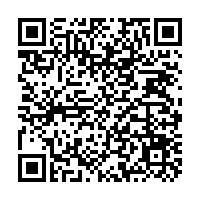