In a reverse decision, Facebook unblocked the account of a conservative children’s book publisher on Monday following news reports about the controversy. Heroes of Liberty, which has published biographies on Amy Comey Barrett, Ronald Reagan and Thomas Sowell, was suspended on December 23 by Facebook from advertising and editing its page due to what Facebook called “low quality or disruptive content.”

Facebook did not cite specific content that led to what it called a permanent suspension on advertising. According to Heroes of Liberty editor and board member Bethany Mandel, an Orthodox Jew, left-leaning users were likely triggered to complain to Facebook by ads portraying conservative icons as heroes with the slogan: “American Values – One Story at a Time.” 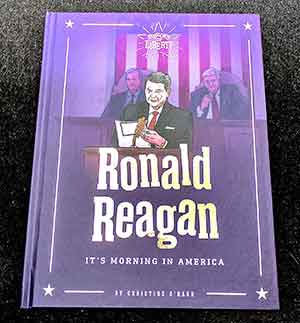 Another possible cause might have been a quote by African-American conservative Sowell in a promotional post on the Heroes of Liberty page: “Our children and grandchildren may yet curse the day we began hyping race and ethnicity. There are countries where that has led to slaughters in the streets but you cannot name a country where it has led to greater harmony.”

The ads sparked some negative online comments from users with opposing political views, such as: “Haha, brainwash [them] from day one;” and “I am conflicted. My respect for the 1st amendment says that they should be allowed to post this twaddle – but my sense of decency is telling me to buy these books just to burn them.”

Mandel said that by suspending the account, Facebook seems to have initially agreed with the inaccurate assertion that the advertising content violated its rules. She publicly shared Facebook’s message that claimed Heroes of Liberty’s advertising account violated the policy against “Low Quality or Disruptive Content.” Facebook’s advertising policy states, in part: “Ads must not contain content leading to external landing pages that provide an unexpected or disruptive experience. This includes misleading ad positioning, such as overly sensationalized headlines or prompts for users to inauthentically interact with the ad, and leading people to landing pages that contain minimal original content and a majority of unrelated or low quality ad content.”

While Heroes of Liberty was blocked, children’s books that promote liberalism, such as Penguin’s The ABCs of AOC and Little, Brown’s Feminist Baby, were promoted on Facebook without causing any apparent account suspension.

From November 23 until December 23, the book publisher ran 68 ads, with 95.2% of advertising money going toward ads which ranked “average” to “above average” by Facebook’s very own quality score. According to Heroes of Liberty, only three ads fell below the “average” threshold.

“Woke publishers control the market for children’s books. They sell low-quality books with the mission to indoctrinate our kids into being drones. [Heroes of Liberty] is the antidote: We share with your family beautiful stories with inspiring subjects to teach your kids the values we all hold dear,” the company said in a press release announcing its launch this past November.