Distinguished historian, literary critic, political thinker, and social philosopher Simon Dubnow (1860-1941) is best known for his syntheses of Jewish history, including such masterworks as History of the Jews, History of the Jews of Eastern Europe, and History of Chasidism. He was also, however, an important political and ideological pioneer who served as the premier expositor of secular ethical nationalism in the Diaspora.

Among the first to appreciate the importance of collecting and preserving Jewish historical documents, Dubnow personally amassed correspondence, manuscripts, rare books and community ledgers, birth and marriage records, and other archival gold that continue to play a key role in helping us understand the history of Eastern Europe.

Dubnow was the grandson of a respected rabbinic scholar and disciple of the Vilna Gaon. He was raised in an Orthodox family and received a traditional cheder education. Shortly after his bar mitzvah, however, he entered a state Jewish school and later commenced his own independent studies of history, philosophy, and linguistics.

His exposure to the Haskalah (Jewish Enlightenment) inspired a rebellion against religion and transformed him into a devout secularist. He refused to have a religious wedding, wouldn’t attend synagogue on Yom Kippur, and barely managed to force himself to recite Kaddish at his father’s funeral.

Nonetheless, he believed that Jewish national development is predicated upon an “all-pervasive religious tradition” and was committed to Jewish communal existence and the creation of institutions to preserve Jewish survival.

“I am agnostic in religion and in philosophy,” he once wrote. “I myself have lost faith in personal immortality, yet history teaches me that there is a collective immortality and that the Jewish people can be considered as relatively eternal for its history coincides with the full span of world history.”

For Dubnow, Judaism is nothing more – or less – than common historical memory. The study and teaching of Jewish history established his own Jewish identity and constituted for him the ultimate proxy for Judaism itself.

However, in the wake of pogroms and anti-Semitic legislation, he found it increasingly difficult to maintain his commitment to universalist secular values. He turned instead to working for the benefit of the Jewish people, calling for innovation in Jewish education; organizing Jewish self-defense programs against pogroms; and fighting for equal rights for Russian Jews, including the right to vote.

Dubnow did not believe Zionism – which he called “an opiate for the spiritually feeble” – was the answer to the Jewish people’s problems. More a non-Zionist than an anti-Zionist, he said establishing a Jewish state in Eretz Yisrael was a “beautiful messianic dream” that was politically, socially, and economically impossible. As an alternative, he developed “Autonomism,” an ideology promoting Jewish self-rule and welfare in the Diaspora: national-cultural autonomy. The Jews would live in their own area within which they would manage their own cultural and religious affairs and speak their own language, Yiddish.

After the 1917 Russian Revolution – which he initially supported but quickly came to oppose when the Bolsheviks destroyed self-ruling cultural institutions and impinged upon personal freedoms – Dubnow became a professor of Jewish history at Petrograd University. He then published the work for which he is perhaps best known: World History of the Jewish People. Comprising 10 volumes, the monumental work was aptly characterized by one critic as “the first secular and purely scholarly synthesis of the entire course of Jewish history, free from dogmatic and theological trappings and fully cognizant of social and economic currents and influences.”

His magnum opus reflected his all-encompassing paradigm that Jewish historical consciousness – not Judaism or Jewish culture – could and should serve as the basis of a nationalist Jewish identity. 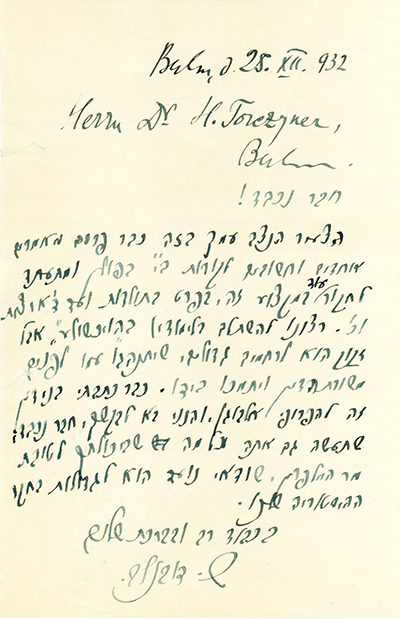 In this December 25, 1932 correspondence, Dubnow writes to a colleague, Dr. H. Torczyner, asking for assistance for a promising young student: “This young man has published several important articles on the history of our people in Poland. He wishes to continue research on the subject, but he needs financial aid; please do whatever you can to help him…”

Although Eliezer Ben-Yehuda is broadly recognized as the father of modern Hebrew, few know that Harry Torczyner (1886-1973) – who later changed his name to Naftali Herz Tur-Sinai – was a close second as Israel’s foremost philologist. Biblical scholar, author, and renowned linguist, he was a professor of Semitic languages at Hebrew University; a member of the Israel Academy of Sciences and Humanities; and president of the Academy of the Hebrew Language, in which capacity, influenced by Dubnow, he launched and completed the Academy’s Historical Dictionary Project.

Dubnow was concerned about the loss of Jewish knowledge and culture and, as early as 1891, issued an appeal to preserve largely forgotten historical materials related to Eastern European Jewish history. He believed Yiddish was key to bridging the gap between maintaining the rich Jewish past and launching an evolving Jewish culture for the future.

In 1925, he became one of the leading founders of YIVO – an acronym for Yidisher Visnshaftlekher Institut, or Institute for Jewish Research (also known as the Yiddish Scientific Institute) – which was established for the study and preservation of the cultural history of Jewish life throughout Eastern Europe, Germany, and Russia, as well as Yiddish lexicography and linguistics. He served as chairman of the executive board of the Institute, which was in large part created by his ex-students and disciples.

From its inception, YIVO’s focus was the peoplehood of Jews, bonded by the Yiddish language; the promotion, coordination, and dissemination of Jewish Yiddish scholarship; and the use of the best available research methods to understand and promote Jewish identity. The four principal sections of the organization, which originally operated out of Vilna, were (1) History (Dubnow’s section); (2) Philology; (3) Economics and Statistics; and (4) Psychology and Education.

YIVO, which became the world’s most venerated Yiddish institution and the only Jewish archives to survive the Holocaust, preserves manuscripts, rare books, diaries, photographs, recordings, and ethnographic material. Among its 400,000 volumes are 40,000 in Yiddish, making it the largest collection of Yiddish-language works in the world.

It published scientific journals and academic works, including Dubnow’s own The History of Chassidim (1931); held international conferences, including its celebrated 1935 World Congress in Vilna attended by leading global historians, editors, and artists; and, perhaps most importantly, directed and trained a circle of renowned researchers.

YIVO’s honorary board of trustees included Freud and Einstein. In this incredible, beautiful, and truly historic April 8, 1929 correspondence, Einstein writes (in German) to Professor Dubnow in the latter’s capacity as honorary chairman of the history section of the Organizing Committee of the Yiddish Scientific Institute (YIVO): 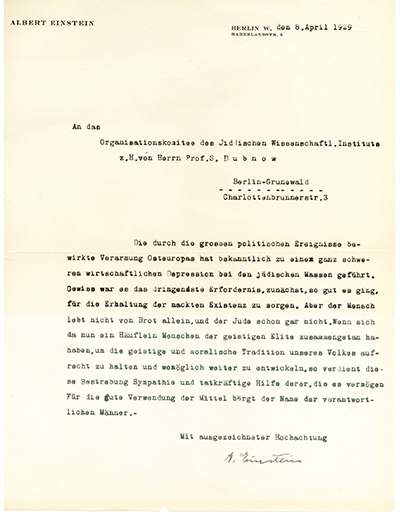 The impoverishment of Eastern Europe, caused by great political events, has, as is well known, brought about difficult economic conditions among the masses. Certainly, the urgent need was to first of all as much as possible to provide for the bare necessities of life. However, man does not live by bread alone, and Jews certainly do not.

When there gathered in the Yiddish Scientific Institute a handful of men “Chosen of Spirit” to preserve and, as far as possible, to advance the spiritual and moral traditions of the Jewish people, this aspiration deserves sympathy and the energetic support of all those who are in a position to give them. The names of those responsible men affiliated with the work is a guarantee for the proper employment of the resources at their disposal.

Later, in a July 28, 1935 letter to the YIVO board, Einstein wrote from Princeton:

Unfortunately, I cannot come to your Congress. I take the opportunity to express to the Institute my appreciation for its work in the service to the education and research of Jewish nation. I believe that the cultural pursuits are the most important goal of the Jewish community and that the Institute’s work, especially during these times of persecutions, is of utmost value.

In a tragic irony, Dubnow – who viewed Jewish history primarily as the history of literature and martyrdom – became one of those martyrs himself when, at age 81, he was murdered by the Nazis and buried in a mass grave in Riga. His final admonition was reported to be “Jews: Write and record!” 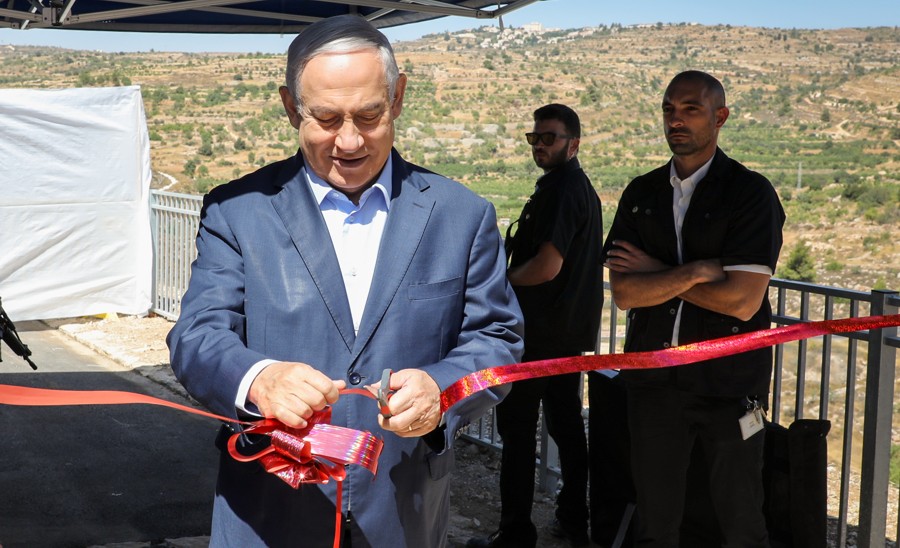 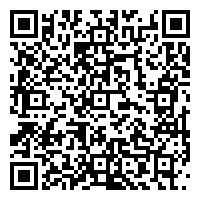