The Black Panthers (or HaPanterim HaShechorim) – an Israeli protest movement of second-generation Jewish immigrants primarily from North Africa and Middle Eastern countries – was one of the first organizations in Israel to address social justice for Sephardi and Mizrachi Jews.

Taking its name from the American group of the same name in an avowed attempt to shock Israel’s conscience, the movement began early in 1971 by mostly second-generation Mizrachi teenagers in the Musrara neighborhood of Jerusalem as a reaction to discrimination against Mizrachi Jews.


The aim of the movement was probably best stated in an editorial in the June 1971 inaugural issue of its magazine, Dvar HaPanterim HaShechorim (Words of the Black Panthers): “Our organization was formed on a backdrop of accumulated bitterness since the first European settlers arrived in the country…. Our organization is the first manifestation of the Jews of the Middle East’s resistance.”

In the years after the establishment of Israel, almost a million Mizrachi Jews left various Arab and Muslim countries and made their way to Eretz Yisrael, where they comprised almost two-thirds of the Jewish population. It is undeniable that in the early decades of the state, half of Mizrachi children dropped out of school; a quota on Mizrachi Jews existed in universities; the overwhelming majority of families on public support were Mizrachi; incarcerated prisoners were disproportionately Mizrachi; and Mizrachi Jews were treated by many as second-class citizens.

The Mizrachim were at the bottom of Israeli society, not only quantitatively, statistically, and economically, but culturally too. Strong, stable, and centuries-old Mizrachi families and communities were devastated in Israel. People with a rich history of gainful employment and contributions to their communities found themselves living in slums; proud men who could no longer provide for their families competed for low-paying day jobs on what became known as “slave markets”; and women were lucky to obtain menial housework, primarily for Ashkenazi families.

A pervasive belief among Mizrachim was that the Ashkenazi majority was determined to destroy their thousand-year culture. And then there was the highly controversial “Yemenite Children Affair” involving the alleged disappearance of thousands of Mizrachi babies who, some claim, were taken from their families as part of a secret Ashkenazi operation for either medical experiments, or adoption by European Holocaust survivors or wealthy American families.

Three separate official Israeli commissions over the years unanimously concluded that while the fate of a small fraction of the “missing” children cannot be traced, virtually all of them died from disease, their parents were informed, and they received proper burials.

Israel acknowledges, though, that the family notifications were handled with great insensitivity and, in the words of Prime Minister Netanyahu, the issue remains “an open wound that continues to bleed.”

Mizrachi anger became even more pronounced in the early 1970s for two principal reasons. First, the economic boom in the years following Israel’s miraculous victory in the Six-Day War somehow did not translate into any substantive benefit for Mizrachim; indeed, the economic inequalities between the Ashkenazi and Mizrahi communities actually deepened.

Second, a massive number of Russian Jews started arriving in Israel, and the Mizrachim watched with understandable frustration as Israel devoted vast resources to settling the newcomers while their own needs were being ignored.

It was in this milieu that the leaders of the Black Panther movement, almost all of whom were young men with criminal records and no evident prospects, began to actively protest what they characterized as willful ignorance on the part of the Israeli establishment of the unique social problems faced by Jews from Arab countries, including disproportionate poverty and ethnic discrimination. Panther leaders organized a hunger strike at the Western Wall and a rally near the Jerusalem City Council building, for which Prime Minister Golda Meir ordered them arrested.

With these demonstrations, however, the Panthers succeeded in developing support across Israel and catching the attention of the Israeli media. They also succeeded in drawing attention to the question of whether Israel really stood for the egalitarian redemption of all Jews returning to their historic homeland.

On April 13, 1971, a Panther delegation met with Golda who, along with most mainstream Ashkenazim, viewed the Mizrachi community as primitive and believed Sephardi and Oriental Jews presented an “ethnic problem” for the Jewish state. After the meeting, Golda famously – or infamously – commented that “they’re not nice” which only confirmed the view of many Mizrachim that the Ashkenazi establishment maintained elitist views of Mizrachi Jews.

In response, the Panthers issued a Haggadah depicting Golda as Pharaoh and themselves as Jews enslaved by the Israeli establishment. Later, in 2011, a ragtag group of Panthers named a route through Jerusalem’s Musrara neighborhood “They’re Not Nice Alley” in “honor” of Golda’s comment.

Golda, however, was not wrong. The Black Panther leadership was inspired and shaped by members of the Matzpen movement, a revolutionary socialist and anti-Zionist Israeli movement founded in 1962 which extolled Che Guevara and other terrorist revolutionaries. In 1972, the Black Panthers unabashedly presented themselves as enemies of Zionism, which they blamed for all of Israel’s social and economic problems, and they protested a World Zionist Congress meeting in Jerusalem by disrupting it with repeated anonymous bomb threats.

The leadership developed a relationship with Arafat and the PLO, and in 1972 it recognized the PLO as the legitimate leaders of the Palestinian people. Thus, sadly, although the aims of the Black Panther movement were proper and just, it alienated many who otherwise might have supported it.

When Golda declined to recognize them as a separate movement, the Panthers organized a massive demonstration for May 18, 1971, which came to be known as “The Night of the Panthers.” During the unauthorized rally, well over 6,000 militants demonstrated in Jerusalem’s Zion Square, which they demanded be renamed Kikar Yehadut HaMizrah (“Eastern Jewry Square”).

When Israeli security forces arrived at the scene to break up the demonstration, a heated mob pelted them with stones and Molotov cocktails, resulting in 20 hospitalizations and the arrest of 74 demonstrators. Subsequent Panther rallies, which took place across Israel, were marked by violence and clashes with the police.

In their infamous “Operation Milk” in March 1972, the Panthers stole all the milk intended for the wealthy in Jerusalem’s Rechavia neighborhood and transferred it to poor families in the suburbs. Attached to every bottle was a short note explaining that “milk is more critical for poor children than for rich people’s cats.”

The violent May demonstration and other Panther actions proved successful when the government designated a public committee to consider the Panthers’ claims and propose solutions. The committee concluded that, indeed, discrimination existed throughout Israeli society and recommended that the government allocate substantial funding to address social inequities.

Israel’s 1972 budget, dubbed by many “the Black Panther budget,” tripled expenditures on education, healthcare, and welfare; however, these resources were soon reallocated to national defense in the wake of the Yom Kippur War.

The Panthers fielded its own slate of candidates for the December 1973 elections. Two weeks before the election, on December 15, they planned a huge political rally in Jerusalem. Exhibited here is a rare original flier for that demonstration from my collection: 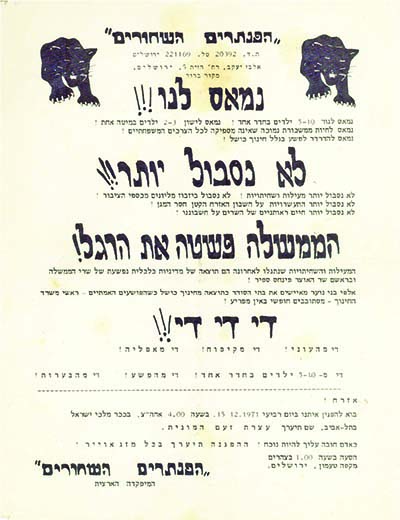 WE WILL TOLERATE IT NO LONGER!!!

THE GOVERNMENT HAS GONE MORALLY BANKRUPT!

The recent embezzlement and corruption are the result of a criminal economic policy of the heads of the government and at their head is the Treasurer Pinchas Sapir!

Thousands of youths are serving in prisons as the result of failing education when the real criminals – the leaders of the Education Ministry – wander around freely without hindrance!

Come demonstrate with us on Wednesday, December 15, 1971 at 4:00 p.m. at Kings of Israel Square in Tel-Aviv, where a mass rally of rage will take place.

As a person, it is your obligation to be present! The demonstration will take place in all weather conditions!

In the wake of its election loss, the Black Panther movement essentially ended. It had failed to radicalize most Mizrachim. Nonetheless, the issues and needs of Mizrachim subsequently took a front and center position in Israeli politics. A few Panther leaders joined left-wing Knesset parties, but most activists and members assimilated into various mainstream parties, including Shas and Tami, through which they pressed the Mizrachi agenda.

The important role the Black Panthers played in raising public consciousness led to broad public debate, contributed significantly to the success of the Likud during the 1970s and 1980s, and, according to many leading commentators, was perhaps the deciding factor in Menachem Begin’s stunning victory in 1977, as he became Israel’s first non-Labor prime minister since the founding of the state.

Begin was beloved by the Jews who had emigrated from Yemen, Iran, Syria, Morocco, and other Arab countries and who often chanted “Begin melech Yisrael, chai v’kayam (“Begin, the king of Israel, lives and endures.”

At the end of the day, the Black Panther movement did not eliminate inequalities between Ashkenazi and Sephardi Jews in Israel, but it did effect increases in government welfare spending and stimulated a renewed sense of communal pride among Mizrachim both profound and lasting. And although problems remain, Mizrachi Jews have entered the mainstream of Israeli political, military, cultural, and economic life.