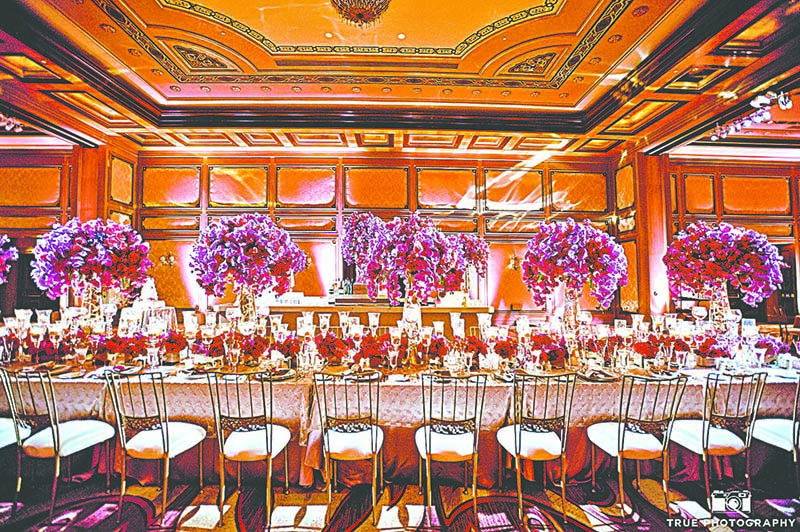 Is there anything inherently wrong with a person spending vast sums
of money on a wedding or bar mitzvah if he’s rich and can easily afford it?

When wealthy people make very expensive weddings or bar mitzvahs, others feel pressured, leading parents of limited means to feel inferior or to spend money on celebrations that they need for basics.

In general, conspicuous displays of wealth is not appropriate. Aside from representing a distortion of Jewish values, it plays into anti-Semitic stereotypes. If wealthy Jews need to demonstrate to others how successful they have become, let them make major contributions to tzedaka, yeshivot, or some other worthy cause.

It’s an unfortunate manifestation of how much Orthodox Jews have adopted American materialism that making expensive weddings and bar mitzvahs has become acceptable. It isn’t even a favor for the bride and groom or bar mitzvah boy since attention is transferred from them to their parents’ wealth.

To answer this question, the following factors should be considered:

1) Is the simcha commensurate with the person’s social standing and the simchas of people of similar standing in that community?

2) Will hosting a less lavish simcha than is customary have a negative effect on a person’s social status amongst his friends and business associates that could affect his parnassah?

3) If this money isn’t spent on the simcha, could it be used for better causes – i.e., tzedakah, to support the couple, etc.? Or is it not an either-or situation?

4) Is the ostentatious affair out of character for that place and thus a demonstration of yehura (haughtiness), which is a negative characteristic? (See Shulchan Orach, Orach Chayim 2 and Mishnah Berurah 5, quoting the Rambam.)

5) Will this affair be observed by the non-Jewish public, which can cause jealousy and ill feeling against Jews? (See Bereishis 42:1 and Taanis 10b, which teaches us that showing off in front of the non-Jewish world is improper and can lead to jealousy and hatred.) The Shearis Yisrael lists this behavior among the reasons the Jews were expelled from Spain.

I remember a number of years ago a certain community made a grandiose wedding for its leader’s daughter. It was covered by the secular media, which broadcasted how many hundreds of pounds of chopped liver and other delicacies and extravagancies were part of the wedding. I can imagine the reaction of non-Jews to this information considering that a good portion of this specific community was on welfare and food stamps.

After considering all these factors, one can ask daas Torah as to the proper execution of said simcha.

There are many reasons why one should try, at all costs, to avoid excess at a wedding. First, we are in exile,

and it is not wise to be too showy. As it is, the most basic Jewish wedding is beyond lavish compared to the average gentile wedding. So to do anything more would be flaunting our wealth and is ill-advised.

Second, it causes an incredible amount of jealousy and furthers the race to “keep up with the Joneses.” The cost of living for a standard Orthodox family is already beyond the earning power of most people, so to up the ante and make it even more difficult should be avoided.

Third, and most importantly, we human beings cannot help but be influenced by the way others look at us. If I make a very showy, ostentatious wedding, I will get a lot of publicity and honor for it, which will cause me to value wealth to a greater extent. Even if I claim to be a tremendous tzaddik and beyond the influence of honor, surely my children and those who I’m close to will be greatly impacted by it.

If we were put on the planet to pursue money, then certainly we should flaunt it. But assuming that we were put on this planet for purposes far greater than just making a dollar to spend a dollar, we shouldn’t make it more difficult for us to remain focused on the reason we are here – which is to grow, to accomplish, and to become the great human beings that Hashem wishes for us to be.

People should spend what they can properly afford. But the hallmark of every wedding or bar/bat mitzvah celebration should be modesty. When rich (or those who wish to appear rich) spend excessive amounts in order to impress guests with their opulence, it is not only bad taste; it’s also bad religious values.

One can have a very high quality (and very expensive) celebration without being ostentatious. The greatest elegance is that which doesn’t try too hard to be elegant.

Rabbi Haim David Halevy, late Sephardic Chief Rabbi of Tel Aviv, discussed expensive weddings in volume one of Asei Lecha Rav (no. 24) and found no halachic reason to forbid such events as long as the hostscould afford them. He added:

“These events provide ongoing income for hundreds of families – from the producers and distributors of agricultural products to the caterers and waiters. What need is there to cut off this economic branch that grows and develops day by day? … May celebrations increase in Israel.”

A problem arises when people feel the need to spend far more than they can afford to maintain appearances. They go into debt or ask others for financial assistance. This is not appropriate. Let all live and celebrate within their means – in a happy, modest, non-ostentatious way. May celebrations increase in Israel.

Is having it and flaunting it an acceptable Jewish value? Let’s consider Judaism’s economic system. I would describe it as “capitalism with a conscience.” In promoting free enterprise, the Torah is clearly capitalistic. But it is a conditional and compassionate capitalism.

Ten-percent tithes, leaving a corner of one’s field unharvested, leaving forgotten gleanings and sheaves for the poor – these are not optional extras or pious recommendations, but mandatory contributions. Judaism thus presents an economic system that boasts the best of both worlds – the advantages of an unfettered, free market without the drawbacks of corporate greed.

So, by all means, be a capitalist, but be a kosher capitalist. To that end, I maintain that if someone can afford to make a more lavish affair, more power to him. But he should give matching funds to a charitable cause; and let it be known. That would set a sterling example and shut down those that don’t fargin.