A rare and important publication I recently acquired is the first edition of the Chok Leyisrael. Its printing was a landmark in Hebrew printing as well as printing in general. Published in Cairo, Egypt, in 1740, it is one of the very first books published in any language in the entire continent of Africa.

A handful of books, all exceedingly rare, were printed in the 16th century in Fez, Morocco, and possibly in Egypt by Jewish exiles from the Iberian Peninsula. Following that brief period, no Hebrew books were published until the Chok Leyisrael in 1740. The next Hebrew book printed in Cairo did not appear until 1905. 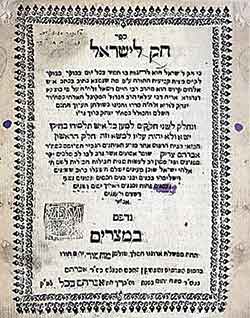 The printing press became established in North Africa surprisingly late. In the modern era, printing did not return steadily until the late 19th century. This may be due in part to Islam’s view of the printing press. Under the rule of the Ottoman empire, for many years the printing of the Koran was punishable by death, and as a result, the printing press was not introduced to areas under their control.

The Chok Leyisrael that was printed here for the first time quickly became popular and was often reprinted throughout the Jewish world. Based on the teachings of the Ari Hakadosh (Rabbi Isaac Luria, known as the AriZal) and R. Chaim Vital (disciple of the AriZal), Chok Leyisrael is a compendium of Torah texts designed for daily or weekly study. The idea of the work is to learn a small portion from the different genres of Jewish writings daily. Such was the custom of the AriZal as noted by his disciple: “And this was the custom of my teacher: after coming out of synagogue and eating his breakfast, he would wrap himself in tzitzit and put on tefillin, and afterwards read the readings as set out below, with the preliminary meditations set out below.”