An American comics writer and artist, Will Eisner (1917-2005) is best known for creating the “graphic novel,” a term he coined for complex illustrated texts in which he employed film techniques and sequential art storytelling. He is credited with transforming comics into a rich combination of art and literature.

Eisner is also known for the cartooning studio he founded; for his use of comics as an instructional medium, particularly for the army during his WWII service; and for Comics and Sequential Art, the first American scholarly analysis of comics. In 1988, the comics industry honored him by creating the Will Eisner Comic Industry Awards (a.k.a. “the Eisners”), the comics industry’s equivalent of the Academy Awards.

Eisner was born into a Jewishly-observant family – he described his family as “lapsed Orthodox” – that had immigrated to a heavily Jewish community in Brooklyn. In his work, he drew on his experience growing up amongst the ragtag assortment of characters that typified early 20th-century Brooklyn, including a potpourri of disreputable individuals and unsavory personalities who came to define his colorful and dramatic characterizations.

In his preface to The Plot (see below), Eisner wrote: “My parents were Jewish-American (that, by the way, is not the only reason I remain a Jew)…. My parents were neither Orthodox nor Reformed, but they were “believers,” which may account for my Yiddish neshama (soul)….”

Eisner developed a negative view of Judaism when his father went to synagogue to recite Yizkor on Rosh Hashanah but was denied entry because he could not afford to pay for tickets. The younger Eisner never again entered a synagogue until his wedding, but later joined a Reform Temple, which he rarely attended, for the benefit of his children. However, he distinguished Jewish institutions, which he generally held in low regard, from the fundamentals of Judaism itself, which he embraced: “As time went on, I developed a strong Jewish identity. I read as much about Jewish things as I can.”

Eisner eventually emerged as a standard-bearer for Jewish existence, writing about his heritage as a Jewish American and exploring Jewish culture, the experiences of first-generation American Jews, and the impact of anti-Semitism. As he wrote in The Plot:

I grew up in the Great Depression and experienced prejudice – painful incidents and indignities that often befell Jews in our society at that time. I remember being angry at the shtetl attitude of my parents, who advised that we should be “quiet and not offend the goyim.” To them the Holocaust was another, only much bigger, pogrom….

Eisner, who was self-taught, sold his first cartoon to Wow What a Magazine (1936) – at the suggestion of his high school friend, Bob Kane (who would later achieve comics immortality himself as the creator of Batman) – before joining several comic art studios in New York, becoming successful and launching his own studio in 1936.

A large majority of comic book writers and artists at the time were Jewish, but anti-Semitism was pervasive in the industry, and Eisner encountered many who attempted to obstruct his career because he was Jewish. Several publishers, who viewed him as a “greener” (an unsophisticated child of immigrant Jews) sought to take advantage of him and appropriate his work as their own. 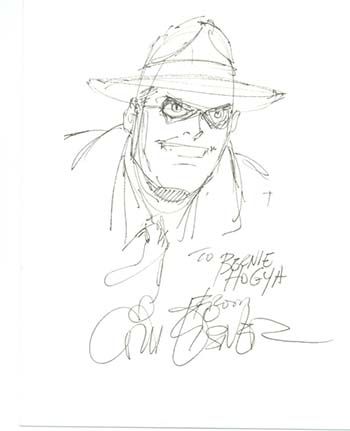 Exhibited here is an original signed and inscribed ink sketch of Eisner’s most famous character, masked vigilante Denny Colt, a.k.a. “The Spirit,” the cemetery-dwelling, crime-fighting detective without superpowers (this was very unusual for the time) who “died” and was reborn. The comic strip named after him was unique in that Eisner served as both artist and writer, which is uncommon even today. “The Spirit” was noteworthy for blending various genres, including horror, romance, adventure, and humor, and Eisner thereby almost single-handedly elevated comics from the realm of juvenile entertainment into a respected new form of art and literature appealing to adult masses.

The strip was published and distributed as a 16-page Sunday newspaper insert. Most commercial operations spend millions of dollars testing and marketing their logos, but Eisner thought it was more challenging and inventive to come up with a different masthead for “The Spirit” every week – which he did for over 600 strips. The strip, the first to be nationally syndicated, debuted on June 2, 1940 and reached a circulation of over five million.

Although Eisner later wrote many comics featuring overtly Jewish characters, “The Spirit” (which was created at a time when clearly identifying the religious affiliation of leading comic book characters was strongly disfavored) was not explicitly so. Denny Colt, though, was openly and vehemently anti-Nazi, and Eisner suggested in many interviews that he intended Colt to be Jewish. Cartoonist Jules Feiffer, who often collaborated with Eisner, famously noted that “his nose may have been turned up, but we all knew [Colt] was Jewish.”

In the June 22, 1941 issue, Hitler comes to New York and meets Colt, becomes enlightened, and even repents for his crimes; he is ultimately assassinated, however, by one of his own. Feiffer characterized the work as “the most eccentric political homily ever produced in comics form.”

Eisner ceased writing “The Spirit” to focus on longer graphic novels, most of which dealt with Jews and Jewish themes: “I understand Jews, and I like to write about what I understand.” In the first of these, A Contract with God (and Other Tenement Stories), a striking model of autobiographical intimacy, he drew on his own experience of losing his 17-year-old daughter to leukemia and developed his personal metaphor for Jewish existence. Contract is a modern-day Job tale that depicts the horrendous life of a deeply religious, 20th-century Jew dealing with economic deprivation and torn about an ancient faith that seems out of touch with the modern world.

In To The Heart of the Storm, he takes an autobiographical look at his life and the life of his immigrant parents as they struggled against anti-Semitism in America, and in The Name of the Game, he tells the multi-generational story of one Jewish family – modeled in part after the family of his wife, Ann – as it struggles through assimilation and rises through the social ranks in New York.

In Fagin the Jew, Eisner presented a detailed backstory on the notorious villain in Dickens’ Oliver Twist, casting him as a complex and troubled anti-hero and giving Fagin the opportunity to tell his tale from his own perspective. Furthermore, Eisner explores the history of London’s Ashkenazic community and Eastern European Jewish immigration to England, studies the visual stereotypes that existed at the time, and argues that Dickens never intended to defame Jews.

Eisner was committed to fighting anti-Semitism on all levels. This commitment is perhaps most manifest in his final project – and his only non-fiction work – The Plot (2005, published posthumously), a brilliant and comprehensive graphic history of The Protocols of the Elders of Zion, the most notorious and enduring anti-Semitic screed of all time.

Employing his graphic novel technique to perfection, Eisner projects himself into the narrative as a contemporary writer conducting research for a book on the subject, and goes on to provide a detailed account of the origins and evolution of The Protocols – beginning with 1878 Paris, where a Russian agent plagiarizes an old French anti-Semitic philosophical work virtually word for word and creates a document implicating Jews in a nefarious scheme to take over the world.

The Protocols, which purports to describe a Jewish plot for global dominion, is today a well-recognized literary forgery – and a laughable one at that, with conclusive proof that it is a demonstrable scam going back to 1921. It professes to document the minutes of 24 or 27 meetings (the numbers, like much else, are internally inconsistent) held in Basel (or perhaps somewhere else, including the Jewish cemetery in Prague) at the time of the First Zionist Congress (1897). During these meetings, Jewish leaders (unnamed, of course) discuss their goal of global Jewish hegemony through the subversion of Christian civilization and the destruction of public morality by, among other methods, controlling the press and the world’s economies.

First published in Russia in 1903, The Protocols was translated into multiple languages, and disseminated internationally, including in the United States, where Henry Ford funded the printing and distribution of 500,000 copies. Hitler and the Nazis publicized the text as a legitimate document (even though it had already been exposed as fraudulent), and after the Nazi Party assumed power in 1933, it ordered the text to be studied in German classrooms.

There is little question that Hitler used The Protocols as a primary justification for initiating the Holocaust; besides his specifically citing The Protocols in Mein Kampf, the Allies found Nazi propagandist Joseph Goebbels’ private diary after the war, in which he writes: “I have devoted exhaustive study to the Protocols of Zion…. In reading them now, I find that we can use them very well…. At noon, I mentioned this to the Fuhrer. He believed the Protocols to be absolutely genuine!

The great importance of The Protocols lies in its permitting anti-Semites to reach beyond their usual circles to a large international audience. The book’s vagueness – almost no names, dates, or issues are specified – has been key to its success. As Eisner discusses in The Plot, this “weapon of mass deception” is still widely available today and often presented as a genuine document, particularly in the Arab world. Modern translations have been issued and broadly disseminated in Spain, Italy, India, Japan, Mexico, Great Britain, the United States, and pretty much everywhere else.

Exhibited here is a 1964 report by a Subcommittee to the United States Senate Committee on the Judiciary, which unanimously concluded:

It is impossible for a fair-minded person of any commonsense not to see that the “Protocols” are the fictional product of a warped mind and that for years they have been and still are the chief staple of the anti-Jewish pamphleteer.

Hundreds of books and scholarly studies had been written demonstrating beyond any doubt that The Protocols is a hoax. These works, however, were written mostly by scholars employing dry academic language and were largely directed at scholars and those already convinced of the document’s illegitimacy. Eisner wanted to “deal head-on with this propaganda in a more accessible language.” And he did so in the form of a graphic novel.

On April 15, 2019, I attended an excellent lecture at the Smithsonian Institute on The Protocols presented by the well-regarded historian Ralph Nurnberger, who cited Eisner’s The Plot as one of the most valuable and important books on the subject. I highly recommend it to readers who seek a full exposition of this most important subject presented in a most entertaining form. 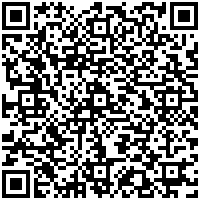