Words are one of the most powerful tools we have in this world. We must choose our words carefully, as life and death are in the hands of the tongue. We teach our children from when they are very small to say “please” and “thank you,” and we try to shower them with words of love and encouragement at all times. And it is during childhood, whether at home or at school, from parents, family members, or teachers, that a good word can make all the difference and a bad word can finish off a child for life. What a great responsibility we have with our words – to mold and build or to destroy.

What kind of human being you will be depends largely on how you utilize the greatest gifts the Creator gave you – the ability to think and to speak. Every time you speak to another person, you have two choices to make: What should I say to this person right now, and how should I say it? A wise and kind choice of words will elevate you and make the person you are speaking with feel good.

It is a great misuse of this awesome gift to cause other people pain with our words. The Talmud states that it is a worse crime to cause pain with words than to cheat another person financially. Why? Money can be returned. Words, once said, can never be taken back. The harm and damage of insults and put-downs can last for a lifetime. When you insult someone and cause distress with your words, you are striking against the dignity of the other person.

The highest level of kindness is to build someone’s self-image. For the same reason, the worst crime is to rob someone of self-esteem and lower his or her self-image. Few people are truly mean and sadistic. But everyone gets frustrated, even angry, at times. These feelings are the breeding ground for comments that hurt and inflict pain.

Ask any counselor or therapist and you will hear of the great damage caused to children who were insulted by their parents or teachers, siblings or peers. The unseen scars of hurtful words cause pain and anguish over and over again. Ask any marriage counselor and you will hear of the mutual damage and pain caused to husbands and wives by the painful statements that were said in frustration and anger. Even the nicest people speak in ways they shouldn’t when they are in a bad mood. The most important and hardest point to keep in mind is: Think before you speak. Words are like arrows, says the Psalmist, and like smoldering coals. Like arrows, for a man stands in one place and his words wreak havoc on another’s life many miles away. And like a coal whose outer surface has been extinguished but whose interior remains aflame, so too, do harsh words continue to work their damage long after their external effect has evaporated.

Words kill in many ways. Sometimes they set in motion a chain of events that turn them into a self-fulfilling prophecy; sometimes they are deflected off the object of their venom to strike some innocent bystander; and sometimes they return like a boomerang to pursue their originator. By whatever route they travel, hateful words inevitably lead to hateful actions, possibly years or even generations after they are uttered. Human nature is such that thoughts strive to find expression in spoken words, and spoken words seek realization in deeds – often by circular paths that the original utterer of those words neither desired nor anticipated.

But the power of the word runs deeper than its potential to translate into action. Even if this potential is never realized, even if the spoken words never materialize in the “world of action,” they still exist in the higher, more spiritual “world of speech.” For man is not only a body, but also a soul; he is not only a physical being, but also a spiritual creature. On the physical plane, spoken words may be significant only as potential actions; in the soul’s reality, they are actual.

There was once a boy with limited language skills – his speech was slow and simple. But his family treated him like all the rest, never letting him feel less than the other, more highly functioning children. He made it only through eighth grade, and then no institution would take him. This occurred many years ago when the education system wasn’t as developed as it is today. But this boy was blessed with the ability to say kind words to whomever he saw. He only saw good in others.

Eventually he married a woman with some disability as well, yet she was smart and was able to see the great potential her husband had. He talked to everyone he met and found the good in them all. This quality made him loved and accepted. He would make all kinds of connections between the people he knew, and his wife, without him knowing, would then call the people involved and ask for a small broker’s fee since she and her husband had no income. So without any education but with many good words, this simple and slow man lit up the world and everyone around him with his good words. This just goes to show how powerful words can be, for better and for worse.

Being a gifted orator is a wonderful trait to have. Yet I think that it’s an even greater achievement to have the ability to listen to others, and sometimes to even keep silent. 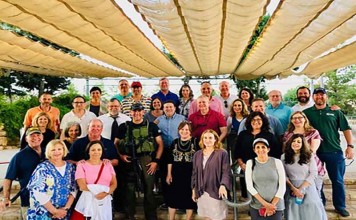 A Shul With A Story: Aish HaTorah St. Louis – Changing The World, One Jew At A Time