Five years ago, 26-year-old Moshe Hammer, z”l, a Lubavitch artist who frequently worked through the night, stepped outside for a walk in Los Angeles, to clear his head and recharge his creative batteries. As was his custom, Moshe rambled miles from his apartment in the Fairfax district.

Tragically, Moshe was struck by a truck and instantly killed.

For two days, Moshe’s parents, Joan “Pessie” and Yosef Hammer, did not hear from their son. They were frantic, searching the neighborhood, calling friends, trying to locate Moshe.

Two days after Moshe’s disappearance, July 15, 2004, there was a knock at the door; a local rabbi, rebbetzin and a police officer delivered the tragic news.

A few days later, Pessie Hammer went to clear out her son’s apartment. In the bottom drawer of his desk she discovered over three hundred black and white ink drawings.

Mrs. Hammer knew that her son was a talented artist. As a child, Moshe drew comic books with hard-charging superheroes and sold them to his classmates. But Pessie and Yosef, a postal worker, had no idea that their son’s body of work was so massive and of such quality.

Sorting through Moshe’s work, Pessie discovered that Moshe had illustrated a Passover Haggadah, a Book of Esther, The Song of Songs, as well as the entire siddur.

I met the Hammers when Pessie wrote to me after reading an article about our son Ariel Chaim, a”h, that I wrote for The Jewish Press. We lost Ariel a year earlier and understood exactly what the Hammer family was enduring.

Sitting in their comfortable Fairfax home, my wife Karen and I offered a measure of comfort to this fine family. The Hammers generously allowed us to examine Moshe’s drawings.

I sorted through the single sheets one at a time. Nothing prepared me for the stunning images that overflowed with intricate details. I was dumbfounded by the inner coherence of each work.  It was as if I had discovered a geniza of Jewish art in, of all places, Hollywood.

“What do you think?” Yosef asked me.

“Your son was a genius,” I said with no hesitation whatsoever.

Moshe Hammer’s art can best be understood as a cross between medieval illuminated manuscripts and the modernity of a sophisticated comic book. Hebrew letters dance like Chassidic Jews. The calligraphy and drawings reveal Moshe’s intensive study of the traditional commentaries of the sacred texts.

Moshe Hammer’s art is also deeply cinematic. Each drawing is informed by a central narrative. Take a look at his touching Sh’ma. A mother and father watch over their sleeping children. But also present in the fairy tale bedroom are angels and Cherubim.  A black spider (the Angel of Death?) dangles from a web, a sinister presence creating an excruciating tension. We want to know what happens next. How does the story unfold?

Sadly, we know that we can never completely protect our children.

The drawings are filled with mystical allusions, and the eye focuses on each beautifully resolved composition invariably discovering worlds within worlds. There are prophets on flying chariots, children in the care of baby-faced archangels and magical menageries. There are Seraphim, storm tossed ships, weeping Kiddush cups, and everywhere Moshe’s gentle humor.

Moshe Hammer’s drawings are, to my mind, unique in the history of Jewish art. Here the sacred is elevated and honored, yet at the same time brought down to earth so that the most casual observer – children are mesmerized by Moshe’s art – can enjoy the flowing, sensuous shapes that move across the page like a host of flying angels. Jewish prayers are embedded in every drawing so that image and letter becomes a single unit.

This is prayer as art and art as prayer.

Moshe Hammer worked exclusively in black ink and ordinary pencil. He did not want to be distracted by color. And, no doubt, he was following in the tradition of holy Jewish calligraphy, scribes who etch each letter of the Torah with pure black ink on a field of white vellum.

Moshe was, for the most part, a self-taught artist. He did not attend a high-tuition art school. He was not grounded in classical art. I very much doubt if the pious young Lubavitch was familiar with the Christian images of the Italian Renaissance. But Moshe Hammer was no primitive. It’s as if his fertile mind absorbed all the great lessons of art history – from the classical periods to the explosion of modern abstractions right on to the contemporary illustrated novel. In what can only be described as G-d given talent, persistence, and very hard work, Moshe Hammer’s body of art emerges as a fully formed aesthetic.

Two years after Moshe’s tragic death, a selection of his art was displayed at the Jewish Artists Network Gallery in Los Angeles. Lubavitch Hassidim, modern Orthodox, secular Jews, sleek art lovers in Armani and tattooed hipsters in black leather attended the opening. It was a unique gathering where very different communities agreed on the importance of an original Jewish artist and his profound vision.

Pessie told me that her son was always drawing. When Moshe was three years old, he drew a chicken coming out of an egg.  Most astonishing was the fact that the egg was perfectly oval. In elementary school, Moshe handed in a drawing and his teacher gave him a failing grade because she was convinced that Moshe had copied the drawing. Later, the grade was changed to an A when Moshe quickly sketched a beautiful drawing right in front of the teacher’s eyes.

After high school, Moshe supported himself through various jobs that allowed him to pursue his artistic calling. Moshe drove hearses, and sat as shomer for the Los Angeles Chevra Kadisha.

Moshe’s sister, Sophia Sadeghi (Hammer) wrote me a beautiful letter that gives some insight into Moshe Hammer’s life and art:

“During the last ten years of his life, this intense personality that he was, turned completely inward and in to his artwork and in his striving toward meaning and toward a spiritual passion. He became intense not outwardly any longer but completely in a spiritual capacity The intensity that we all see in his heart was the intensity that he kept hidden from the world until after his death when my mother discovered the vast treasure trove of his artwork. Yes, indeed he was still full of life and his mind was an explosion of metaphysical creativity and genius that we can now relish through his works of art.  I thank G-d that He blessed the world and us with Moshe’s brilliance and left us with so many masterpieces. His life was truly a neshamah that came full circle. He most definitely left this world as close to an angel as a human being can possibly be.”

On Moshe’s fourth Yahrzeit, Karen and I were honored with an invitation to a memorial at the Hammer home. Several rabbis delivered lovely and appropriate divrei Torah.

The work just took my breath away.

Staring at the work I could only imagine what the young and brilliant Moshe Hammer would have produced had he lived.

As I was lost in my reverie, one of the guests spontaneously started singing a Chassidic niggun of “Ani Ma’amin,” “I Believe… in the Coming of Moshiach.” His powerful voice soared, and soon all the guests joined in.

In an instant I realized that though Moshe Hammer was taken from this world his art will serve as a testament to a life interrupted – an art of Jewish devotion that will live forever.

I chatted with Pessie Hammer for a few minutes, pulled out my wallet, and displayed Moshe’s Wayfarer’s Prayer that Pessie had reduced and laminated as a gift to me.

“I carry it everywhere,” I said.

Pessie smiled through her tears.

May Moshe Hammer’s neshamah have an aliyah.

Robert J. Avrech is an Emmy award Hollywood screenwriter and the author of the award winning author of the novel the Hebrew Kid and the Apache Maiden. He blogs at Seraphic Secret. 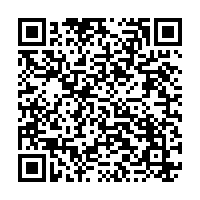