Why should we bother with art? A waste of time, bitul Torah, perhaps even a lure into apikoresviewing art, not to mention making it, could be viewed as a can of worms best left unopened. Alas, our tradition is to follow the ways of our forefathers and, since Bezalel, the Jews of Dura Europos, Bet Alpha and countless other pious Jews for 2,000 years have partaken of the visual arts, it becomes our sacred duty to explore both our inheritance and those who continue to create Jewish art.

Nonetheless, contemporary Jewish art presents a complex of problems, speaking as it does in unfamiliar language. It seems to refuse to be direct – making, instead, images that cause more confusion and head scratching than a nice simple illustration of a rebbe. Indeed we need a few guidelines to get in synch with these new images.

A work of art needs at least three things in order to command our serious attention: Subject, Execution and Meaning. Pretty pictures are fine as entertainment, but for Jewish art to have cultural significance it must address a Jewish subject. All classical Jewish texts, Tanach, Gemara and Midrashim, provide endless opportunities along with the vast saga of Jewish history and experience that have shaped us as a people up to the present day. The choice of a Jewish subject is shaped by individual preference and taste that selects from some aspect of the Jewish past.

Naturally, the execution of the work of art is paramount; if it cannot communicate it fails as art. However, this aspect is determined by contemporary aesthetic and cultural criteria. What made art great 200 years ago may be but superficial illustration, today. The execution of contemporary Jewish art is always contextualized by the aesthetic norms of the surrounding culture; these norms, whether of modernism or postmodernism, have become the visual and intellectual language that makes cultural production intelligible in the present.

Finally, the meaning that we as viewers derive from our encounter with Jewish art must take us somewhere. If it only confirms what we already believe and know, it is a mere palliative, a sugar pill, more likely than not, to dull our senses into repetitive somnambulant thinking. Jewish Art’s function is ideally much closer to Torah study. It must challenge and change us, push us to learn something new. Jewish art must make the future look different.

Archie Rand’s most recent work is a case in point: “Nineteen Diaspora Paintings”, currently on exhibit at the Hebrew Union College Gallery until January 12, 2005 is an eclectic presentation of the traditional Jewish prayer, the Amidah. In a dazzling conflation he applies a different Biblical story to each of the 19 blessings, transforming blessings into reimagined narratives. In a further perplexing tactic, the images he utilizes to narratize the blessings are all derived from comic book imagery and pulp fiction illustrations, thereby plunging the Biblical text into the morass of pop culture. As we examine each point of our artistic criteria Rand challenges the viewer in ways that at first appear downright puzzling.

As part of this series, Rand’s depiction of the “Twelfth Amidah Theme: Punish Heresy: Jepthah” requires considerable analysis. The notion of utilizing one blessing of the Amidah is straightforward enough except that Rand has twisted it well beyond recognition. The Amidah is the quintessential prayer, praising Hashem, His might and Holiness, next petitioning G-d for all of our personal and communal needs and finally concluding with heartfelt thanks. In prayer we beseech our Creator and yet, Rand radically shifts the subject of prayer to become a narrative, a story. Stories, especially Biblical stories, can suddenly tell us much more, expand the subject and paradoxically become less personal (as petition is inherently) and somehow more understandable.

A shift is also seen in the execution. His depiction reminds us of a 1940s melodrama with a determined patriarch in suit and tie on the left contrasted to a despairing young woman weeping in an armchair. Each actor is “spotlighted” to theatrically emphasize their respective role positioned over a purple triangle of the Hebrew text from Judges that fills the lower left. The image bears more than a passing resemblance to a comic book illustration, confounding any relationship to “serious art.” And that is of course, exactly the point. Rand is salvaging the detritus of banal pop culture to speak about grave events and portentous meanings. He utilizes a seemingly superficial technique to disarm the audience into “reading” the image just like one would read a comic, quickly to access the meaning. Except, once we have been casually drawn into the comic story, we are enmeshed in Biblical complexity. Rand’s use of the comic reflects a postmodern irony that subverts not the subject, but our resistance to delving below the surface of the Biblical.

The meaning of “Jepthah” rests between the intent of the blessing and the uneasy tension created by the seeming disjuncture of the narrative. This blessing, pointedly added in exile by Rabban Gamliel, condemns heretics and slanderers who threaten the Jewish people, either spiritually or physically. This prayer petitions for communal survival in a hostile world by annihilating the source. But what could it possibly have to do with the horrific story of Jepthah found in Judges 11:40?

Jepthah, a judge of Israel for six years and Gileadite warrior pleaded with G-d for victory over the Ammonites, pledging to sacrifice whoever came out of his doorway upon his victory. His only daughter greeted him upon his return and thus condemned herself. Jepthah’s ignorance and stubborn refusal to ameliorate his vow led to her awful fate. His tragic grief and his daughter’s resignation (seen in the painting as the girl staring at her father’s back) led the daughters of Israel to yearly lament her fate. This story condemns vows, equating their extremism and one dimensionality as the sinful equivalent of murder. Rand’s juxtaposition with the blessing forces us to understand that such zealotry is heresy, equally threatening us, personally and communally.

In what may be the most radical aspect of this painting, Rand is undermining the literal meaning of the blessing itself. The blessing asks that G-d “cut down [our enemies]uproot, smash, cast down and humble the wanton sinners” And yet in light of Rand’s painting, in fact in light of Jepthah’s fate, we must conclude that the destruction must be vented on heretical ideas, not heretical people, lest we commit the heresy of Jepthah ourselves. In order to do right, we must be sure to do no wrong.

Archie Rand’s painting takes us into the future, shaping our reflection within our prayers. He does so in an obtuse manner, shifting our concentration from petition to subversively experiencing a biblical narrative as contemporary drama. Suddenly nothing is assured except the questions we ask while learning about the artwork.

One thing that seems certain is that Archie Rand knows how to make some of the most challenging Jewish art created today. What remains is for his audience, a Jewish audience, to begin to learn how to read it. That’s Archie’s prayer.

Richard McBee is a painter and writer on Jewish Art. Please feel free to contact him with comments at www.richardmcbee.com.
Advertisement 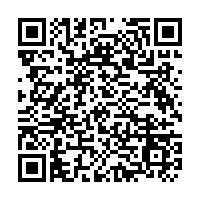