“Did you hear if he died?” asked one neighbor.

“Is he still alive?” asked another


Early Friday morning, a security guard was attacked at the mall in Maale Adumim. His name is Tzvika…Tzvika ben Batya…Tzvika, the son of Batya. There are variations to the story of what happened. There is, apparently, some level of military censorship in place and I don’t know how much is rumor, how much is truth; how much is allowed to be published, how much is being held back.

What we know is that a young Arab worker attacked Tzvika with an axe and a knife. Tzvika was unarmed. The Arab worker then stole Tzvika’s keys and let himself out of the mall and ran off. Tzvika was found, seriously wounded and taken to the hospital where he is fighting for his life.

After Shabbat, checking the news, we learned that he had survived surgery but was still sedated and in very serious condition. The Arab terrorist has still not been found. Meanwhile, two other Arabs opened fire on a car very close to Maale Adumim – no injuries in that attack.

This evening, I thought of going for a walk in my neighborhood. I had brownies in the oven for Davidi to take back to the army; I have a long week ahead of me and this is my last chance to steal a bit of time…and so I did.

I walked around because that’s the kind of neighborhood it is, because we cannot stay locked in our homes. I met several friends walking or just standing and speaking to others. It seems I am not alone in our determination to live our lives as we will.

We will pray for Tzvika. Even now, security forces are closing in on his attacker. For now, no Arab workers are allowed into Maale Adumim for the next four days. People are calling for a boycott of stores that hire Arab workers.

Is it racism? Well, considering the reason that Tzvika was attacked was because he was a Jew, it seems to me the first act of racism came from them.

Is it collective punishment? Perhaps it is. But tell me, do you think Tzvika’s attacker worked alone? That no one saw him leave with an axe? Do you think Tzvika didn’t scream? Did no one hear him?

Years ago, a reporter complained to the father of a young terror victim. The inconsiderate and likely rather stupid reporter demanded that the father answer to the fact that Israel’s security wall (93% of which is really a fence similar to that which exists in dozens of other countries in Europe and elsewhere, including the United States) damaged the “quality of life” for Palestinians. The father of Malki Roth, who was 15 years old when she was murdered in an attack on pizzeria in Jerusalem responded that the reporter had no right to speak of the quality of life for the Palestinians to someone whose daughter had no life, whose life was stolen by Palestinian terrorists.

Will innocent workers suffer this week? Yes, they will. But they don’t suffer alone. Tzvika’s family is suffering, and they did nothing wrong. My community, my city is suffering as well. We built a beautiful city on land that was open, barren, unoccupied. The land never belonged to the Palestinians, was never part of a Palestinian state. No homes were destroyed, no one was turned into a refugee. People came and saw a beautiful mountain top – and began building a beautiful city – clean and welcoming…even to the Arab doctors and nurses who work here in our city; to the Arab shoppers who come to buy here in the very mall where Tzvika was attacked. Arabs work here, shop here, get medical treatment here and last Friday morning, attempted to murder a security guard.

The Arab who did it is now hiding in their neighborhood. When he is caught, it will likely be because our soldiers hunted him down, not because Arabs stepped forward to turn in a violent terrorist.

So for now, Israelis will do two things – we will pray and we will hunt. And the Palestinians, they can do two things too – they can sit and contemplate their lost wages…and they can consider that they have a moral obligation to turn the perpetrator over to the police. Until they do that, they should not wonder why they are barred from our city.

Let them shop in their own stores, let them build their own medical centers. Until there is a change in their culture and condemning terrorism becomes mainstream, I will do my best not to shop in stores that employee Arab workers.

If that is racist, so be it. I think hitting a man in the head with an axe, ramming a child with a car, throwing firebombs at cars and stoning buses – all because the intended victims are Jewish – is racism too…and while their racism has resulted in the deaths of more than 30 Israelis in almost 300 attacks in the last few months, my racism, if you want to call it that, will simply result in a few less shekels in their pockets.

Stop their racism. Stop their violence…and the need for my so-called racism will disappear.

Till then, I ask you to say a prayer for Tzvika bat Batya, yet another victim of a hatred so deep it poisons the souls and hearts of at least 66% of the Palestinian population. 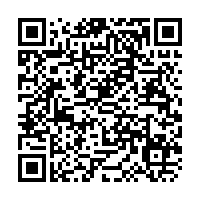