When Gush Katif was destroyed in 2005, four small Jewish communities in the northern Shomron – Homesh, Sa-Nur, Kadim, and Ganim – were demolished as well.

In the aftermath of the expulsion, a grassroots movement of former Homesh residents and activists from adjacent settlements decided to return to the Samarian mountaintop settlement, which was founded in 1978 as a Nahal military outpost – ironically by then Minister of Agriculture Ariel Sharon – and named after five towns located in the area at the time of the Mishnah.


Unlike Gush Katif, Homesh remains under IDF control because of its strategic importance as it overlooks the coastline of Israel from Haifa to Ashkelon. The leader of this movement – “Homesh First” – is Rabbi Gadi Ben Zimra, who 15 years ago formed a group called Jews Don’t Expel Jews, which called on IDF soldiers to refuse orders connected to the Disengagement. He recently spoke with The Jewish Press.

The Jewish Press: When was the first attempt made to return to Homesh?

People went back to visit almost immediately after the destruction and sometimes get arrested. On Chanukah in 2006, a few hundred people gathered there to light candles.

A few months later, a few thousand people marched to the site, largely by circumventing Arab villages. A core group of about 100 were prepared to stay. Two days later, the police showed up and tore down the shacks and tents they erected.

The first big organized effort was on Yom HaAtzma’ut in 2007 with about 20,000 people taking part in the holiday celebration. Either then or a few months later, we painted the still-standing water tower orange, the color of the struggle to save the Samarian settlements and Gush Katif.

Ever since, we have been playing cat-and-mouse with the army and police. The main seed group comprises a large group of dispossessed families who are committed to rebuilding their homes. In the meantime, the young people who learn in the Homesh Yeshiva – a group of about 40 Zionist pioneers – hold down the fort.

Rav Elishama Cohen has been the rosh yeshiva from the beginning. The yeshiva is basically maintained by the nearby Nahalat Yosef Hesder Yeshiva in Shavei Shomron, a 15-minute drive away. I, along with other rabbis who live in the Shomron, make it a point to give classes there.

What stands in the way of re-establishing the community?

The Disengagement Law bars Jews from being there. While one opinion maintains the law was passed only for the specific time surrounding the evacuation and destruction of the four settlements, the main opinion is that the Judenrein order is permanent.

In other words, according to law, our presence there is illegal. Every year, we lobby the Knesset to bring a motion to cancel the Disengagement Law, but until now, we have either lacked the majority needed or technical problems have foiled our efforts.

Gush Katif was turned over to the Arabs completely, but Homesh is still under Israeli military jurisdiction. Therefore, a Jewish civilian presence there is not such an outlandish thing. Israel wouldn’t have to reconquer any territory.

The supposed rationalization for our evacuation was that it was too dangerous for Jews to live there – when, of course, the opposite is true. Jewish settlement brings security. That was one of the sacrosanct principles in the early settlement of the country. Because the army understands this, and ultimately values our demand to return, they only show up to destroy the yeshiva study hall and tear down the tents when ordered to do so by the courts. Otherwise, they leave us alone. Even Ehud Barak, when he was minister of defense, didn’t rush to get rid of us.

When Moshe Ya’alon replaced him and came out of his leftist closest, he removed the military-controlled status of the area. Immediately, the Arabs claimed possession of it, and the Supreme Court sided with them. So, at the present, we don’t have the most solid foundation to count on. That’s why the legislative annulment of the law is so vital.

If the land is now considered owned by the Arabs, how have you been able to maintain a Jewish presence there?

You could call it a miracle. On one hand, the Arabs are not really interested in Homesh. Their efforts to establish a village there never bore fruit. The parcel of land is too isolated for them. They’d rather live closer to Shechem, Jenin, or Ramallah.

The court and the army play out their roles, each time razing the outpost and yeshiva anew, but we keep coming back. You could say they realize they are fighting a losing battle.

The Right enjoys a majority in Knesset. Why, then, has the Disengagement Law not been amended to allow Jews to return to rebuild their homes?

The answer is Bibi. If he wanted to override the law, he could. But he is the master of “stick to the status quo and don’t do anything to rock the boat.” Most members of Likud are with us, but Bibi likes to present himself as the model democrat, and as much as he complains about his unfair treatment by the Left and the leftist media, he is afraid of them, and afraid of the Supreme Court.

He wants to go down in history as a great democratic leader, not necessarily as a great Jewish one. If we had to rely upon the backing of Bibi and the Knesset Members who drive out to Homesh in an air-conditioned bus once a year to be photographed as the brave and faithful followers of Ze’ev Jabotinsky – as well-meaning as they may be – we would have had to pack up the Gemaras and shtenders of the Homesh yeshiva a long time ago.

We are still there today because of the miserut nefesh of the students and because of the unflagging dedication of the rosh yeshiva to keeping the voice of Torah echoing over the hilltops surrounding the Valley of Dotan.

The Jewish Press asked the rosh yeshiva, Rabbi Cohen, when the yeshiva last had a run-in with security forces. He replied that he was reluctant to speak because whenever news of the yeshiva appears in the media, leftist groups use the opportunity to bring more claims against it.

“Things have been quiet for over a year,” he said. “When not pressured by the appeals of leftist groups in court, the army understands the importance of our being here, and we have excellent ongoing relations with them.

“Arabs often throw stones and Molotov cocktails at our vehicles traveling from Homesh to Shavei Shomron, and they have a pastime of kindling brush fires around the yishuv, but their displays of hostility don’t weaken our resolve. Every day, the yeshiva’s presence fortifies the demand to return to Homesh and rectify the sin of expulsion.

“The yeshiva students study in difficult conditions, without regular electricity, heating, and running water, and they live in tents, but the lack of comfort doesn’t prevent them from continuing to study in depth as is customary in the yeshiva world.” 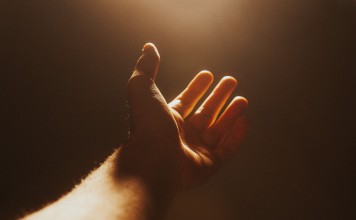 Does God Want Us to Pray or to Act? – Israel Unplugged [audio]