Across the political spectrum in Israel, everyone seems to agree that the surprise resignation of Housing Minister Yaacov Litzman last Tuesday was a dramatic but puzzling gesture. He said he resigned to protest the “irresponsible and insensitive” way the government was handling the second outbreak of corona, but it isn’t clear how his resignation will improve matters.

Just a half-year ago, the longtime Knesset Member from the Agudat Yisrael wing of United Torah Judaism Party was Israel’s Minister of Health and received much acclaim for his role in the then successful battle to halt the epidemic.


An associate of Litzman, who asked to remain anonymous, told The Jewish Press that people were perplexed because Litzman had nothing to gain by resigning. “He did it for pure ideological reasons, and that’s something rare in the world of politics,” he said. “Even people in his own party can’t figure it out.”

Litzman, 72, was born in a displaced persons camp in Germany to Holocaust survivors from Poland. When he was two years old, his family immigrated to Brooklyn. He grew up in Boro Park, receiving a yeshiva education, and at the age of 17 made aliyah and continued his Torah studies, eventually becoming very close to the Gerrer Rebbe, Rabbi Simcha Bunim Alter.

In 1999, the present Gur Rebbe, Rabbi Yaakov Aryeh Alter, asked Litzman to join Agudat Yisrael. He is known to consult with the Rebbe every day and received his permission to resign from the government.

In an interview with Yediot Achronot, Litzman said, “For the last six weeks I warned that Ronni Gamzu, who was appointed to direct the campaign against the corona epidemic, was steering the country toward a quarantine in order to make things easier for him. He picked the charedim as his whipping board because he lacks sympathy toward them.

“I don’t oppose quarantines. A shutdown worked very effectively the first time around. But to dally around, trying one unsuccessful strategy after another, and then to impose a quarantine at the time of the Jewish holidays, when it should have been done a month ago – before the infection rate spiraled out of control, like I told him back then – this can’t go by without protest.

“This was his plan from the start, not valuing the Jewish holidays and the importance of our prayers. It was more convenient for him to wait until after August and not spoil summer vacations even though numbers of the stricken continued to rise drastically.

“I can’t imagine what would have happened if there had been 5,000 infected people each day during my tenor as Minister of Health, like there is today. I would have been chased out of the medinah.”

According to our source in the Knesset, MKs in Litzman’s party tried to persuade him not to resign, maintaining that his resignation wouldn’t accomplish anything and that his plans to find a solution to the high cost of housing for young couples in Israel would be derailed by his departure. But he wouldn’t be dissuaded, saying he couldn’t sit in a government that played Russian Roulette with the lives of its citizens, put economic considerations over life and death, portrayed the charedi public in a derogatory light, and made light of high holidays.

“We have another 5,000 sick people each day because Gamzu allowed hotels to be opened throughout August, and he allowed mass political demonstrations, but synagogues he is willing to close,” Litzman complained.

The former Health Minister explained that while synagogues were indeed the main source of the rapid spread of the virus during the first wave of corona, now, because of regulations, they are statistically among the least dangerous spots.

“I am certain that the demonstrations outside the prime minister’s residence result in far more corona infections, but the numbers aren’t made public because of the efforts to oust Bibi from office.”

In response to the Corona Committee’s decision to allow demonstrations during the present quarantine, Litzman called for charedim to demonstrate on Motzei Rosh Hashanah against the holiday lockdown. Permission to hold countrywide protests were requested from the police, and hundreds of buses were ordered, but only two relatively small demonstrations were held in Jerusalem and Bnei Brak, and some believe the demonstrations were held so that chassidim could travel back home after spending Rosh Hashanah with their Rebbes (traveling is generally forbidden but allowed if one is attending a protest).

Litzman also complained about Gamzu’s move against Breslov Chassidim who wished to travel to Uman for Rosh Hashanah: “This is terribly important to them and to their beliefs. They look forward to the visit during the whole year. There are ways the potential problem could have been handled in the same manner of other travelers who arrive in Israel and enter isolation for two weeks.

“I respect Rabbi Litzman. For years we worked in harmony together. He knows that I am a fair person and that I am not anti-dati… It seems that his anger stems from some political concern.” 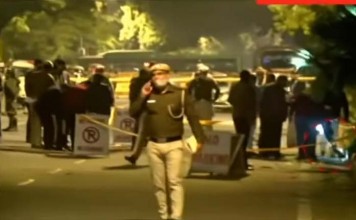