I delayed responding to this letter of Leon as, to be honest, I couldn’t find a reference to him on social media outlets which, for me, is a sign that a person doesn’t exist.  It was the spelling, which he informs me ” I have it spelled differently [Karyem] on Facebook. The Times has it how I write it in person.”

But he found me.  And now to his letter in the New York Times:

Rarely have my religious sensibilities been so offended as they were by the Israeli transportation minister’s plan to name a new train station in the Jewish Quarter, near the Western Wall, after Donald Trump. Mr. Trump has made a political career out of closing America’s doors to the widow, the orphan and the stranger. He ran a campaign vilifying religious minorities, but as president referred to those marching alongside neo-Nazis in a Charlottesville, Va., rally last summer as “very fine people.”

As a Zionist and a current Jerusalem resident, I appreciate the president’s decision to recognize Israeli sovereignty over its capital. But that does not mitigate the profanity of slapping his name on this sacred site.

The Western Wall is not a casino, and it is a desecration to associate the Temple Mount with that gilded, tacky brand that has already brought one great nation so low.


Leon is studying at a rabbinical seminary, and it is the Conservative Yeshiva in Jerusalem. He had wanted to vote for moderate progressive New York candidate for mayor Sal Albanese, who was endorsed by the…Jewish Press! I hope he is one that Daniel Gordis would not be wary of, as a rabbinical student, or a member of Conservative Judaism.

And to Leon’s letter.

First of all, congratulations on being published. I have had letters published there but my batting average is quite low.  But that is not because of my writing ability but because of my opinions.  So, Leon, take that into consideration.  If you had written in support of the naming of a train station after Trump, I’d bet you wouldn’t have gotten in (there was no pro-letter, was there?).

Third, writing, though, that you are “a current Jerusalem resident” is a bit of a sleight-of-hand. Really now. You were passing along a misrepresentation of your Jerusalem status? Are you earning a living here? Are you making Aliyah? Why not write “currently a rabbinical student on a year’s (two years?) program”?

Four, why at all should your religious sensibilities be offended?  What has a train station to do with religion?  It has to do with Trump’s declaration regarding Jerusalem:

…today, we finally acknowledge the obvious: that Jerusalem is Israel’s capital.  This is nothing more, or less, than a recognition of reality.  It is also the right thing to do.  It’s something that has to be done.

If your religious sensibilities were offended it should have been this part of his words:

a place where Jews pray at the Western Wall…In the meantime, I call on all parties to maintain the status quo at Jerusalem’s holy sites, including the Temple Mount, also known as Haram al-Sharif.

Why cannot Jews pray on the Temple Mount, which is a religious act and some think an obligation?  If you demur, I would point out that that is probably because of a political outlook. You do know that there’s a Conservative psak on the matter permitting entrance (although Reuven Hammer, supporting entrance, disagrees as to actual Jewish prayer)?  The law of Israel is on the side of those who seek freedom of religion although the High Court of Justice discriminates against Jews in this matter. Even the Jordan-Israel Peace Treaty lends support to this request (Article 9).

Fifth, is it “profanity” in naming a train station after President Trump?  Truly? Of course, if it is Trump himself that bothers you, rather than naming the station after a person, a non-Jew, then we are left with a political dispute.  But is it proper for you to disagree, in the name of “a Jerusalem resident”, “Jerusalem, Israel”, as if you are now representing 800,00+ Jerusalemites and millions of Israelis, without a smidgen of veracity or authority, to that act? That the NYTimes can wave you about, albeit in the letters section? After all, you must know how they would exploit that letter.

I cannot argue on the grounds of whether Minister Katz made to correct decision.  We do have a King George V Avenue – and he didn’t do a thing.  He happened to be king when the Balfour Declaration was made.  There is French Hill, after a Colonel French or perhaps French nuns.

But if it is the proximity to Jewish holy sites that sets you off, you do know this, yes?

R. Johanan said: Why did Omri merit sovereignty? Because he added a region to Eretz-Yisrael, as it is written, And he bought the hill Samaria of Shemer for two talents of silver, and built on the hill, and called the name of the city which he built, after the name of Shemer, owner of the hill Samaria,[I Kings 16:24]  R. Johanan said: Why did Ahab merit royalty for twenty-two years? — Because he honoured the Torah, which was given in twenty-two letters…R. Judah says: Manasheh has a portion therein…”because of Manasseh the son of Hezekiah, king of Judah” [Jeremiah 15:4], One Master  maintains, ‘Because of Manasseh’ who repented…”

So, from a religious, or theological Rabbinic standpoint, Trump should be thought of having some positive merit – at least as regards the train station being named after him: he made a major contribution to Israel’s sovereignty and the raising up of the worth of the Land of Israel, the Jewish national home; he gave honor to the Jewish connection to Israel and Jerusalem and he still can yet repent.

In other words, you not only were interfering but your religiosity, as regards your political viewpoint is questionable, at the least.  As to the matter of your Jerusalem residency, well, maybe you will stay and not go back to the lands of Dispersion and Exile but will be a good religious Jew and stay.  And use the train.

Play Your Part! – News From The Torah [audio] 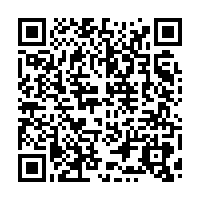