It turns out that The Atlantic magazine did a better job explaining the problem of disinformation than even those planning its recent conference on the subject held at the University of Chicago could have hoped. The magazine modestly described the event, titled “Disinformation and the Erosion of Democracy,” as “groundbreaking,” and in one sense, it was.

It was hosted by an institution that is one of the pillars of the liberal Washington establishment and had a list of speakers that was filled with well-known talking heads regularly seen on CNN and MSNBC, as well as published in outlets like The New York Times and, of course, The Atlantic. It was a nonstop compendium of conventional wisdom that put forward the notion that the problem of misleading and false information about important subjects all came from conservatives and their media outlets.


Some on the right, including former President Donald Trump, are certainly not always truthful. But there was nothing groundbreaking about a collection of liberal elites telling each other that their political foes are terrible people who believe bad things and cynically peddle lies to their ignorant followers. What was important about it was that when confronted by a student reporter with examples of how those present at the conference were themselves a primary source of misinformation, the response of the presenters did more to illustrate how the spread of such falsehoods endangers democracy than anything said or written on the subject in recent memory.

Their hypocrisy has provoked a great deal of partisan score-settling, a lot of which centers around the epic lying that was done by the legacy corporate media and their Silicon Valley allies during the last weeks of the 2020 presidential campaign. If Americans think their views about this subject should be determined solely by partisan affiliations or opinions about President Joe Biden or Trump, they’re wrong. The willingness of both the political and media divisions of the Washington establishment to spread lies also goes to the heart of the misrepresentation of other issues and stories, including those that affect both the security of the state of Israel and the spread of anti-Semitism.

The Atlantic conference became notorious because University of Chicago students were able to ask some of the speakers about examples of misinformation that they had spread themselves. One, in particular, was The Washington Post’s Anne Applebaum, a once-respectable journalist who nevertheless asserted that an October 2020 New York Post scoop with revelations about the corrupt business activities and influence peddling of Hunter Biden was Russian disinformation.

At the time, like other members of the liberal establishment that circled the wagons around the campaign of Hunter’s father, Applebaum believed that nothing was more important than defeating Trump’s bid for re-election. The scandal was ignored outside of conservative outlets. Social-media companies censored and shut down the accounts of the Post and others who sought to publicize it.

This matters because now that the details about the infamous Biden laptop and the emails on it have been belatedly declared genuine by both The New York Times and The Washington Post, and the claims about Russian involvement (that were attested to by dozens of fervently anti-Trump former intelligence officials) debunked, those who lied about it have not been held accountable. On the contrary, Applebaum’s response to the student’s question was simply to declare herself “uninterested” in something that she claims is “irrelevant.”

The rest of the conference’s speakers held to the same line with Atlantic editor Jeffrey Goldberg, even summoning up the chutzpah to declare criticism of the hypocrisy on display at the event to also be disinformation.

But to focus only on him or Applebaum is a mistake. The keynote speaker of the conference—former President Barack Obama—is an even more egregious example of double standards about misinformation. Though widely treated like a secular saint, Obama was, after all, the person who repeatedly fibbed about those who used his signature health-care plan being able to keep their doctors if they liked them. Just as important, he and the rest of his administration also continuously dissembled about the Iran nuclear deal.

His utterly false claims about the agreement preventing Iran from getting a nuclear weapon and being enforceable were dutifully reported as facts by a mainstream press that even a member of his own White House staff dismissed as a “media echo chamber.” To this day, you can read accounts of the issue in outlets like the Times and the Post without once encountering key facts about the pact allowing Iran to keep all of its advanced nuclear facilities and research, or that it actually expires by the end of this decade. The key knowledge that the deal didn’t just enrich and empower the world’s leading state sponsor of international terrorism, but that it guaranteed that Tehran would achieve its ambition to be a nuclear power is missing from Obama’s self-congratulatory comments and almost all of the media’s stories about the subject.

In his remarks at the conference, Obama defined disinformation as “a systematic effort to either promote false information, to suppress true information, for the purpose of political gain, financial gain, enhancing power, suppressing others, targeting those you don’t like.” Somehow, it never occurred to the former president that it was an apt characterization of his own approach to public policy, as well as of his key media and big tech allies.

It’s equally true of much of mainstream media coverage of Israel. Unfair and misleading reporting on the Mideast is often the product of ignorance on the part of reporters and editors. But anti-Israel bias is also motivated in large measure by intersectional ideology that holds the Jewish state to be a “privileged” oppressor, in addition to more traditional anti-Semitic tropes.

That is a good way to understand why issues like the complicated property dispute in the Nahalat Shimon or Sheikh Jarrah section of Jerusalem are portrayed in such a one-sided manner, in which Jewish rights and history are simply ignored, and a blatantly false Palestinian Arab narrative about victimhood is accepted at face value. Mainstream media outlets repeated such Palestinian propaganda about Jerusalem as a justification for Hamas firing thousands of missiles at Israel last May. That same misinformation was used by as an excuse for anti-Semitic incitement heard in Congress, as well as for violence against Jews in the streets of American as well as European cities. But apologies from media outlets on that score are just as scarce as those about silencing the Hunter Biden story.

The same is also true for mainstream media accounts of the recent series of terrorist attacks in Israel. They are invariably attributed to the lack of a Palestinian state without ever acknowledging that the Palestinians have repeatedly rejected a two-state solution, and that their claims about Jerusalem and the holy sites are blatant lies and denial of Jewish history.

The point here is that the same people who lied about Hunter Biden, and before that, about Trump colluding with Russia in the 2016 election and the Iran nuclear deal are the same “trusted” figures that many rely on to tell them the truth about the attempt to revive the pact and about the Israeli-Palestinian conflict.

No news source should be consumed uncritically. Still, if there is anything we should have learned in the last few years, it is that when legacy media use the word “misinformation,” it’s often merely shorthand for political speech they don’t like or stories that make their preferred candidates or policy prescriptions look bad. Too often, it is better applied to what the same people crying foul about the spread of misinformation are themselves reporting. That is something that is destroying the mainstream media’s credibility and eroding democracy. It’s also making the world a more dangerous place for the one Jewish state on the planet and providing fuel for a rising tide of anti-Semitism. 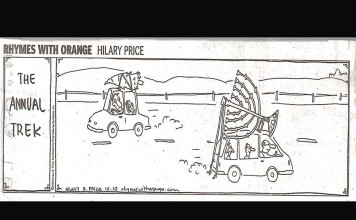