(Israel Hayom) In a tense meeting of top officials on Tuesday, Israeli Health Minister Yuli Edelstein said that unless the country’s COVID-19 numbers don’t change within the next three days, “there would be no option but to declare a full shutdown.”

At the meeting, the head of Israel’s National Security Council, Meir Ben-Shabbat, suggested that the government instate a new series of restrictions in accordance with Health Ministry recommendations to stem the second wave of coronavirus. Ben-Shabbat asked the government to close down synagogues, yeshivas, public pools, gyms, summer camps, and restaurants.

However, Edelstein said such measures would not be sufficient.

“I was among those who opposed a shutdown, but I studied the dynamic,” he said. “The recommendations the Health Ministry presents are cut back more and more until in the end even the steps we approved last week were not dramatic.”

According to Edelstein, “In the end, all we did was stop weddings and cut back on restaurant activity. With steps like these, there is no chance we’ll see a decrease in new cases, so I suggest we start talking about a full shutdown. If we don’t see a change in the numbers within three days — we’ll have to go there.”

The Health Ministry’s assessment, however, is that the number of new daily cases is unlikely to drop in next few days, and that the Cabinet will have to launch the procedure of closing down the country in its weekly Sunday meeting.

In closed-door talks, Edelstein discussed cases of coronavirus being spread at high school graduation parties (held privately) and a decision by the chairwoman of the Knesset “coronavirus Cabinet,” Knesset member Yifat Shasha-Biton, to allow pools and gyms to open, against both Health Ministry recommendations and the position of the government.

“There was always a demand that we allow graduation parties in schools, and I said I wasn’t willing to allow them. There is no scientific proof and could not have been before it happened. It was just common sense. Numbers are important, but they’re not the only thing,” said Edelstein.

Edelstein’s remarks regarding the need for a full shutdown came after Israeli Defense Minister Benny Gantz expressed opposition to the lesser restrictions proposed by Ben-Shabbat. Gantz, who is in quarantine and participated in the meeting via a video connection, said that while the government needed to take action, at this stage there was no reason to enact additional restrictions.

In response, Israeli Prime Minister Benjamin Netanyahu said he would work to persuade Gantz to agree to the new steps, since without support from the Blue and White leader the Cabinet would be unable to approve them.

‘We care about our friends who lost their jobs’

Professor Ran Balicer, head of Clalit Health Services’ innovation project, also participated in the meeting and said that the biggest challenge facing Israel’s health-care system was not a lack of equipment or hospital beds, but a shortage of personnel.

“The most important thing at this time is to add staff,” he said.

There are currently 3,023 medical workers in quarantine in Israel, including 878 nurses and 488 doctors, according to Health Ministry data.

Balicer called a full national shutdown a “doomsday weapon” and was not an action that could be implemented for a short period. He warned that it would have major ramifications not only for the economy but for public health.

Another official who took part in the meeting said there had been “agreement that we are approaching the limit of the health care system’s capacity, with hundreds of serious cases [expected] in the next few weeks.”

Despite the dire picture painted at the meeting, the director of the Sourasky Medical Center in Tel Aviv, professor Ronni Gamzu, sounded a more hopeful note, saying that Israel’s hospitals are not under threat of imminent collapse and will continue to treat everyone needing medical care.

“I want the decision-making and the backbone of Ichilov [hospital] to give decision-makers the power to handle the battle [against coronavirus] wisely, without anyone being afraid I’m going to collapse,” he told hospital workers on Tuesday.

“We care about our friends who lost their jobs, and about the economy and about businesses failing. Therefore we at Ichilov will not be the first to call for a shutdown or the first to say there is an increase in the number of patients on ventilators. All the anarchists on social media who spread this fake news should take a seat,” he continued.

On Wednesday, the hospital was slated to open a separate emergency room for COVID-19 patients, with an adjacent treatment unit with 34 beds to serve patients in non-serious condition.

Sourasky Medical Center is also working to open two COVID-19 wards and an intensive-care unit for COVID-19 patients. Two patients are currently on ventilators at the hospital. 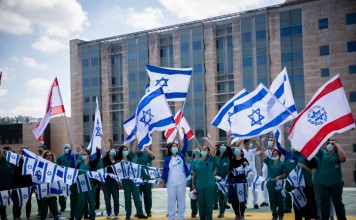