One of the most highly regarded books of the 20th century was Ernest Becker’s The Denial of Death. Winner of the 1974 Pulitzer Prize, the book is regarded as a classic for its analysis of how human beings deny their mortality.

But there is something people deny more than mortality: evil. Someone should write a book on the denial of evil; that would be much more important because while we cannot prevent death, we can prevent evil.


The most glaring example of the denial of evil is communism, an ideology that, within a period of only 60 years, created modern totalitarianism and deprived of human rights, tortured, starved, and killed more people than any other ideology in history.

Why people ignore, or even deny, communist evil is the subject of a previous column as well as a Prager University video, “Why Isn’t Communism as Hated as Nazism?” I will, therefore, not address that question here.

I will simply lay out the facts.

But before I do, I need to address another question: Why is it important that everyone know what communism did?

Second, the best way to prevent an evil from reoccurring is to confront it in all its horror. The fact that many people today, especially young people, believe communism is a viable – even morally superior – option for modern societies proves they know nothing about communism’s moral record. Therefore, they do not properly fear communism – which means this evil could happen again.

And why could it happen again? That brings us to reason number three:

The leaders of communist regimes and the vast number of people who helped those leaders torture, enslave and murder – plus the many more people who reported on their neighbors for saying something objectionable to the communists – were nearly all normal people. Of course, some were psychopaths, but most were not. Which proves that any society – including free ones – can devolve into communism or some analogous evil.

According to the authoritative The Black Book of Communism, written by six French scholars and published in the United States by Harvard University Press, the numbers of people murdered – not people killed in combat – by communist regimes were:

These numbers are quite conservative. For example, in Ukraine alone, the Soviet regime and its Ukrainian Communist Party helpers starved 5 to 6 million people to death within a two-year period. It’s almost inconceivable that only 14 to 15 million other Soviet citizens were murdered.

And, of course, these numbers do not describe the suffering endured by hundreds of millions of people who were not murdered: the systematic stripping from people the right to speak freely, to worship, to start a business, or even to travel without party permission; the absence of a non-communist judiciary or media; the near-poverty of nearly all communist countries; the imprisonment and torture of vast numbers of people; and, of course, the trauma suffered by the hundreds of millions of friends and relatives of the murdered and imprisoned.

These numbers don’t tell you about the many starving Ukrainians who ate the flesh of people, often children, sometimes including their own; or the Romanian Christians whose communist prison guards forced them to eat feces to compel them to renounce their faith; or the frozen millions in the vast Soviet Siberian prison camp system known as the Gulag Archipelago; or the Vietnamese communists’ routine practice of burying peasants alive to terrorize people into supporting the communists; or Mao Zedong’s regular use of torture to punish opponents and intimidate peasants, like leading men through the streets with rusty wires through their testicles and burning the private parts of wives of opponents with flaming wicks – Mao’s techniques to terrorize peasants into supporting the Chinese Communist Party in its early days.

Sources for the above:

I return to the theme of the denial of evil: People associate evil with darkness. But that is not accurate: It’s easy to look into the dark; it is very hard to stare into bright light.

One should therefore associate evil with extreme brightness, given that people rarely look at real evil. And those who don’t confront real evil often make up evils (such as “systemic racism,” “toxic masculinity” and “heteronormativity” in 21st-century America) that are much easier to confront.

The Book of Psalms states, “Those of you who love G-d – you are to hate evil.” In other words, you can’t love G-d if you don’t hate evil.

And if you don’t believe in God, here’s another way of putting it: “Those of you who love people – you are to hate evil.” If you don’t hate communism, you don’t care about, much less love, people. 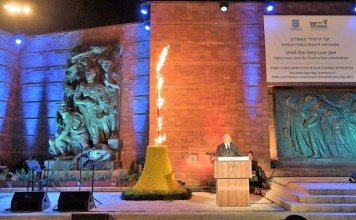