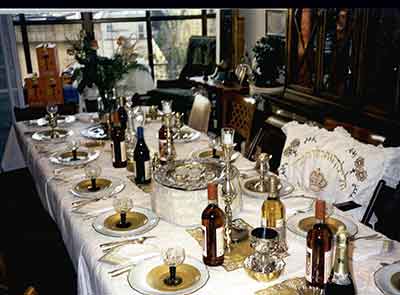 For most of us, this is the saddest Passover we can recall.


The coronavirus pandemic is unlike any previous trauma we’ve lived through. Nothing, not even the 9/11 attacks, brought our world to an extended collective halt the way the efforts to contain the disease has done.

Israelis may have endured the traumas of the “sealed rooms,” where they waited out the 1991 SCUD missile attacks from Iraq; the ongoing horror of years of the Second Intifada with its bloody suicide-bombings committed by Palestinian terrorists; and the 2014 Gaza war, in which much of the country spent weeks dashing in and out of bomb shelters to evade Hamas rockets and missiles. But in none of those cases did the country close up for business in the way that the current deadly contagion has forced it to do.

Nor has anything prepared us for the way COVID-19 has taken such a toll on the elderly. The list of those who have succumbed to it is growing. Among Jewish victims are a disproportionate number of persons who survived the Holocaust, or who have long served their communities as rabbis and scholars.

Moreover, the isolation in which most of us are now living has rendered many of us prone to depression. Some have found a situation in which they are stuck inside their dwellings with spouses and children who suddenly need to be home-schooled to be an overwhelming and nerve-wracking challenge. That is especially true when it is considered that many people have lost their livelihoods or who have reasonable fears that the aftermath of this crisis will find them far less well off as businesses cut back or fold altogether.

Rather than the prelude to Passover being a joyous time of preparation, vacations or simply an opportunity to share a festive meal with family and friends, Jews are home alone, anxious and depressed.

While we will read the Haggadah about liberation, most of us are starting to feel like we’re prisoners and in need of a miracle or two of our own in order to survive. Instead of talking about the plagues that were visited upon Egypt, we’re discussing a contemporary plague that, even if we wash our hands and practice social distancing, we can’t be sure will pass us over in the long run.

But for all of the gloom and doom that is overshadowing the holiday this year, it’s not the time for despair.

That’s not an easy thing to accept for people who have only lived in times of security and relative prosperity, as is certainly the case for Americans. We’re accustomed to think of pandemics as only the stuff of dystopian novels and movies.

Just as the seder is a historical time machine that is intended to make us understand that the Exodus from Egypt is an event in which we were personally liberated from bondage, a perusal of the history books ought to also encourage those inclined to despondency.

Throughout thousands of years of history, Jews have celebrated Passover under far worse conditions than our current situation.

The Haggadah speaks of the students of Rabbis Eliezer, Joshua, Elazar, Akiva and Tarphon spent the night of Passover in Bnei Brak and spoke of the Exodus until their students came to warn them that morning had come. You don’t have to be an expert in the history of the period in which these figures lived (second century C.E.) to know that the context of that gathering was the Hadrianic persecutions in which the Roman rulers of the land of Israel had forbidden the study of Judaism and Torah under pain of death.

Throughout the last millennium, Passover was the occasion for the spreading of blood libels against the Jews as anti-Semites circulated the lie that matzah was baked with the blood of Christian children. Even into the modern era, this was a time of fear for Jews who worried about the possibility of Easter pogroms whipped up by talk of deicide during Passion plays and sermons.

During the Holocaust, Jews conducted seders literally under the shadow of death throughout occupied Europe. In the Warsaw Ghetto, those who took part in the heroic uprising of 1943 celebrated freedom even as Jewish slaves of the Nazis were gassed and worked to death.

Even the slightest acquaintance with Jewish history—let alone a deep dive—should remind us that we live in a uniquely wonderful time in which liberation is not a dream or a metaphor, but a reality. When we conclude our seders by singing “Next year in Jerusalem,” it’s not a fantasy but something that anyone can accomplish by purchasing a plane ticket (assuming, as we must, that the world has gone back to normal in 2021).

The Jewish people gained their freedom in the Exodus, but their current situation of sovereignty and unprecedented strength in their historic homeland is a scenario that most Jews would have regarded as science fiction only a couple of generations ago.

To note all of this is not to downplay the gravity of the pandemic or the sadness that those who have lost loved ones in a time where normal funerals and shiva are impossible are experiencing. But it should remind us that we lived in a blessed moment in history for Jews in which we are not defenseless against those who “rise against us in each generation” or without the resources to help those among us who are in need as result of a public-health disaster.

This Passover is as apt a moment as can be imagined to count our manifold blessings, even if we are doing the counting in lockdown. Like far greater troubles in the past, this too, shall pass. Even at our lowest point, Jews have never despaired, but instead embraced their faith and hope in a better future. So should we.