Thousands of Israelis took to the streets last week following the shooting of a young Israeli-Ethiopian man by an off-duty police officer. More than 100 rioters were arrested, with dozens of injuries reported both among protesters and police.


The violence of the riots, along with accusations that Israel’s police and government are racist, surprised many across Israel, raising concerns that organizations with political agendas were inflaming the protests for political gain.

When Smadar Taspai, a social worker for Israeli-Ethiopian youth at risk, found out about the death of 19-year-old Solomon Tekah, she was “devastated,” but didn’t rush to judgement.

“We are waiting to see the video; we want to see what happened,” Taspai told JNS. Taspai did voice her concern, however, that stereotypes of the Ethiopian community might have contributed to the shooting, as well as to the shooting of 24-year-old Israeli-Ethiopian Yehuda Biadga by police in January.

“There is a big distinction between individual racists and systematic racism by law or de facto policy.”

According to the officer’s testimony, he was walking in Haifa’s Kiryat Haim neighborhood after dark with his wife and children when they happened upon a street fight between young Israeli-Ethiopian men. When he identified himself as a police officer and tried to break up the fight, the young men began to throw rocks at him. The officer claimed that he perceived a danger to himself and his family, and fired at the ground. The bullet ricocheted off the ground and hit Tekah in the chest.

The officer, who cannot be named due to a gag order, was arrested on suspicion of unlawful killing and later released to house arrest, under heavy guard for his own protection. Charges of manslaughter have already been dropped. Police have yet to release security camera footage of the incident, although there are rumors that such footage exists and supports the officer’s version of events.

According to Eytan Meir, director of external relations for the Israeli NGO Im Tirtzu, while this is not the first police shooting of an Israeli-Ethiopian, such shootings are “isolated incidents” rather than an indication of any systematic racism or stereotyping.

“Ethiopians are 100 percent Israelis,” he told JNS. “Israel risked its own security when it rescued Ethiopians in ‘Operation Moses’ and ‘Solomon’ in the 1980s and ’90s, respectively—that doesn’t sound like the acts of a racist country.” 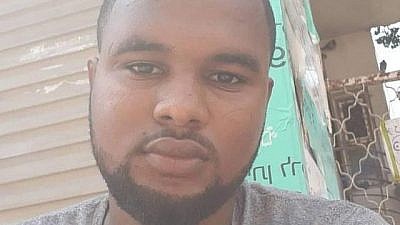 Solomon Tekah, an Ethiopian Israeli who was shot and killed by an off-duty police officer in Kiryat Haim, outside Haifa, on July 1, 2019. Credit: Courtesy.

According to Meir, what started as a natural protest at an unfortunate death was twisted into a political charade that did not represent the will of the aggrieved Ethiopian community.

“The protests started as a grassroots, spontaneous movement in the Ethiopian community,” said Meir, “but it is evident that the radical left-wing group New Israel Fund rapidly tried to hijack them.”

According to Meir, left-wing organizations sought to use the Israeli-Ethiopian protests as a vehicle to advance their agenda of dismantling Israel’s right-wing government. In particular, Meir pointed to the organization Omdim B’Yachad, or “Standing Together,” which he calls “one of the pet projects of New Israel Fund.”

According to Meir, the group claims to be “grassroots,” despite its funding sources. “As the smoke cleared,” said Meir, “it became evident that ‘Standing Together,’ which receives funding from the New Israel Fund, was heavily involved in the protests that began on Tuesday.”

Meir’s account is corroborated by a report produced by the Tazpit News Agency, according to which “Standing Together” (not to be confused with the legally registered Israeli NGO Standing Together that provides food and drink to Israeli soldiers) had a prominent presence at the demonstrations.

Israeli-Ethiopian activist Bezalel Yaakov wrote a scathing attack on his Facebook page against the left-wing leaders at the demonstrations.

“Our struggle is against policy, not against the state.”

“Unfortunately, I see the human scum of the Breaking the Silence and the New Israel Fund inciting the young people of my community against the State of Israel,” he charged. He warned his followers that the “progressives” want to “see blood in the streets more than they want to help our community. They push themselves into any legitimate struggle and turn it into a struggle against the state.”

“Our struggle is against policy and not against the state,” he said. “Yes to the protest, no to violence. I doubt that they would have shown up if there were no elections soon,” he added, referring to the Israeli general elections set for September.

Meir explains that the left-wing political entities are attempting to link the Ethiopian community in Israel with the U.S. civil-rights struggle.

Any comparisons between the circumstances of Israeli-Ethiopians and those of African-Americans in the United States, he said, is “absurd.”

“There is no semblance of a parallel; it’s comparing apples and oranges. There is a big distinction between individual racists and systematic racism by law or de facto policy,” said Meir.

At the same time, while stating that Israel is certainly not a racist country he noted that there are certainly individual racists in Israel, just as there are in every country.

“Some people are racist and we should denounce them,” said Meir. “Every citizen in Israel should be treated equally.”

Similarly, Taspai said that while she sees some similarities, the comparison is upsetting.

“I don’t like it when people compare the Ethiopian story to the United States,” she said. “There’s something unique here and there. Here, we are all Jewish and supposed to be equal, but there, there was slavery.” 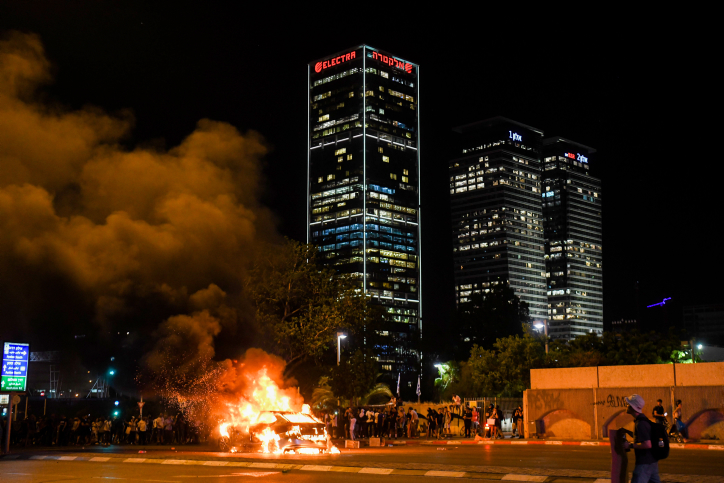 A car is lit on fire in Tel Aviv during a protest over the June 30 shooting death of 19-year-old Ethiopian Solomon Tekah in Kiryat Haim, July 2, 2019. Photo by Flash90.

‘You can make it in Israeli society’

Taspai, who immigrated to Israel with her family from Ethiopia in 1983, one year before “Operation Moses,” said that the generation she works with is very different from her own or that of her parents. The Ethiopians of the past were known to be modest and docile, she said, while the generations born in Israel are “stronger and more determined” and do not stay quiet when they see something that needs to be changed.

“This is the country we dreamed of and adore, but sometimes we feel people are trying to push us and we ask, ‘Why?’ I am trying to be objective, not to be too involved, but [the question remains],” she said.

Taspai’s brother is a police officer, and she noted that there are many good officers among the Israel Police force. Previous generations of Israeli-Ethiopians, she said, have a great respect for the police and vice versa, both back in Ethiopia and in Israel, but this trust is now being challenged.

While Taspai estimates that a staggering 70 percent of Israeli Border Police are of Ethiopian descent, “The teens have a lot of criticism about the police and Israeli government.”

According to Taspai, the teens “want justice and to feel equal. They were born in Israel and grew up as Israelis with strong Jewish identities, but still feel discriminated against whether in school, on the street or by the police.”

While there are various initiatives seeking to better relations between members of the police and the Ethiopian community, said Taspai, “they’re not really working.”

She said “we need to put more effort into education from a young age and ensure there are Ethiopians in every sector of society, including educators, so people see them and know them, preventing stereotypes rather than only seeing them in the army and news.”

While she understands the frustrations of young Israeli-Ethiopians, she said, she tells those she works with that “you don’t solve violence with violence,” urging them to think of more effective ways to fight discrimination.

“Nobody is waking up saying, ‘We’re going to shoot Ethiopians.’ You can’t take it personally,” she advises her youth. “Yes, there is a problem, but you can still make it in Israeli society. You can’t think that you don’t have the same opportunities; you must have hope and dreams. There are a lot of successful stories of Ethiopian educators, doctors, lawyers—we have
everything.”

“You have to have trust in the Israeli state,” she urged. 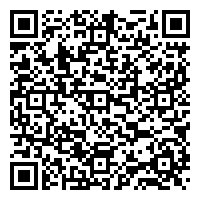