If the Israel-Palestinian situation were to be considered to be like a hand grenade, the “international community” has just pulled the pin and thrown it away. Or, to put it another way, it has just taken a sledgehammer to two decades of fragile diplomacy and smashed all the diplomatic options to bits.


Even though almost nobody in the West recognizes it yet absolutely everything about the Israel-Palestinian conflict has changed. Or at least everything from the material realities which leaves Israel still stronger, in possession of part of Judea and Samaria and with the ability to act as needed to defend its security.

But any talk of Israel-Palestinian negotiations, peace process activity, compromise diplomacy, and all that stuff is meaningless now and here’s why:

The U.N. General Assembly made the Palestinian Authority (PA)-ruled entity a non-member state. Many in the West rationalized providing supporting votes or abstentions by saying this would do no harm and make Palestinians feel good.

While the United States voted against the resolution, the Obama Administration wasted the better part of two years not battling it, certainly not fighting against it effectively, and absolutely failing to convince European allies who supposedly love Obama to vote against it.

Those of us who opposed this change explained that it means destruction of the 1993 Oslo agreement and the “peace process,” as moribund as it was, by handing the Palestinian Authority (at least on paper) everything it wanted without a single compromise on its part, not even living up to previous commitments.

Ironically, the more the P.A. gets in theory the less it gains in practice. Only by making a deal with Israel can the P.A. get full possession of territory on the West Bank and define such a state’s borders and security arrangements. By refusing to negotiate with Israel or compromise, the P.A. guarantees failure.

Moreover, the P.A. has shown itself unable to get a deal with Hamas, which governs the Gaza Strip, without which a single Palestinian entity, much less a state, does not exist. Historically, international law has required that a state must have a single government in control of a clearly defined territory. That situation does not exist regarding any Palestinian state.

Even more serious, however, was the fact that the U.N. General Assembly action took the extraordinary step of blowing up an internationally recognized and sponsored series of agreements that only an Israel-Palestinian peace accord would determine the outcome.

In addition, we pointed out that the management of this whole enterprise was feeding the P.A.’s notion that the “international community” was recognizing its claim to every inch of Judea and Samaria, the Gaza Strip, and east Jerusalem. And since they were entitled to all of this land, they didn’t have to compromise on anything and didn’t need to reach any agreement with Israel. This assumption, of course, guarantees there won’t be any negotiated peace agreement at all.

In a May 2011 New York Times op-ed piece, P.A. leader Mahmoud Abbas laid out precisely what he has now done: “Palestine’s admission to the United Nations would pave the way for the internationalization of the conflict as a legal matter, not only a political one. It would also pave the way for us to pursue claims against Israel at the United Nations, human rights treaty bodies and the International Court of Justice.” Palestine was not admitted as a member but the recognition of it as a state was the important part.

In other words, the U.N. General Assembly’s action was the single most effective sabotage to a two-state solution since the Palestine Arab leadership’s rejection of a two-state solution based on partition in 1947. Much of the media, “experts,” and Western politicians will no doubt blame Israel and especially the Netanyahu government for the absence of a diplomatic miracle. In fact, though, Israel’s stances have now been rendered irrelevant in this regard.

During the next four years there will not be any serious Israel-Palestinian peace negotiations and it won’t be Israel’f fault. In real terms, whatever they say publicly, the U.S. and European governments seem to have recognized this fact; President Barack Obama clearly understands it, too. What they fail to understand is their own responsibility for this outcome. 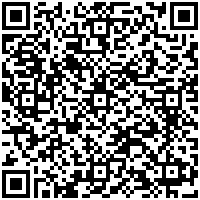