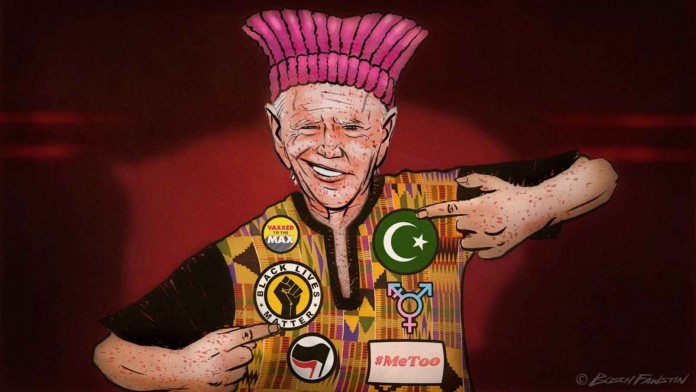 Identity politics is best understood as a moral caste system. Buying into variants such as critical race theory means accepting that your actions matter less than your race, gender or sexuality. The promised liberation of identity politics imposes the collectivist understanding that nothing you do truly matters outside the constraints of your caste. Who you were born is who you are.

It’s difficult to think of a dogma that is more at odds with the philosophical worldview of the Founding Fathers or the Judeo-Christian theology of America. Identity politics violates the political and religious foundations of this country. These ideological assaults are bolstered by the conviction that personal redemption through economic strivings or repentance are conspiracies to fool people into believing that change comes through individualism rather than collectivism.

And yet the damage to the national fabric is almost secondary to the moral damage that identity politics inflicts on individuals. The Judeo-Christian moral revolutions came from the conviction that each individual had free will, personal responsibility and a relationship with his creator. Dispense with individual free will and individual conscience goes with it. In its place are the rioting mobs of Black Lives Matter for whom, like the Nazis, morality is group warfare. The only individual actions that matter are membership in a group whose moral nature is innately coded at birth. To be white is to be a sinner and to be black is to be sinned against.

The essence of identity politics is its conviction that individuals can have moral standing only in relation to their group. Understanding morality without awareness of group membership is the equivalent of atheism for wokes. That is why they are unable to grasp literature whose protagonists lack clear racial or sexual markers. Diversity markers in movies, television and novels are not just elements of political correctness, they are vitally necessary signifiers for a woke population that can only see moral drama through the lens of identity politics.

Identity politics tricks people into believing that nothing they do can influence the moral balance nearly as much as the group into which they were born or were selected. The moral relationship of a murderer and murder victim is secondary to the groups that they belong to. This is not the exciting new idea that wokes think that it is. It’s the default state of affairs in most of the world where caste, tribe, clan and family relationships are primary and moral choices are secondary.

A justice system responding to a murder in most of the non-western world is primarily aware of the groups that the victim and the perpetrator belonged to. Morality is not universal, but caste-based. Murder is more wrong in some intersectional power relationships than others. And in some, as with the victims of honor killings, it’s downright understandable. Asking, “Who is the victim” is not an attempt to solve a crime, but to measure morality through social status.

Cancel culture is not an accidental byproduct of identity politics: it is identity politics. It attacks membership in a group, that of peers, employees, family and friends, students and the larger culture, reinforcing the message that group membership is conditional on abandoning individual views. The members of the lynch mob, individually weak, show the supremacy of collectivism by targeting individuals as components of a mob. The tactics of cancel culture also relay its fundamental message that group membership is superior to individuality. And that those individuals who resist are easily crushed by a mobilized group.

The act of cancelation is a microcosm of identity politics. The group brutalization escalates from online harassment to mob violence, from ritual humiliation to violent assaults and murder. From anonymous trolls to antifa assaults, the virtual scales to real life. Online hate is a training ground for riots, terrorism and a civil war. What makes all of it possible is the conscious abandonment of individual morality for identity politics. The moral code of identity politics is that there are no universal moral codes that apply equally, only the political death struggle of “us” and “them”.

Woke syntax moralizes its amorality by depicting it as “punching up” or “punching down”. Intersectionality pretends to draw moral lines by defining who is and isn’t fair game based on group membership. What the higher moral logic of identity politics embraced by leftist intellectual elites really means is Shiites against Sunnis, one African tribe against another, a perpetual war of identity until extinction.

Moral exhaustion is part of the appeal of identity politics. The liberation that collectivist movements offer is the freedom from personal responsibility and conscience. In all its tribal ugliness, identity politics offers simple answers with no need for soul searching. To accept critical race theory is to know whether you are good or evil through the simple expedient of glancing in the mirror. You may be on one or the other, but you had little to do with it.

The moral demands of modernity are more exhausting than ever and without religion, the upper middle class westerner is less able to navigate the ethical ambiguities of a changing world. Like all totalitarianism, identity politics offers simple solutions to unsolvable problems. Coming after the wreckage of liberalism, globalism, multiculturalism and all the failed isms of the last century, it offers a return to savagery, the simplicity of the hatred of the other, wrapped in sophistry.

Identity politics is a rebellion against every civilizational development for thousands of years. That is the source of its appeal. This is the grim genocidal vision for which liberals have exchanged the Enlightenment. That is what they want to indoctrinate at every level from kindergarten to the corporate workplace. That is what they want for America.