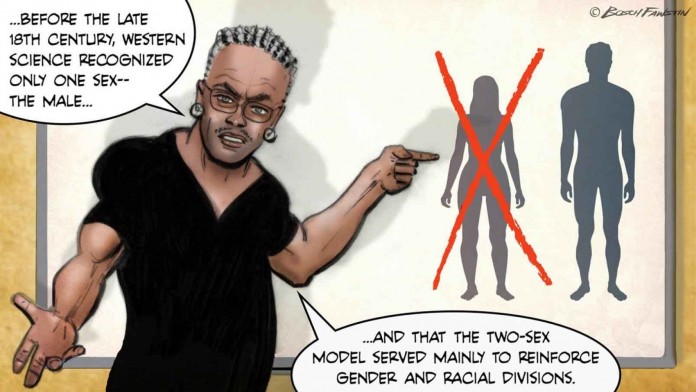 Social media users ridiculed a recent Scientific Americandocumentary claiming that, “before the late 18th century, Western science recognized only one sex—the male” and that “the two-sex model served mainly to reinforce gender and racial divisions.”

The contention that women didn’t exist until the 18th century is absurd and is also being taught in classrooms at both the most advanced and the most basic levels. Like critical race theory, it’s based on academic works that steadily gained influence during the last three decades while few outside academia noticed the normalization of their presence.

Now at Johns Hopkins you can find a class on “The Gender Binary and American Empire” which contends that “the sex and gender binary was produced out of colonialism and statecraft in Americas and particularly through US imperialism” while PBS tells school students that “on nearly every continent, and for all of recorded history, thriving cultures have recognized, revered, and integrated more than two genders.”

This historical revisionism isn’t isolated to the classroom, textbooks or social media. Anthropologists are being pressured to stop identifying bodies in tombs as male or female. Historical figures like Joan of Arc are being posthumously redefined as transgender. The overriding goal is to reimagine a history in which men and women didn’t exist until being “invented” by imperialistic westerners to repress the non-westerners they were colonizing.

Transgender historical revisionism is a subset of intersectional revisionist history that reverses the traditional western concept of the enlightenment as the coming of a new dark age that spawned capitalism, colonialism and every possible form of bigotry. Much as the 1619 Project falsely claims that America was not only built on racism, but actually invented it to prop up colonialism, other intersectional revisionist histories make similar claims for the nuclear family, the middle class, free enterprise, men and women and every other norm they want to destroy.

Intersectional revisionist history emerged from the post-colonial boom in academia. Unlike traditional Marxism, which presupposed the superiority of the western world and the inevitable progress of human civilization, post-colonial identity politics are a form of Marxism that are hostile to western civilization and the very idea of progress. Embraced by Islamists, black nationalists, La Raza academics, feminists and sexual activists, it’s aimed at not only rolling back the western project, but inventing imaginary African, Islamic and American Indian utopias that were free of the evils of capitalism, racism, the nuclear family, as well as men and women..

The growth of these fantasy ‘wakandas’ across academia has been accompanied by cancel culture and a complete collapse of even the most elementary standards. At the ground level, history has already been rewritten to not only denounce Columbus, Washington and Lincoln as racist colonialist villains, but to accuse them of destroying utopias that were free of their sins, and to make the rebuilding of dark age societies the purpose of “decolonizing” the West.

The worst fringe racial and sexual nuttery of the 70s has long since become academic doctrine.

The dark enlightenment doctrine (this term is used similarly by some on the alt-right) was embraced by black separatists who wanted their own apartheid state, Islamists and their fellow travelers like Edward Said because it paved the way for the resurrection of a caliphate, Latino nationalists because of its inherent anti-Americanism and sexual activists because it allowed them to pretend that basic human norms didn’t exist. Transgender revisionist history is the modern equivalent of 70s feminists inventing past matriarchies that never actually existed.

Sexual revisonist history colonizes and distorts other cultures to promote a political agenda. For example, transgender activists claim that there were six or even eight genders in Judaism. There were and are only two genders. “Male and female he created them” (Genesis 1:27). Much like modern medical science, Jewish legal tradition dealt with biological and developmental abnormalities like an androginus (from the Greek androgynous) or a saris (a enunch who had suffered castration) that were not new genders, but medical problems.

The non-western sexual and feminist utopias never existed and the racial ones were nightmares. These were societies where cutting off the noses of women was routine, where slavery was the norm and anyone different was exterminated. Diversity, the concept that has been used to club western civilization to death, did not exist except under the conditions of empire or as a temporary side effect of trade. It only truly existed in America.

Marxism hoped to harness identity politics to topple western power blocs and remake them in its image Instead Marxism was reduced to a coalition between Third World nationalists and sexual activists who embraced the original Nazi ethos of the Dark Enlightenment that called for a rebirth of humanity through the civilizational destruction of the Enlightenment and much of Christianity. That is why Enlightenment thinkers remain leading targets of academic wokes.

Intersectional revisionist history is an argument for a world in which the West never existed. The earliest socialist texts to the latest tweets by Bernie Sanders and AOC make their argument against America and the West by envisioning fictional utopias of the future. But intersectional revisionist history is no longer looking to an imaginary future, but to the past. Like most racialists and historical losers, it fantasizes about reclaiming a lost world that never existed.

Nicole Hannah-Jones, the black nationalist behind the 1619 Project, once wrote a letter claiming that “Africans had been to the Americas long before Columbus or any Europeans. The difference is that Africans had the decency and respect for human life to learn from the Native Americans and trade technology with them.” To her this is no doubt as real as the 1619 Project. And academia is learning that it can’t have anti-American historical revisionism without the identity politics historical revisionism and its phantom utopias supposedly destroyed by America

Intersectional revisionist history reconciles these two narratives by depicting the entire planet as a kind of idealized CHAZ of fluid genders and polyamorous matriarchies, free of racism or the concept of ownership until the European ships arrived to destroy these dreamworlds. Every social norm, including even the existence of men and women, is revealed by these conspiracy theories to have been invented by European colonialism to repress the primordial utopias.

Academia has come to be driven by this pseudo-theological search for a lost Eden that is composed in equal parts of denouncing every element of western society and imagining non-western societies that are the very opposite. Each phase of intersectional revisionist history asks people to accept increasingly implausible things. The demands of transgender revisionist history are some of the most ridiculous, but they are being accepted wholesale nonetheless.

Transgender revisionist history’s modest proposal is to disgender most of human history to ‘decolonize’ it. And that requires pretending that men and women didn’t exist until the 18th century, and denouncing the “invention of women” as a conspiracy by western colonialism against non-western societies.

Revisionist history, like all fantasy, reverses reality, victims become perpetrators, norms turn into aberrations, the rare is deemed commonplace and sin is praised as virtue. It looks to redeem the past by fictionalizing it to the detriment of the present. Marxism postured as progressive and yet when given the opportunity, its societies were always reactionary feudal dictatorships.

Modern Marxism has stopped even pretending that it is anything other than reactionary, longing for an idealized racial or sexual past, not the future. Like the Islamists it’s allied with, it is no longer destroying the western world to build a better future, but to reinvent a dark past. 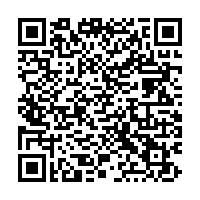