Rabbi Yoel Schwartz, one of the founders of the Nachal Haredi battalion, which incorporates Haredim into the IDF in a special unit, passed away on Thursday at age 82. He will be buried on the Mount of Olives.

Rabbi Schwartz studied at Ponevezh Yeshiva in Bnei Brak and Mir Yeshiva in Jerusalem. He served as the mashgiach ruchani of Yeshivas Itri and of the Nahal Charedi religious army program which he helped found in the 90’s. He was the author of some 200 books, and was involved in the attempts to revive the Sanhedrin. He was also involved in “Bnei Noach,” working with non-Jews to keep the 7 mitzvot (commandments) given to Noach and the world.

Rabbi Schwartz was awarded the Moskowitz prize for Zionism. 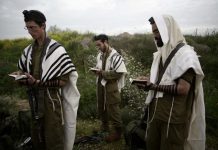 A Sneak Peak into a Haredi Army Unit