The lawmakers, all Republicans, also visited Hebron and other areas in Judea and Samaria, in a visit that was kept publicly quiet until it was over. As Chaim Silberstein, head of Im Eshkachech, later said, “These representatives do not need to be lectured about being pro-Israel, but they did request tools to help them defend a united Jerusalem in Congress and in the American public.”


The four were Reps. Doug Lamborn of Colorado, co-chair of the Republican Israel Caucus; Louie Gohmert of Texas; John Fleming of Louisiana; and Randy Forbes of Virginia.

“Jerusalem must remain the undivided and eternal capital of the State of Israel,” Lamborn declared. Gohmert went even further, asserting that the “Land of Israel and Jerusalem were given by God to the Jewish People, and giving them up would be both immoral and nonsensical.”

Their Jerusalem tour began at Ammunition Hill, site of a Six-Day War battle that helped secure Jerusalem for Israel. The multimedia presentation put the cease-fire lines in military, geographic and historic perspective.

Next on the itinerary was the gravesite of Shmuel HaNavi (Nebi Samuel). Silberstein provided the visitors with maps and aerial photos to give them a “solid understanding of the geographic and legal realities of eastern Jerusalem.”

The high altitude site of Nebi Samuel, used by Jordan to attack Israeli positions in the 1948 and 1967 wars, provided the congressmen with “a commanding view of the security fence, the growing Arab population, and the chokehold that Jews in the capital would suffer if the city were to be divided,” said Silberstein.

From Nebi Samuel they traveled farther north, taking clear note of the high standard of living in Arab neighborhoods. “When I mentioned polls showing that the majority of eastern Jerusalem Arabs want to continue living under Israeli rule rather than in a Palestinian Authority state,” said Silberstein, “they said they could understand why.”

They then proceeded to the site of the biblical Givat Sha’ul. In 1967, the late King Hussein of Jordan was serenely building himself a summer palace on this scenic hilltop when his workers were abruptly interrupted by the Six-Day War, during which Israel liberated the area in mid-construction. Ever since, the partially completed and instantly recognizable skeleton of the almost-palace has stood untouched on the hill.

Originally a lone structure amid pristine mountaintops, it now provides a breathtaking view of the many surrounding Jewish and Arab neighborhoods – and, noted Silberstein, an appropriate background for Im Eshkachech’s presentation on the strategic and security ramifications of dividing Jerusalem.

The Americans were also treated to a panoramic view of Jerusalem from the Mt. of Olives, overlooking the Old City and the Temple Mount. 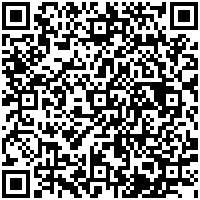