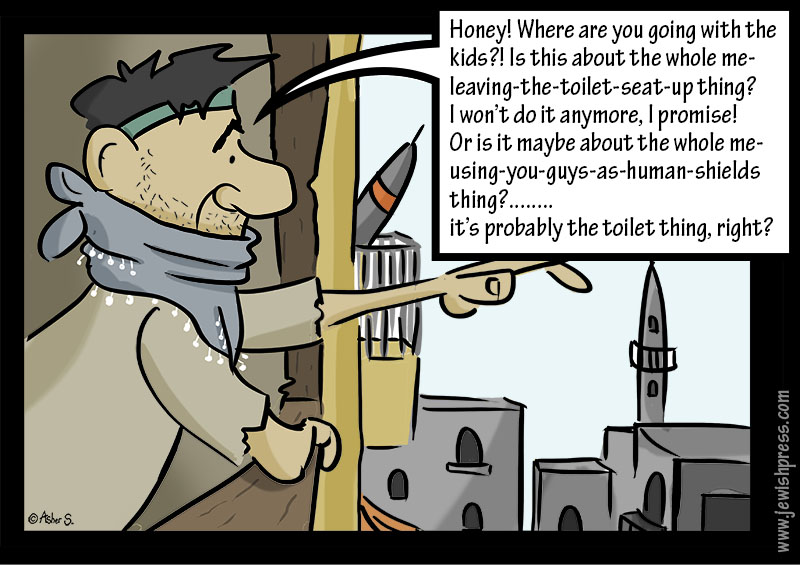 While many in the West denounced Israel for its military strikes in the Gaza Strip over the past week, prominent Arab writers and political analysts held the Iranian-backed Hamas responsible for the violence and bloodshed.

These Arabs evidently understand what the anti-Israel activists around the world fail to see — that Hamas has brought nothing but disaster and despair to the two million Palestinians living under its rule in the Gaza Strip.


These Arabs also seem to understand that Israel is not waging war on the Palestinians, but against an Islamist terrorist group whose charter openly calls for jihad (holy war) and the elimination of Israel.

These Arabs can also see that if one cares about the Palestinians, why would one want them ruled by terrorists who place weapons caches near hospitals and schools, and use children as human shields?

Those who are condemning Israel for defending itself against the rocket and missile attacks need to see what article 15 of the Hamas charter says:

“The day the enemies usurp part of Muslim land, Jihad becomes the individual duty of every Muslim. In the face of the Jews’ usurpation, it is compulsory that the banner of Jihad be raised.”

The message that the Arab writers and political analysts are trying to send to those Westerners who consider themselves “pro-Palestinian” is: Hamas serves as a pawn in the hands of Iran and the Muslim Brotherhood in the fight against Israel and the West.

There is another message that the Arabs are seeking to send to those in the West who are demonstrating against Israel: Criticism of Hamas does not make you anti-Palestinian; on the contrary, holding Hamas responsible for the violence and bloodletting actually serves the interests of the Palestinians.

How ironic that Arab Muslims are lashing out at Hamas while Israel-haters around the world see no evil in its actions, including the indiscriminate firing of thousands of rockets and missiles into Israel.

“Real sympathy with the Palestinian people means searching for solutions for an actual and practical peace that guarantees their safety, security, and development,” commented Saudi writer and researcher Abdulah Bin Binjad Al Otaibi. “The solutions should also stop those [Hamas] who are ready to burn Palestine and its people.”

The Hamas terrorist group, he said, “was well prepared for this war by building trenches in which its members can take shelter, while innocent Palestinians were being killed. Hamas likes to play the role of victim and kill Palestinians to win Arab, Islamic and international sympathy.”

Denouncing Hamas for persecuting the Palestinians, Al Otaibi noted that the terrorist group carried out a bloody coup in 2007 against the Palestinian Authority in the Gaza Strip.

“Some ask, is this the right time to present the crimes of Hamas,” he added.

“This is precisely the best time to do so. The reader can conduct a quick search on the Internet to learn about the crimes that Hamas has committed against the Palestinians. Hamas has the right to destroy its homes with its own hands, but it has no right to destroy the homes of Palestinians and underestimate their blood and the blood of their children.”

Another Saudi writer, Mishary Dhayidi, warned that Hamas was aligned with Iran and the enemies of the Arabs.

Dhayidi pointed out that Hamas has been associated with the Houthi militia in Yemen, Hezbollah, Egyptian terrorists and Qasem Soleimani, the commander of Iran’s Quds Force who was killed last year in a US targeted drone attack near Baghdad International Airport in Iraq.

“Abbas wants to cover up for this decision to postpone the Palestinian elections so that he can continue to sit on the presidential chair at the expense of Palestinian blood,” Wuldalsalek remarked. “Hamas aspires to increase its popularity and drain the pockets of those who see it as a resistance movement by launching futile missiles that harm it more than doing any good.”

He accused Iran and Turkish President Recep Tayyip Erdogan of “exploiting Palestinian blood without any shame or conscience.”

“A few months ago, we were very happy with the signing of the Abraham Peace Accords [with Israel], which the people rely on to create peace that benefits everyone politically, economically and socially,” Wuldalsalek wrote. “But the extremists are working to kill this dream. It is sad that some are working hard for peace, while others are working hard for the sake of war and the continuation of the conflict.”

Egyptian writer Khaled al-Berry advised that “criticism of Hamas is in the interest of the Palestinians, now and tomorrow.”

Criticism of Hamas, he said, “Is a message of awareness, caution, and a warning about the consequences of its organizational and regional ties.”

Former Jordanian Minister of Information Saleh Al-Gholab said that Hamas should choose between being a Palestinian group or “a Muslim Brotherhood movement belonging to Iran.” Al-Gholab pointed out that in 2007 Hamas launched a bloody coup against the Palestinian Authority and threw members of its rivals in Fatah from rooftops.

“Hamas did not use the children of Ismail Haniyeh, Khaled Mashaal or Ali Khamenei as human shields. Hamas used the Palestinian people [as human shields]. Shame on you to defend Hamas. This is a major betrayal!”

Such critiques of Hamas and other Iranian-backed terrorist groups are relatively new in the Arab world. The criticism shows that a growing number of Arabs are fed up with the continuous efforts of Iran to destabilize the Arab countries with the help of the mullahs’ proxies in the Middle East, including Hamas.

Inexplicably, these Arab voices are generally ignored by the international community and the mainstream media in the West. Those who are demonstrating against Israel and Jews in the US, Canada and some European countries might want to tune in to what Arabs themselves are saying about Hamas, Iran, Hezbollah and other terrorist groups. If they bothered to listen, they would understand that as far as many Arabs are concerned, the real threat to the future of Arab and Muslim children is coming from Iran and Islamic terrorist groups, and not from Israel.