The PA and Hamas do not like to talk about the Palestinians targeted by their security forces in the West Bank and Gaza Strip. Why? Most of these Palestinians are arrested for their political affiliation and opinions, and not for violating the law or involvement in violence and terrorism.

Palestinian human rights organization and activists describe the detention of these Palestinians as “political arrests.” That means that the Palestinians are being arrested by the PA and Hamas only for “politically motivated” reasons.

A recent report by the Human Rights Institutions Association (HRIA) revealed that in the past three months, the PA security forces have stepped up politically motivated arrests in the West Bank. The group noted that the arrests came despite PA President Mahmoud Abbas’s initiative to hold new Palestinian general elections.

“Most of the political arrests that took place in the last three months of 2019 targeted political activists who participated in public political activities, including demonstrations,” HRIA said in its report.

“Many arrests took place without a judicial warrant, which constitutes a blatant violation of constitutional and legal rights. According to information gathered by the researchers of HRIA, the Palestinian Authority security services arrested and summoned for interrogation 297 Palestinians during the last three months of 2019 because of their political affiliation and political activities. Forty-six political detainees are still being held without charge in Palestinian Authority prisons.”

HRIA also revealed that many Palestinians detained by the PA security services have been subjected to violations of their rights. The group found that some of the detainees have been brought before Palestinian military courts although they are civilians. In addition, many Palestinian university students have been arrested by the PA security forces because of their activities on campus, including expressing their opinion on social media and organizing political events. A number of detainees have been subjected to torture, physical violence and other forms of humiliation by their interrogators, HRIA said.

“HRIA calls on the Palestinian government and security forces in the West Bank to halt political arrests and immediately release all political detainees,” the group added. “We also call for ending all restrictions on public freedoms and allow political activities and freedom of expression.”

Palestinian human rights activists revealed that during 2019, three detainees died in PA prisons. Two of the detainees died just in December 2019. The last detainee who died was serving a 10-year sentence on charges of selling land to Israeli Jews. His identity was not revealed by the PA security forces. A spokesman for the PA Police only said that the deceased man was arrested in 2012 and he died two weeks after being transferred from prison to a hospital in the West Bank city of Ramallah.

In early December, the PA announced that a 60-year-old detainee died after being transferred to hospital from a Palestinian prison in the West Bank city of Jericho. The man’s identity was not revealed, and it remains unclear why he was being held by the PA security forces in the first place.

In April 2019, another Palestinian man, Mahmoud Al-Hamalawi, died in a PA prison in Ramallah. His family said that he was abducted from his home by gunmen who handed him over to the PA security forces. The PA later called the family and informed them that the 32-year-old Al-Hamalawi who had been severely tortured by his kidnappers, was pronounced dead after being taken to hospital.

On January 11, the families of political detainees arrested by the PA staged a protest in Ramallah to demand the release of their sons. The families urged human rights organizations to pressure the PA to halt its security crackdown on political activists in the West Bank and said that some of the detainees were being subjected to torture in PA prisons.

Similarly, the international community seems unmoved by the continued Hamas crackdown on political activists in the Gaza Strip. On January 12, Hamas security forces arrested Eyad Nasr, a senior official with PA President Mahmoud Abbas’s ruling Fatah faction. No reason was even given for his arrest

Like the PA, Hamas has always displayed intolerance towards political rivals or anyone who dares to voice criticism of Palestinian leaders in the West Bank and Gaza Strip. Recently, Hamas arrested one of its own policemen, Hussein Qatoush, after he posted a video on Facebook complaining about the economic crisis in the Hamas-ruled Gaza Strip. Hamas has also gained notoriety for arresting Palestinian comedians who poke fun at leaders or Arab states that support Hamas, including Qatar. Two of the comedians arrested by Hamas in 2019 are Ali Nissman and Hussam Khalaf.

The European Union is said to be pressuring the Palestinians to hold long overdue presidential and parliamentary elections. It is not clear, however, how the Palestinians would hold new elections at a time when the PA and Hamas are busy in the West Bank and Gaza Strip locking up their political opponents.

The “political arrests” are yet another indication of human rights violations perpetrated by Palestinian leaders against their own people. Inexplicably, though, the EU appears unfazed by them. Instead of pressuring the PA and Hamas to hold elections — that in any case neither side seeks, as it would almost certainly hand a further victory to the terrorist group Hamas — it would be better for the EU to encourage Palestinian leaders, as a first step towards holding free elections, at least to cease and desist making political arrests. Failing to hold Palestinian leaders accountable for their human rights violations casts serious doubt on the EU’s desire to hold new elections in the West Bank and Gaza Strip, and their deeper, seemingly malign intentions for the region as a whole. 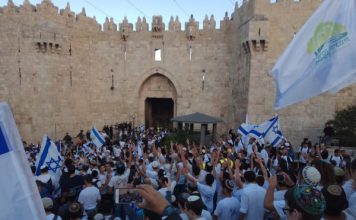