In the past I have written about global anarchy and its strategic implications for Israel. Today, I want to assess something far more specific and ominous: global chaotic disintegration. Such an unraveling is already an evident fact of life in several different parts of the world. Moreover, substantial and sudden extensions of this perilous condition to other far-flung parts of our planet are both plausible and probable.


There are foreseeable interactions between individual catastrophic harms, so-called synergies, that could make the existential risks of global chaos even more pressing.

From the specific standpoint of Israel, the dangers are both particular and unique. Facing not only a growing nuclear threat from Iran, but also the more or less simultaneous appearance of Palestine, the Jewish State could find itself engulfed in mass-casualty terrorism, and/or in unconventional war. As to any long-promised security assistance from the United States, President Obama could offer little more than compassionate American help in burying the myriad dead.

The probability of genuine Middle East chaos could be enlarged by conceivable instances of enemy irrationality. If Israel should begin to face a Jihadi adversary that values certain presumed religious expectations more highly than even its own physical survival, Israel’s deterrent could be immobilized. This could mean a heightened threat of nuclear and/or biological war. As I have written here before, it might also place Israel in the recognizable cross hairs of mass-destruction terrorism.

“The blood-dimmed tide is loosed,” says the poet W.B. Yeats, “and everywhere the ceremony of innocence is drowned.” Now assembled in almost two hundred armed tribal camps properly called nation-states, all peoples coexist uneasily and insecurely on a plainly anarchic planet. The core origins of this decentralized world lie in the Peace of Westphalia (1648), which put a codified end to the Thirty Years War. But now, anarchy is far more portentous than ever before, owing to the unprecedented fusion of chaos with authentically apocalyptic weaponry.

In time, even with the United Nations and its associated “international community,” there will be no safety in arms, no rescues from political authority, and no reassuring answers from science. New wars may rage until every flower of culture is trampled, and until all things human are leveled in a vast and primal disorder.

In history and world politics, anarchy is a very old story. Chaos, however, is not. There is a distinctly meaningful difference.

Chaos and anarchy actually represent opposite end points of the same continuum.Perversely, mere anarchy, or the absence of central world authority, is “normal.” Chaos, however, is sui generis. It is thoroughly “abnormal.”

Since the seventeenth century, our anarchic world is best described as a system. What happens in any one part of this world, therefore, necessarily affects what happens in some or all of the other parts. When a deterioration is marked, and begins to spread from one nation to another, the corrosive effects can undermine regional and international stability. When this deterioration is rapid and catastrophic, as it would be following the start of any unconventional war and/or unconventional terrorism, the corollary effects would be correspondingly immediate and overwhelming. These effects would be chaotic.

Aware that even an incremental collapse of remaining world authority structures will impact its friends as well as its enemies, leaders of the Jewish State will need to advance certain precise and plausible premonitions of collapse in order to chart durable paths to survival. Such indispensable considerations are likely not yet underway. Instead, the only paths under serious consideration seem to be the badly potholed highways of President Obama’s road map.

Israel’s leaders are now wasting precious time with their polite considerations of twisted and clichéd American cartographies. Soon, they will need to consider how they should respond to international life in a global state of nature.The specific triggering mechanism of our disordered world’s descent into chaos could originate from a variety of different mass-casualty attacks against Israel, or from similar attacks against other western democracies. Even the traditionally “powerful” United States would not be immune to this starkly remorseless vulnerability.

Chaotic disintegration of the world system would, among other things, transform the Israeli system. Such a transformation could involve total or near-total destruction. In anticipation, Israel will have to orient its strategic planning to an assortment of worst-case prospects, now focusing much more deliberately on a wide range of primarily self-help security options.

For Israel, if it wishes to survive, certain prominent diplomatic processes of peacemaking that are conveniently but erroneously premised on “scientific” assumptions of reason and rationality will have to be renounced.

Israel’s persistently one-sided surrender of territories, its mistaken reluctance to accept certain critical preemption options, and its periodic releases of live terrorists in exchange for slain Jews may never bring about direct defeat. Taken together, however, these synergistic policy errors will have a cumulatively weakening effect on Israel. Whether the principal effect here will be one that “merely” impairs the Jewish State’s commitment to endure, or one that also opens it up operationally to a devastating missile attack, and/or to major acts of terror, is still not clear.

For Israel, anarchy and disorder are inevitable. What might still be avoided, however, are chaos, mega-destruction and early sorrow.

LOUIS RENÉ BERES (Ph.D., Princeton, 1971) lectures and publishes widely on terrorism and nuclear security matters. Born in Zürich, Switzerland, and Chair of Project Daniel (Israel), he is the author of ten books on international relations and international law, including some of the earliest major works on Israel’s nuclear strategy. Professor Beres is Strategic and Military Affairs analyst for The Jewish Press. 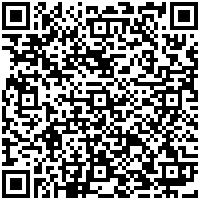