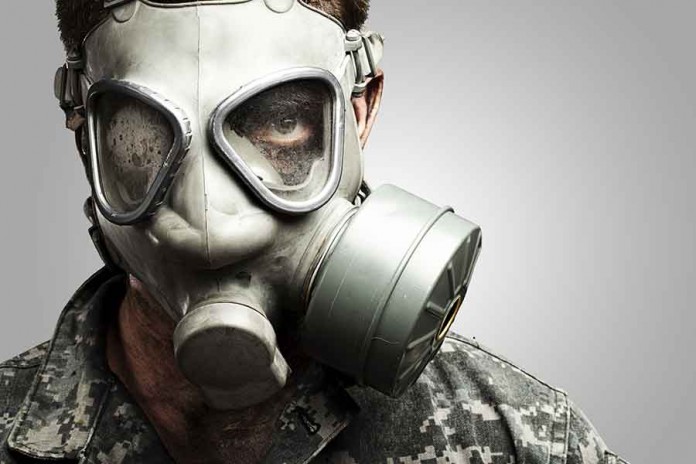 I am a very lucky individual. My grandfather fought in the British army during the First World War. The reason he survived and I am able to write about him, is that he was fortunate enough to be gassed at the battle of the Somme.

The gassing was not enough to kill him of course, but it was bad enough to earn him a discharge from the army and a journey home where he would marry and a few years later become the father of my father.


There is something particularly horrifying about chemical warfare but I am not entirely sure why. It might be because the killer creeps invisibly across a battlefield (apart from chlorine gas which is visible) to kill its victims.

Yet, probably the most deadly killer of that terrible war was the German MG 08 heavy machine gun, which could fire 500 rounds per minute. It too was an invisible killer.

The Germans efficiently set up their machine guns to fire at a specific area raking it with death. The gunners seldom saw the troops they were mowing down and their victims certainly didn’t see the Mauser bullets that flew towards them at 2,881 feet per second. The same is true about artillery.

I suspect the thing about chemical weapons that so appalls me is probably what they do to their victims. There is no instant death here.

I vividly remember reading about that in the WWI war poet, Wilfred Owen’s ironically entitled masterpiece, “Dulce et decorum est pro patria Mori” “It is sweet and noble to die for your country.”

In it, Owen describes seeing a victim of a Mustard Gas attack on British troops…

In all my dreams before my helpless sight,
He plunges at me, guttering, choking, drowning.
If in some smothering dreams, you too could pace
Behind the wagon that we flung him in,
And watch the white eyes writhing in his face,
His hanging face, like a devil’s sick of sin;
If you could hear, at every jolt, the blood
Come gargling from the froth-corrupted lungs…

The poem came back to my mind when I heard about Saddam Hussein’s chemical attack on the Kurdish villagers of Halabja in 1988.

The incident was the largest chemical weapons attack directed against a civilian populated area in history. It killed between 3,200 and 5,000 people and injured between 7,000 to 10,000 more.

Putin’s ally President Assad of Syria has repeatedly used chemical weapons in his country. This was the famous 2012, “Red Line” that Obama warned them not to cross and then did absolutely nothing about when they did.

The photographs that accompanied those horrors made Owen’s appallingly brilliant word picture, quite unnecessary.

I think that is why, from all of the terrible and shocking news coming from the war in Ukraine, the CIA’s suggestion that Vladimir Putin is considering using chemical weapons, has been to my mind, the most chilling.

Yet his veiled threat to use tactical battlefield nuclear weapons is logically just as chilling and the effects of those on human beings, (particularly in the country where Chernobyl occurred ) just as horrific.

And still, I am more upset by the thought of chemical warfare and I don’t think it is because my grandfather experienced it.

I suspect it is because of something fundamentally Jewish, the Torah’s statement that we were created in the image of Hashem.

Of course, that is not meant to be taken literally (with apologies to Michelangelo) but there is a powerful message in that famous Torah verse that speaks to this latest hellish Russian threat.

It is that human beings, so beautifully crafted and created by Hashem to be His ultimate masterpiece, could be so violated and changed that his or her white eyes could be writhing in their face, to resemble, “a devil’s sick of sin.”

I just listened to a podcast of the WSJ columnist, Gerard Baker interviewing the brilliant and renowned Scottish Historian, Niall Ferguson.

Ferguson explained that Russia’s war under Putin is simply a continuation of three hundred years of history. “The problem,” he said, “is that most politicians and journalists knowledge does not extend much before the twentieth century.” If they studied history he argued, they would see a simple continuation and repetition of what came before; albeit without Chemical weapons or tactical battlefield Nukes. “The West” Ferguson lamented, “Simply did not believe that people behaved like Putin anymore.”

The ”West” long ago also stopped believing in the Bible. That is a pity.

In it, Shlomo HaMelech reminds us, “There is nothing completely new under the sun.” Nothing really changes.

Another “problem” for the West is that Vladimir Putin does study history and looks to the past both ancient and recent.

It is clear to him that Obama’s Vice President’s response to his Ukraine war is just as toothless and meaningless as that of his old boss. Last year the Biden administration actually reduced military aid to Ukraine, despite Putin making his intentions clear.

The State of Israel has already once steeled itself for chemical attack, when Saddam threatened it in response to the U.S. and its Allies attacking him in the 1991 Gulf War.

I wrote in my last piece before Russia launched its war, that Iran is part of an axis with Russia and China. Putin stated openly that he intended to take Ukraine, China’s Xi Jinping has declared he will take Taiwan. Iran has made its intentions and ambitions towards Israel clear too.

The West has just been stalled in giving Iran everything it wants in the Biden administration’s rush to undo President Trump’s sanctions. Ironically, it is Russia that has derailed the deal as it wants to be able to trade with Teheran free from Western sanctions linked to Ukraine.

And that demonstrates another recurring historical phenomenon; the willingness of the world to throw the Jewish people under the bus when it is politically expedient.

So just in case you did not believe that people behaved like that anymore, remember Shlomo HaMelech’s words… nothing’s really changed.