While a definitive account of what transpired on that now notorious Frontier Airlines Miami-La Guardia flight on Sunday night remains to be assembled, there is already strong evidence on the public record that a number of Jewish passengers were victims of anti-Semitism at the hands of Frontier personnel.

According to the airline, “a large group of passengers repeatedly refused to comply with the U.S. government’s federal mask mandate” and were ordered to leave the aircraft. The ensuing tumult caused the flight to be canceled, the airline said. The passengers involved were chassidim who maintained that, at the time of the confrontation, they were all wearing masks except for an infant under the age of two, an age exempted by the federal rules. They insist that airline personnel harped on the unmasked baby.


Airline personnel say they were not fixated on the child but were rather concerned with a wider violation of the rules.

We can avoid the “he said she said” dilemma by, as they say in the sports world, looking at the videotape. And indeed, in footage of the flight, all the visible passengers are wearing masks, and at one point, the father of the maskless baby can be seen and heard explaining to a flight attendant that the child is under the age of two.

Video also captures the comments of several other passengers condemning the treatment of the chassidim. Perhaps most disturbing, one video captured the complaint by one non-chassidic passenger that he saw flight personnel high-fiving each other as the chassidim were forced to deplane.

Although we are satisfied that we already know enough to conclude that there was anti-Semitism involved, it’s possible that information favorable to Frontier may not have been picked up by the available video. So in order to get the skeptics on board, we support an investigation. But we suggest the folks at Frontier should start preparing their mea culpas. 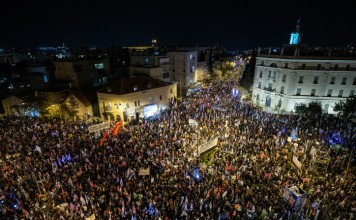 Bibi and the Babylonian Talmud